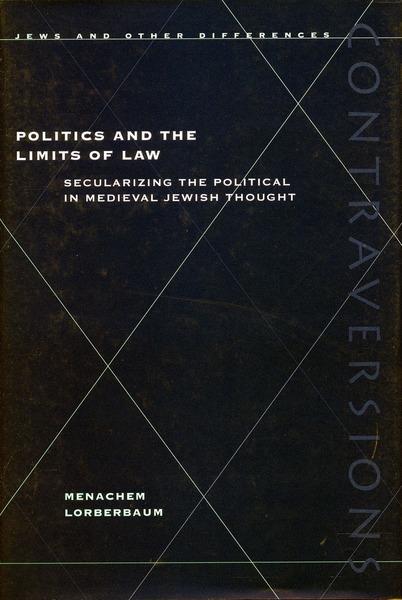 Politics and the Limits of Law
Secularizing the Political in Medieval Jewish Thought
Menachem Lorberbaum
SERIES: Contraversions: Jews and Other Differences

This book explores the emergence of the fundamental political concepts of medieval Jewish thought, arguing that alongside the well known theocratic elements of the Bible there exists a vital tradition that conceives of politics as a necessary and legitimate domain of worldly activity that preceded religious law in the ordering of society.

Since the Enlightenment, the separation of religion and state has been a central theme in Western political history and thought, a separation that upholds the freedom of conscience of the individual. In medieval political thought, however, the doctrine of the separation of religion and state played a much different role. On the one hand, it served to maintain the integrity of religious law versus the monarch, whether canon law, Islamic law, or Jewish law. On the other hand, it upheld the autonomy of the monarch and the autonomy of human political agency against theocratic claims of divine sovereignty and clerical authority.

Postulating the realm of secular politics leads the author to construct a theory of the precedence of politics over religious law in the organization of social life. He argues that the attempts of medieval philosophers to understand religion and the polity provide new perspectives on the viability of an accommodation between revelation and legislation, the holy and the profane, the divine and the temporal.

The book shows that in spite of the long exile of the Jewish people, there is, unquestionably, a tradition of Jewish political discourse based on the canonical sources of Jewish law. In addition to providing a fresh analysis of Maimonides, it analyzes works of Nahmanides, Solomon ibn Adret, and Nissim Gerondi that are largely unknown to the English-speaking reader. Finally, it suggests that the historical corpus of Jewish political writing remains vital today, with much to contribute to the ongoing debates over church-state relations and theocratic societies.

Menachem Lorberbaum is Lecturer in Jewish Philosophy at Tel Aviv University and Research Fellow at the Shalom Hartman Institute, Jerusalem. He is co-editor of The Jewish Political Tradition: Volume 1, Authority.

" . . . Lorberbaum has provided an excellent study about timely issues in medieval Jewish thought."