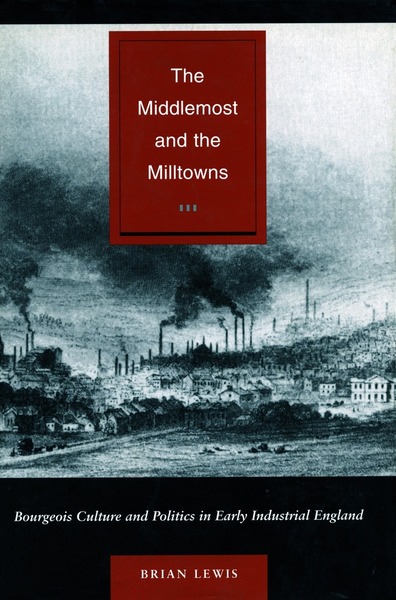 This book seeks to enrich our understanding of middle-class life in England during the Industrial Revolution. For many years, questions about how the middle classes earned (and failed to earn) money, conducted their public and private lives, carried out what they took to be their civic and religious duties, and viewed themselves in relation to the rest of society have been largely neglected questions. These topics have been marginalized by the rise of social history, with its predominant focus on the political formation of the working classes, and by continuing interest in government and high politics, with its focus on the upper classes and landed aristocracy.

This book forms part of the recent attempt, influenced by contemporary ideas of political culture, to reassess the role, composition, and outlook of the middle classes. It compares and contrasts three Lancashire milltowns and surrounding parishes in the early phase of textile industrialization—when the urbanizing process was at its most rapid and dysfunctional, and class relations were most fraught. The book’s range extends from the French Revolution to 1851, the year of the Great Exhibition, which symbolized mid-century stability and prosperity.

The author argues that members of the middle class were pivotal in the creation of this stability. He shows them creating themselves as a class while being created as a class, putting themselves in order while being ordered from above. The book shifts attention from the search for a single elusive “class consciousness” to demonstrate instead how the ideological leaders of the three milltowns negotiated their power within the powerful forces of capitalism and state-building. It argues that, at a time of intense labor-capital conflict, it was precisely because of their diversity, and their efforts to build bridges to the lower orders and upper class, that the stability of the liberal-capitalist system was maintained.

Brian Lewis is Associate Professor of History at McGill University.

"This well-written and thoughtful study, drawing together the concerns of social, political, and cultural history, is a major contribution to our growing understanding of the middle class and its place in the making of the modern world."

"This is a fine book with a sound thesis that every historian of early industrial development should read."