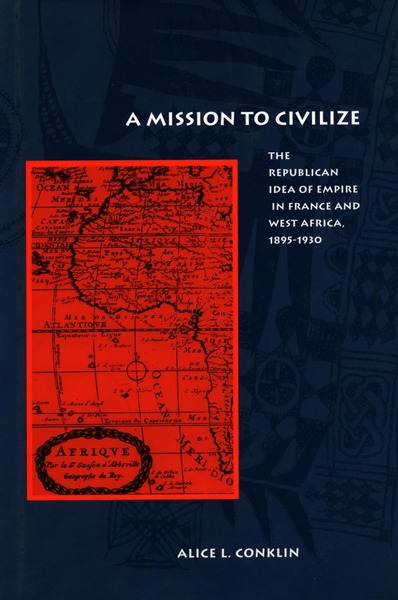 A Mission to Civilize
The Republican Idea of Empire in France and West Africa, 1895-1930
Alice L. Conklin

This book addresses a central but often ignored question in the history of modern France and modern colonialism: How did the Third Republic, highly regarded for its professed democratic values, allow itself to be seduced by the insidious and persistent appeal of a “civilizing” ideology with distinct racist overtones? By focusing on a particular group of colonial officials in a specific setting—the governors general of French West Africa from 1895 to 1930—the author argues that the ideal of a special civilizing mission had a decisive impact on colonial policymaking and on the evolution of modern French republicanism generally.

French ideas of civilization—simultaneously republican, racist, and modern—encouraged the governors general in the 1890’s to attack such “feudal” African institutions as aristocratic rule and slavery in ways that referred back to France’s own experience of revolutionary change. Ironically, local administrators in the 1920’s also invoked these same ideas to justify such reactionary policies as the reintroduction of forced labor, arguing that coercion, which inculcated a work ethic in the “lazy” African, legitimized his loss of freedom. By constantly invoking the ideas of “civilization,” colonial policy makers in Dakar and Paris managed to obscure the fundamental contradictions between “the rights of man” guaranteed in a republican democracy and the forcible acquisition of an empire that violates those rights.

In probing the “republican” dimension of French colonization in West Africa, this book also sheds new light on the evolution of the Third Republic between 1895 and 1930. One of the author’s principal arguments is that the idea of a civilized mission underwent dramatic changes, due to ideological, political, and economic transformations occurring simultaneously in France and its colonies. For example, revolts in West Africa as well as a more conservative climate in the metropole after World War I produced in the governors general a new respect for “feudal” chiefs, whom the French once despised but now reinstated as a means of control. This discovery of an African “tradition” in turn reinforced a reassertion of traditional values in France as the Third Republic struggled to recapture the world it had “lost” at Verdun.

Alice L. Conklin is Associate Professor of History at the University of Rochester.