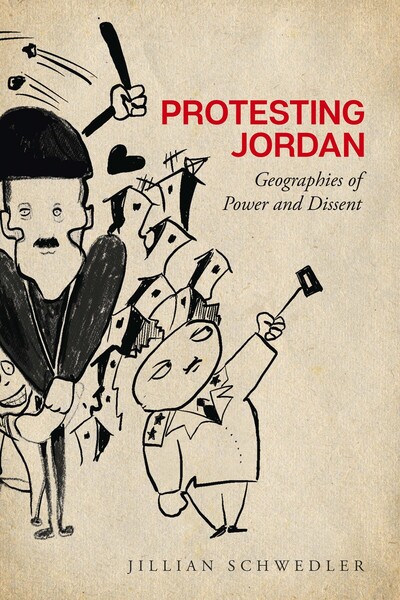 Protest has been a key method of political claim-making in Jordan from the late Ottoman period to the present day. More than moments of rupture within normal-time politics, protests have been central to challenging state power, as well as reproducing it—and the spatial dynamics of protests play a central role in the construction of both state and society. With this book, Jillian Schwedler considers how space and geography influence protests and repression, and, in challenging conventional narratives of Hashemite state-making, offers the first in-depth study of rebellion in Jordan.

Based on twenty-five years of field research, Protesting Jordan examines protests as they are situated in the built environment, bringing together considerations of networks, spatial imaginaries, space and place-making, and political geographies at local, national, regional, and global scales. Schwedler considers the impact of time and temporality in the lifecycles of individual movements. Through a mixed interpretive methodology, this book illuminates the geographies of power and dissent and the spatial practices of protest and repression, highlighting the political stakes of competing narratives about Jordan's past, present, and future.

Jillian Schwedler is Professor of Political Science at Hunter College and the Graduate Center, City University of New York. She is the author of Faith in Moderation: Islamist Parties in Jordan and Yemen (2006).

"Protesting Jordan offers readers of Arab politics and contentious politics alike a narrative of how protest shapes how states reproduce their power and, in turn, reshape protest. Jillian Schwedler blends a deep immersion in the Middle East with a firm grasp of contentious politics theory in this thought-provoking book."

"Superbly researched, Protesting Jordan provides a fascinating and groundbreaking alternative history of Jordan. Jillian Schwedler skillfully unpacks and challenges traditional accounts of state-making in Jordan as a top-down process. An essential read for those seeking to better understand Jordan's history and how protests maintain state power."

"It's not just the best book I've read about Jordan... but also one of the very best political science books I've read this year... Protesting Jordan should be a must read for scholars of the Middle East and of comparative politics more broadly, as well as for analysts, journalists and policymakers trying to understand the country's politics."

"[Protesting Jordan] gives a detailed and rich account of Jordan's social and political history, showing how repertoires of protest and repression created, transformed, and continue to afect state and society in Jordan. But the book is also written in a way that makes it essential reading for any scholar interested in protests, repression, and state development – not just in Jordan, but indeed anywhere else."

"Protesting Jordan is an important contribution to the study of protest. It is a cry and demand not only for scholars to carry on the critical work of studying popular struggle to illuminate its social significance but to forge novel approaches to understand the state, its political economy and urban form."

"Schwedler's work pushes us to think about the effects of social movements above and beyond narrow conceptions of success or failure; the book traces and convincingly demonstrates the myriad ways that regimes learn from protest activity and deploy repressive state power through the construction (or lack thereof) of cities and communities."

"Protesting Jordan is a wonderful read and an ambitious model for writing contentious politics into political history. ... Schwedler is one of our field's great ethnographic writers, and her keen eye for meaningful details and almost-imperceptible shifts in power relations rendered this routine set of protests into powerful grounds for theorizing about the everyday work of contention."

Protesting Jordan, Climate Change in the Gulf, and Social Development in Iran

Project on Middle East Political Science (POMEPS)
Between the Lines: Jillian Schwedler on Protest in Jordan