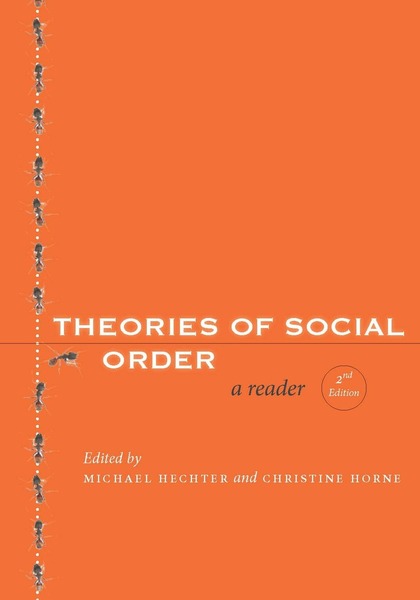 Already a standard in its first edition, this newly expanded and reorganized reader provides a compelling exploration of what arguably remains the single most important problem in social theory: the problem of social order. Contending that theory's purpose in the social sciences lies in its ability to explain real-world phenomena, Theories of Social Order presents classic texts alongside contemporary theoretical extensions and recent empirical applications.

Building on the success of the first edition, the second edition focuses readings around five key social structures that affect social order: individuals, hierarchies, markets, groups, and networks. Its unique approach—focusing on theories rather than theorists—encourages students to compare various factors and mechanisms, seek common analytical themes, and develop a deeper theoretical understanding of the problem of social order. By pairing alternative explanations with empirical research, it helps students grasp the essential lesson that social theory must have empirical implications. This critical lesson emphasizes the relevance of theory to real life, the research enterprise, and the development of better social policies.

Added readings in the second edition highlight the extent to which the problem of social order is of interest across the sciences and demonstrate the relevance of social order in understanding gender and ethnic group dynamics. Editorial introductions to each section discuss the causal mechanisms in each theory and make clear links between classical and modern texts.

"...I could not wait to turn the page. The key to its readability is not only the short and well-drawn excerpts, but also the enlightening way they are knitted together by the editors, Michael Hechter and Christine Horne.... This book will surely inspire many social scientists to give more attention to theory and integrate it more effectively in empirical research. It also brings out the editors' argument that the best explanations of social phenomena point out both causal factors and the mechanism by which they work."

"The second edition of this remarkable innovative text is closely aligned to what many of us believe is the most important development in 21st century social science, namely, a growing consensus that effective theories are those that specify mechanisms to account for phenomena to be explained."

"Theories of Social Order is already an essential addition to any undergraduate theory course because of the unique way in which it challenges students to address the landscape of ideas, focusing on areas of agreement and disagreement between different major theorists. The new addition adds to this by clearly showing how the work of a diverse set of important contemporary theorists of social order developed from earlier debates."

"Too often, social theory can seem abstract, dissociated from the intrigues of the social world. In Theories of Social Order, Hechter and Horne smartly reverse this tendency in two ways. First, the readings they include focus on a central and long-standing theoretical puzzle—social order—across a range of topics, from individuals to hierarchies to networks. Second, they insist that the best theories traffic in explanations of real-world phenomena. The result is a fascinating compilation that will enrich the sociological imaginations of both students and the scholars who teach them."

"I have used Michael Hechter and Christine Horne's book Theories of Social Order: A Reader in my courses of Social Theory at DePaul University for several years. I have obtained much better results with my students than I did with previous textbooks I used. The reason is that Hechter and Horne have a very original focus on theories rather than on theorists, which makes it easier for students to understand the arguments and compare different theories. In addition, the authors chose to analyze the very important problem of social order from diverse theoretical perspectives, which allows the application of the theories discussed in their book to current problems related with social order, such as rebellions, wars, economic recessions, social deviance, etc. I look forward to using the second edition of this book in my classes, which has been improved significantly with the re-arrangement of topics and theories as well as the addition of new materials and theories relevant to contemporary problems of social order. I am sure the second edition will be as successful and welcomed as the first one has been."

"Hechter and Horne succeed in presenting the complexity of theoretical thinking without the somnolent verbiage so typical of some of the classical theorists. They present direct connections between theoretical concepts and empirical research. But the most attractive aspect of the book is that it avoids the typical conventions used to teach theory: somewhat arbitrary categorizations by paradigm, chronology, and biography, in favor of looser and overlapping ideas and approaches to the problem of social order. The result is a book that emphasizes the convergences of theoretical thinking in sociology, without presenting a level of disciplinary integration that doesn't exist. The book does a very good job of teaching students how to think sociologically." 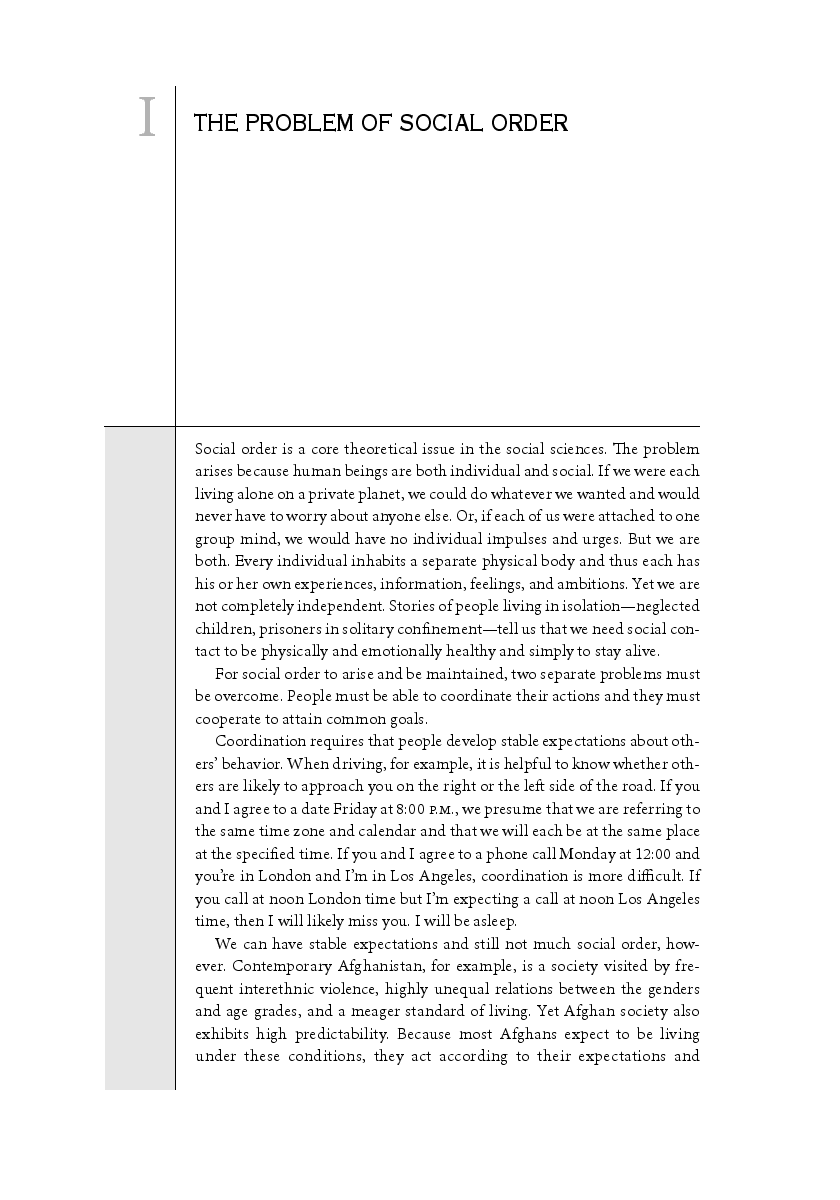 Part I: The Problem of Social Order 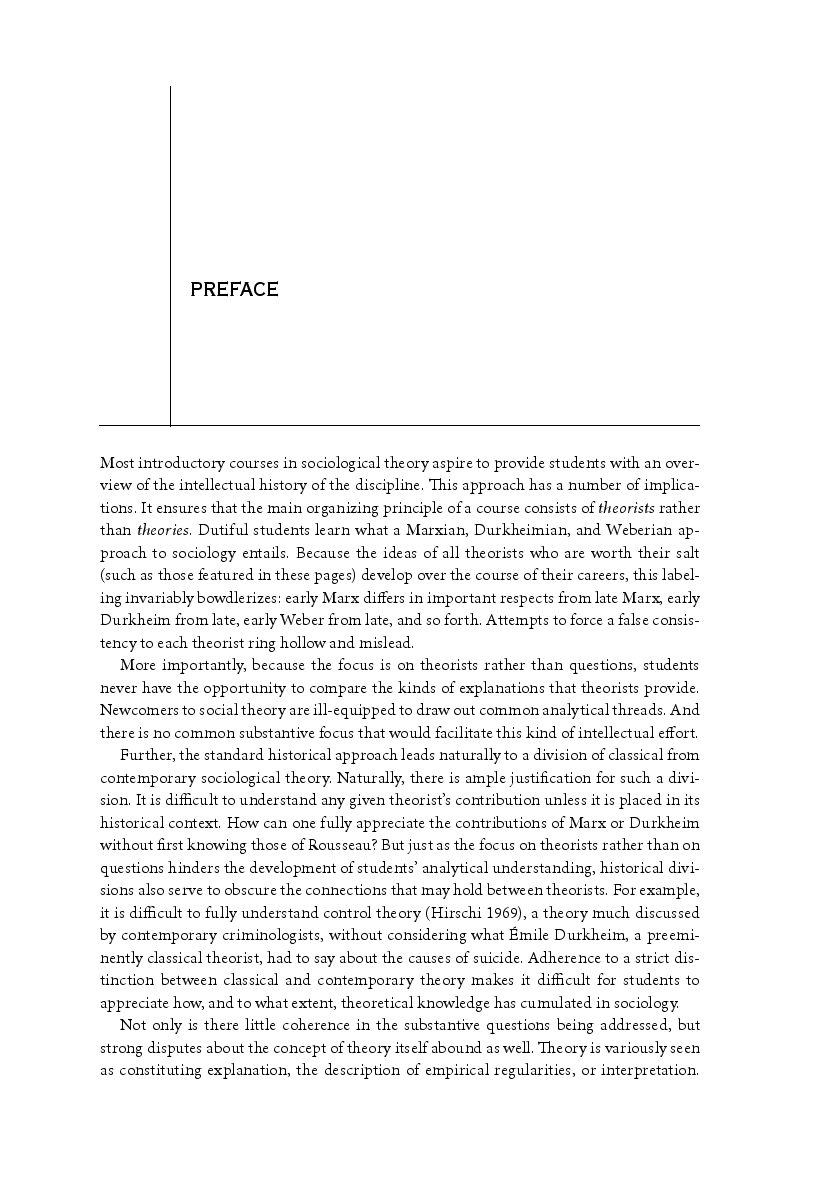 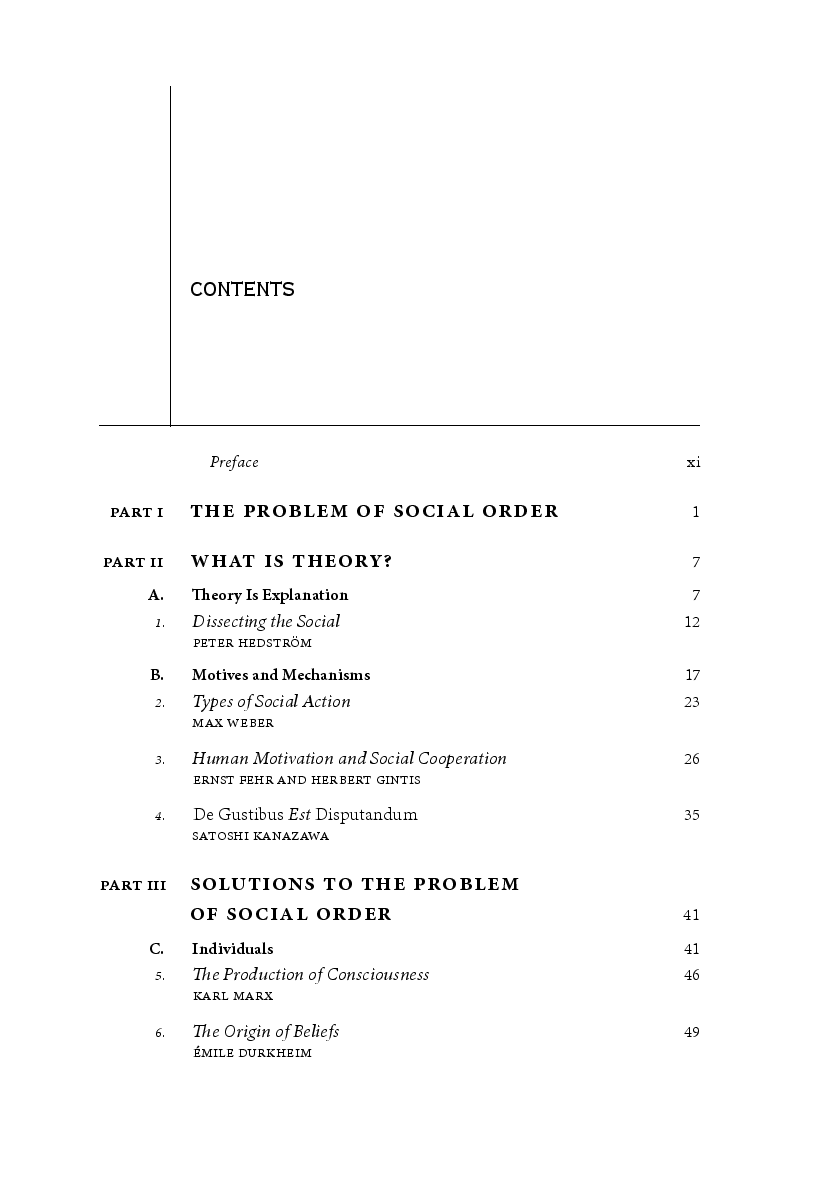