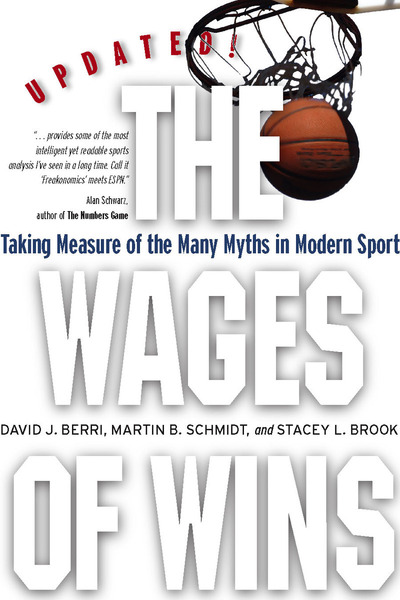 The Wages of Wins
Taking Measure of the Many Myths in Modern Sport. Updated Edition
David J. Berri, Martin B. Schmidt, and Stacey L. Brook

Arguing about sports is as old as the games people play. Over the years sports debates have become muddled by many myths that do not match the numbers generated by those playing the games. In The Wages of Wins, the authors use layman's language and easy to follow examples based on their own academic research to debunk many of the most commonly held beliefs about sports.

In this updated version of their book, these authors explain why Allen Iverson leaving Philadelphia made the 76ers a better team, why the Yankees find it so hard to repeat their success from the late 1990s, and why even great quarterbacks like Brett Favre are consistently inconsistent. The book names names, and makes it abundantly clear that much of the decision making of coaches and general managers does not hold up to an analysis of the numbers. Whether you are a fantasy league fanatic or a casual weekend fan, much of what you believe about sports will change after reading this book.