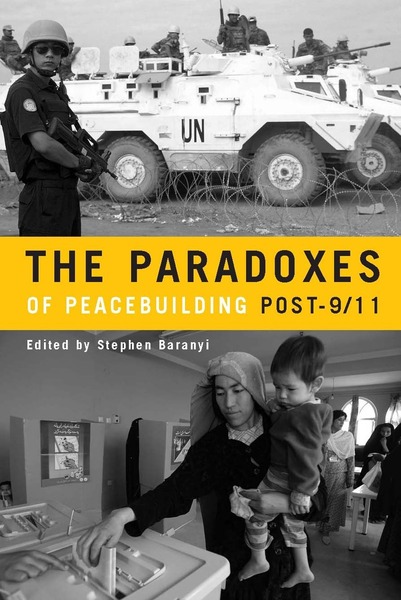 The Paradoxes of Peacebuilding Post-9/11
Edited by Stephen Baranyi

What kind of peace is possible in the post-9/11 world? Is sustainable peace an illusion in a world where foreign military interventions are replacing peace negotiations as starting points for postwar reconstruction?

Grappling with these questions, this book presents six provocative case studies authored by respected peacebuilding practitioners in their own societies. The studies address two cases of relative success (Guatemala and Mozambique), three cases of renewed but deeply fraught efforts (Afghanistan, Haiti, and the Palestinian Territories), and the case of Sri Lanka, where peacebuilding was aborted but where the outlines of a new peace process can be discerned. The book also includes original analyses of demobilization, disarmament, and reintegration processes in three different contexts, written by teams of analysts from both the Northern and Southern hemispheres.

In this timely volume—which will interest practitioners, students and policymakers—Baranyi gives a voice to Southern researchers in what has been historically a Northern-dominated debate.

Stephen Baranyi is Principal Researcher on Conflict Prevention at the North-South Institute in Ottawa.

More in Politics—Democracy and Human Rights