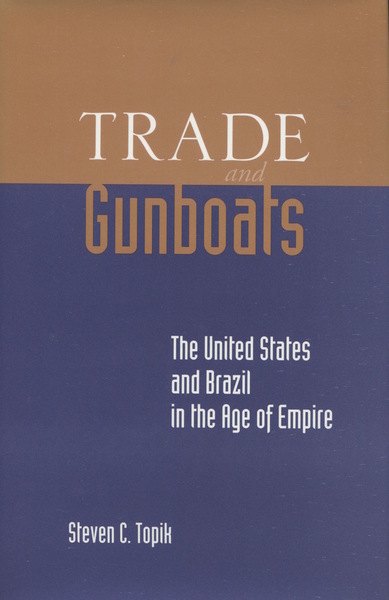 Trade and Gunboats
The United States and Brazil in the Age of Empire
Steven C. Topik

A hundred years ago, the United States first projected itself onto the international stage, hoping to stake out a sphere of influence in Latin America just as the largest of Latin American countries, Brazil, ending a 67-year-long monarchical regime, struggled to redefine its relationship to the world economy. Debates raged between liberals and corporatists, between free traders and protectionists. When the trajectories of these two unequal giants collided, their interaction revealed much about the international economic and political affairs of their day that bears upon the debates surrounding today’s “new world order.”

The book begins by examining the Blaine-Mendonca Accord of 1891, the first commercial pact ever signed between Brazil and the United States, thus beginning a special relationship that lasted into the 1970’s. This is the first study of U.S.-Brazilian relations that seriously examines the internal politics and economics of both countries and how they played themselves out in the late nineteenth century. The author attempts a new kind of international history, comparative political economy, that examines not only internal dynamics but also the nature of the international regime at the time.

"Few works in the history of U.S. foreign relations offers as much breadth and depth as this. Trade and Gunboats should be a model for those who aspire to write diplomatic history."

"Topik has written a fine case study. It should be the model for future works."

"A superb piece of work. For some years historians, especially in the diplomatic field, have criticized U.S.-oriented writing and have pleaded for work that examines crises from more than the U.S. side. Topik has provided a model study in this regard. . . . Stunning use of archival sources from several countries."

"It is a considerable achievement to link so clearly the politics of two large and growing states in their effects on diplomacy; the author deserves credit for both his methodology and its product. Notable for its new information and fresh viewpoint."

"Topik has produced an outstanding study of trade rivalry between the U.S. and Brazil at the end of the nineteenth century. Trade and Gunboats adds admirably to what is known about the history of both countries. . . . It poses menaingful questions and answers them lucidly. This superbly crafted and timely work raises diplomatic history to a higher level."