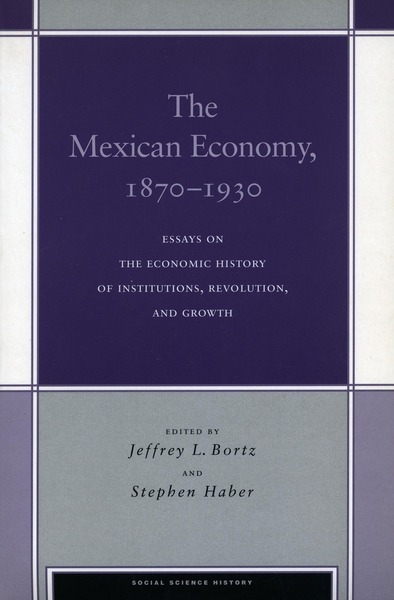 Until the last decades of the nineteenth century, Mexico faced the twin problems of chronic political instability and slow economic growth. During the period of the Porfirio Díaz dictatorship (1876-1911), however, a series of institutional reforms reignited growth and created rents that enabled the Díaz government to threaten its opponents with military force or to buy them off.

These institutional reforms came out of distinctly political processes, which often had to be brokered among multiple groups of economic elites and regional political bosses. Therefore, they were often structured to encourage investment by specifying property rights or creating streams of rents for particular entrepreneurs. In short, Porfirian Mexico is an excellent natural laboratory in which to investigate not only how institutional change can foment economic growth, but also how specific features of political institutions give rise to specific economic institutions that have both positive and negative effects on growth and distribution.

In fact, the distributional consequences of the Porfirian regime gave rise to the Mexican Revolution of 1910-1917, which produced a further round of dramatic changes in Mexico’s political institutions. These changes, in turn, restructured the institutions that governed property rights and those that determined the allocation of rents generated by property rights. This book aims both to identify the crucial institutions and to measure their economic effects.

In addressing these issues, the contributors to this volume employ theoretical insights from the New Institutional Economics and statistical hypothesis-testing as well as traditional archival methods. Thus, in addition to advancing the field of Latin American economic history by studying the interaction of political and economic institutions during the period 1870-1930, the book also makes a methodological contribution by using analytic tools not previously employed in the literature.

Jeffrey Bortz is Professor of History at Appalachian State University, and the author of various studies on unions, wages, and textile workers in Mexico. Stephen Haber is Professor of Political Science and History, and Peter and Helen Bing Fellow of the Hoover Institution, at Stanford University. He is the author of Industry and Underdevelopment: The Industrialization of Mexico, 1890-1940 (Stanford, 1989) and editor of How Latin America Fell Behind: Essays on the Economic Histories of Brazil and Mexico, 1850-1914 (Stanford, 19

"This group of essays employs innovative methods, utilizes new sources, and reaches a variety of important conclusions about the Mexican economy during the Porfirian and revolutionary eras. It is a significant addition to the growing body of scholarship on the period."