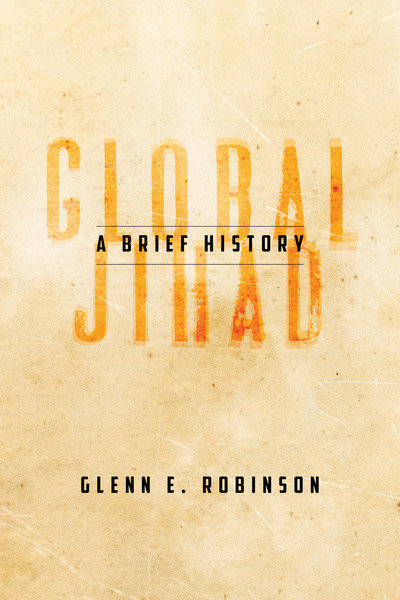 Named a 2021 Best Book of the Year by Foreign Policy.

Named a 2021 Best Book of the Year (Middle East Category) by Foreign Affairs.

Most violent jihadi movements in the twentieth century focused on removing corrupt, repressive secular regimes throughout the Muslim world. But following the 1979 Soviet invasion of Afghanistan, a new form of jihadism emerged—global jihad—turning to the international arena as the primary locus of ideology and action. With this book, Glenn E. Robinson develops a compelling and provocative argument about this violent political movement's evolution.

Global Jihad tells the story of four distinct jihadi waves, each with its own program for achieving a global end: whether a Jihadi International to liberate Muslim lands from foreign occupation; al-Qa'ida's call to drive the United States out of the Muslim world; ISIS using "jihadi cool" to recruit followers; or leaderless efforts of stochastic terror to "keep the dream alive." Robinson connects the rise of global jihad to other "movements of rage" such as the Nazi Brownshirts, White supremacists, Khmer Rouge, and Boko Haram. Ultimately, he shows that while global jihad has posed a low strategic threat, it has instigated an outsized reaction from the United States and other Western nations.

Glenn E. Robinson is on the faculty at the Naval Postgraduate School in Monterey, California, and is affiliated with the Center for Middle Eastern Studies at the University of California, Berkeley. He has served as an expert advisor to USAID and the US Department of Defense.

"Glenn Robinson makes a signal contribution to our understanding of the history and the essence of global jihad. This concise book delivers much more than its modest title promises, and renders comprehensible the causes of global jihad since the 1980s."

"Glenn Robinson has produced a masterful book that is incisive, insightful, and comprehensive—a tour de force on the evolution of jihadism. For anyone interested in better understanding the contemporary politics of the Middle East and Islam, Global Jihad is essential reading."

—Mehran Kamrava, author of Inside the Arab State

"Glenn Robinson brilliantly dissects the religious ideology underpinning jihadist movements, as well as the social factors that draw young Muslims to them. With Global Jihad, he outlines what attracts young people to the nihilistic violence of 'movements of rage,' all framed in a story bigger than themselves."

"If you have been searching for an accessible introduction to jihadism, look no further. In Global Jihad: A Brief History, Glenn Robinson masterfully summarizes five decades of jihadi history with the insight and accuracy that only a veteran scholar with deep area knowledge can provide. Highly recommended for anyone seeking to understand 9/11, ISIS, and the future of militant Islamism."

—Thomas Hegghammer, author of The Caravan: Abdallah Azzam and the Rise of Global Jihad

"Global Jihad is provocative, informative, and beautifully written. Robinson provides a superb analysis of global jihad's leadership, violence, goals, and support from the 1980s to 2020. An essential guide for policymakers, soldiers, diplomats, and anyone seeking to understand and deal with radical and extremist Islam."

"Robinson provides a synthetic and remarkably comprehensive account of the evolution of political jihad since it came to global prominence in the 1980s. He sketches four waves of jihadi activity: the international call to expel the Soviets from Afghanistan during the 1980s, the anti-American focus of Osama bin Laden and al Qaeda, the rejection by the so-called Islamic State (or isis) of the international system, and the proliferation of "lone wolf" actions fueled by radicalization on the Internet. Robinson provides both an accessible history and a provocative analysis of one of the most important political movements in the world over the last half century."

"Robinson's narrative is clear and concise, and it is not overburdened by unnecessary bibliography. His book is a real contribution to scholarship and public discourse; ideally, it should be read both inside and outside of academia."