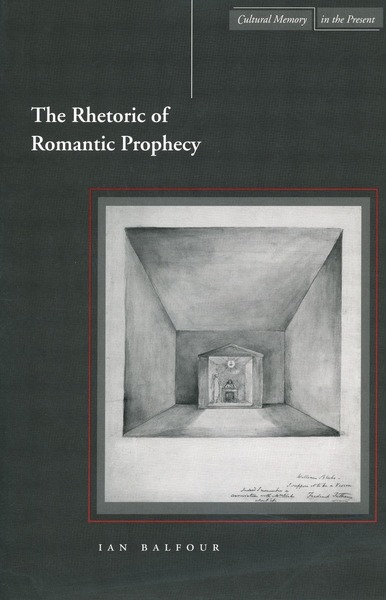 The Rhetoric of Romantic Prophecy
Ian Balfour
SERIES: Cultural Memory in the Present

1st place in the 2002 Jean-Pierre Barricelli Prize, sponsored by the American Conference on Romanticism.

1st place in the 2003 Aldo and Jeanne Scaglione Prize for Comparative Literary Studies, sponsored by the Modern Language Association of America.

The Romantic era in England and Germany saw a sudden renewal of prophetic modes of writing. Biblical prophecy and, to a lesser extent, classical oracle again became viable models for poetry and even for journalistic prose. Notably, this development arose out of the new-found freedom of biblical interpretation that began in the mid-eighteenth century, as the Bible was increasingly seen to be a literary and mythical text.

Taking Walter Benjamin’s thinking about history as a point of departure, the author shows how the model for Romantic prophecy emerges less as a prediction of the future than as a call to change in the present, even as it quotes, at key turns, texts from the past. After surveying developments in eighteenth-century biblical hermeneutics, as well as the numerous instances of prophetic eruption in Romantic poetry, the book culminates in close readings of works by Blake, Hölderlin, and Coleridge.

Each of these writers interpreted the Bible in strong, variously radical and conservative ways, and each reworked prophetic texts in often startling fashion. The author’s reading of Blake focuses on the complex temporal and rhetorical dynamics at work in a prophetic tradition, with attention paid to the key mediating figure of Milton. The chapter on Hölderlin investigates the truth-claim of poetry and the consequences of Hölderlin’s insight into the necessarily figural character of poetry. The analysis of Coleridge correlates his theory of allegory and symbol with his theory and practice of political writing, which often relies on mobilizing prophetic authority. Together, the readings force us to reexamine the claims and practices of Romantic poets and thinkers and their ideas and ideologies, not without engendering some allegorical resonance with issues in our own time.

"...a book to which scholars are likely to return frequently. Each chapter seems to follow the Keatsian maxim to load every rift with ore...[T]he richness of the book is finally one of its strengths, making it a storehouse of insights and ideas. Throughout, the readings are scrupulous, imaginative, and far-reaching. (The engagement with the performativity of romantic writing in Part II is especially rewarding.) With its scholarly range, critical acumen, and theoretical ambition, The Rhetoric of Romantic Prophecy makes an important contribution to the study of Romanticism, textuality, and the prophetic word."

"This is a work of major significance, a study that will not only contribute substantially to our understanding of each of the authors Balfour addresses, but also will change the very field of play in Romantic studies. A brilliant reader of literary and philosophical texts, Balfour has with this book crafted a bold and compelling argument of genuine historical force that will, I believe, be regarded as a landmark study."

" [The Rhetoric of Romantic Prophecy] usefully recontextualizes some of the major poems and texts of the British and German Romantic movements by reminding us of the historical importance of biblical hermeneutics . . . [T]he book's most impressive accomplishment is to demonstrate the high philosophical, theological, and ideological states of arguments about voice, authority, and figurative language and thereby to recover for us a Romanticism that is not simply a thing of the past.