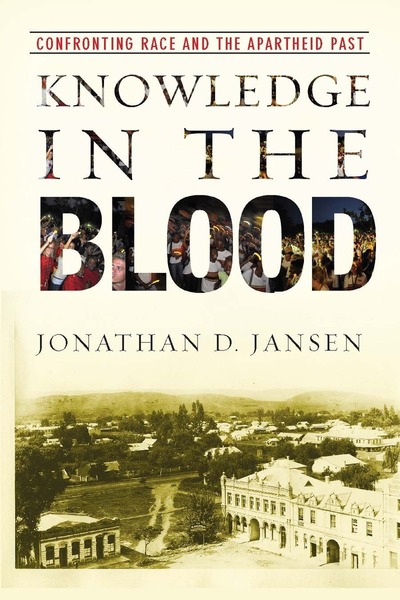 Knowledge in the Blood
Confronting Race and the Apartheid Past
Jonathan D. Jansen

Selected for outstanding recognition within the category, "De-colonizing the curriculum conversation" by the AERA Division B.

Winner of the 2014 Nayef Al-Rodhan Prize, sponsored by the British Academy for the Humanities and Social Sciences.

This book tells the story of white South African students—how they remember and enact an Apartheid past they were never part of. How is it that young Afrikaners, born at the time of Mandela's release from prison, hold firm views about a past they never lived, rigid ideas about black people, and fatalistic thoughts about the future? Jonathan Jansen, the first black dean of education at the historically white University of Pretoria, was dogged by this question during his tenure, and Knowledge in the Blood seeks to answer it.

Jansen offers an intimate look at the effects of social and political change after Apartheid as white students first experience learning and living alongside black students. He reveals the novel role pedagogical interventions played in confronting the past, as well as critical theory's limits in dealing with conflict in a world where formerly clear-cut notions of victims and perpetrators are blurred.

While Jansen originally set out simply to convey a story of how white students changed under the leadership of a diverse group of senior academics, Knowledge in the Blood ultimately became an unexpected account of how these students in turn changed him. The impact of this book's unique, wide-ranging insights in dealing with racial and ethnic divisions will be felt far beyond the borders of South Africa.

"This book is a testament of hope and reconciliation. Jansen's microlevel detail and experiential knowledge provide evidence that the apartheid legacy is not insurmountable . . . Jansen offers valuable insights into universal issues of policy versus practice, ideal versus real, and the often-torturous route to enacting deep change in educational institutions. Anyone interested in the complexities of postapartheid South African education and life in general will find this book a must-read."

"This is a brilliant book, weaving together a description of the integration of the student body and revision of the curriculum at the University of Pretoria, a sophisticated explanation of the transmission of historical knowledge, and a moving personal story. In 2000, Jansen became the first black dean of the faculty of education at the University of Pretoria, following a Fulbright grant to Stanford University and a career at black universities in South Africa. Jansen tells a moving personal story of his efforts—thoughtful and courageous—to open new educational directions for his students, their parents, and his colleagues and explains how family, church, schools, and media shaped an Afrikaans worldview that was transmitted to the next generation even after the end of legal apartheid. He uses philosophical and cognitive theories of historical knowledge to frame the human stories, comparing the South African context with post-Nazi Germany."

"Brave, discerning, and deeply affecting, this study of a South African institution in the midst of historic change, gives us profound insight into the challenges faced by the larger society, as it emerges from a bitterly divisive past into a more hopeful future. Bringing realism and rare moral generosity to the most difficult of conflicts, Jonathan Jansen illuminates the struggles faced by the inheritors of violence, as they move from pride and prejudice to a new and larger knowledge. An act of empathy as well as penetrating analysis, Knowledge in the Blood is an inspiring blueprint for thinking about social and personal transformation, and for extending to a problematic Other an understanding which includes both compassion and asense of justice."

—Eva Hoffman, author of After Such Knowledge

"Knowledge in the Blood conveys an extraordinary sense of time and place, bringing to life the fundamental questions of identity and humanity that students and faculty face in post-Apartheid South Africa. This compelling work casts light on culture, language, and race in a way that no other book ever has. It will undoubtedly command attention."

—Andy Hargreaves, author of Sustainable Leadership and Teaching in the Knowledge Society

"Jonathan Jansen's stunning, deeply rounded story draws you in and never lets go. It is at once an autobiography and a socio-emotional political account of one of the most profound changes facing any nation, the transformation from Apartheid. As the first black Dean in a formerly all-white university, appointed long before the institution was ready for change, Jansen takes us on an incredible journey."

—Michael Fullan, author of The Six Secrets of Change and The Moral Imperative of School Leadership