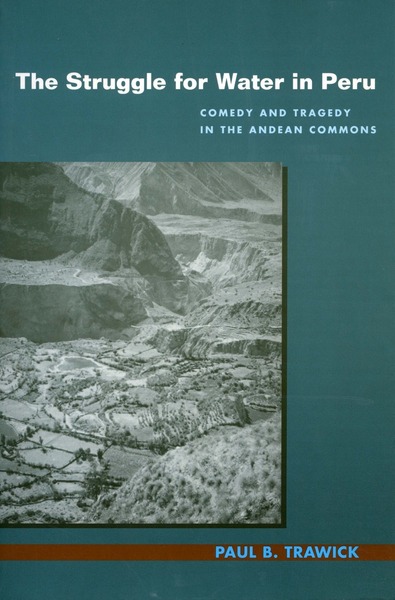 The Struggle for Water in Peru
Comedy and Tragedy in the Andean Commons
Paul B. Trawick

This ecological history of peasant society in the Peruvian Andes focuses on the politics of irrigation and water management in three villages whose terraces and canal systems date back to Inca times. Set in a remote valley, the book tells a story of domination and resulting social decline, showing how basic changes in the use of land, water, and labor have been pivotal in transforming the indigenous way of life.

The author carries out a comparison of contemporary practices in communities that vary systematically along certain dimensions. He analyzes the communities’ similarities and differences in hydraulic organization, landscaping, water use, and other variables. Strikingly diverse patterns appear in local practice, which prove to be the key to unraveling the area’s history.

The book concludes by describing the recent intensification of a water conflict. This struggle between peasants and former landlords ultimately led villagers to rise up against the national government. The story culminates in the violent intrusion of the revolutionary group known as Shining Path.

Paul B. Trawick is Assistant Professor of Anthropology at the University of Kentucky.