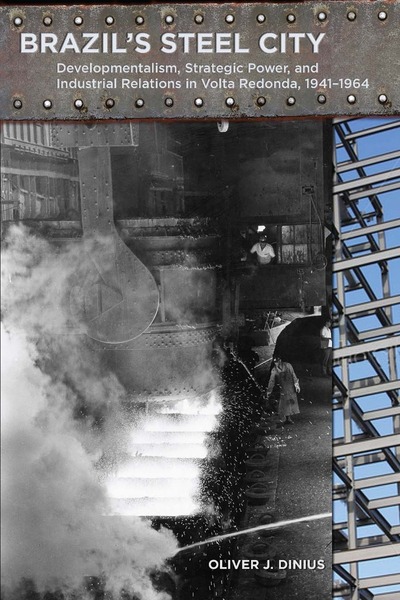 Brazil's Steel City presents a social history of the National Steel Company (CSN), Brazil's foremost state-owned company and largest industrial enterprise in the mid-twentieth century. It focuses on the role the steelworkers played in Brazil's social and economic development under the country's import substitution policies from the early 1940s to the 1964 military coup.

Counter to prevalent interpretations of industrial labor in Latin America, where workers figure above all as victims of capitalist exploitation, Dinius shows that CSN workers held strategic power and used it to reshape the company's labor regime, extracting impressive wage gains and benefits. Dinius argues that these workers, and their peers in similarly strategic industries, had the power to undermine the state capitalist development model prevalent in the large economies of postwar Latin America.

Oliver J. Dinius is Croft Associate Professor of History and International Studies at the University of Mississippi. He is the co-editor of Company Towns in the Americas: Landscape, Power, and Working-Class Communities (2010).

"Oliver Dinius's study, a revision and extension of his 2004 Harvard thesis, provides a most welcome detailed account. His book gives an in-depth treatment of the building of the plant. . . [I]t provides a valuable contribution to Brazilian labor history. . . Oliver Dinius has given us a carefully documented study on an important topic."

"It is an excellent piece of research for understanding the construction of the workers' identity in a context of large state companies and union-State relations."

"Brazil's Steel City is a history of industrial relations and labor-union power in Brazil's first state-sponsored industrial enterprise. . . The structure and pacing of the book are excellent. . . Brazil's Steel City can be usefully read by labor historians, political economists, and industrial historians. It tells a cautionary tale about the pitfalls of paternalism and offers a nod to urban historians in the passages on the company town of Volta Redonda. Brazilians will want to read this book alongside Barbara Weinstein's For Social Peace in Brazil and John French's Drowning in Laws."

"... the narrative is elegant and easy to follow, making [Brazil's Steel City] a great reading for courses on labor history or modern Latin America."

"...Brazil's Steel City is a multi-layer, well-researched, nicely written analysis, which appropriately combines elements of social, labour and political histories to suggest a more complex and nuanced view of traditionally held interpretations of the country's evolution towards its current powerful industralized status."

"The book's most original contribution lies in its combination of business history, knowledge of the production process, and quantification . . . In its wide-ranging research and emphasis on industrial and labor relations, Dinius's work has the admiration of this reviewer."

"[Brazil's Steel City] is unquestionably the single best book on Volta Redonda, and should be read by anyone interested in Latin American labour, economic, and political history of the era."

"This book contributes a new understanding of labor and business history in Brazil. Unlike other works in Brazilian labor history, this one deals with one of the most strategic industries in Brazil, one that is state-owned and central to the development plans of Brazilian political elites. The very special labor history presented in Brazil's Steel City forces us to rethink those other studies of (largely privately owned) industries."

"This is an outstanding work that provides by far the most complete reconstruction of the history of Volta Redonda, the most emblematic case in Brazilian industrialization. A staggering amount of work must have gone into the collection and presentation of the data, and the author's use of interviews, company records, and political police files to construct his argument is truly impressive." 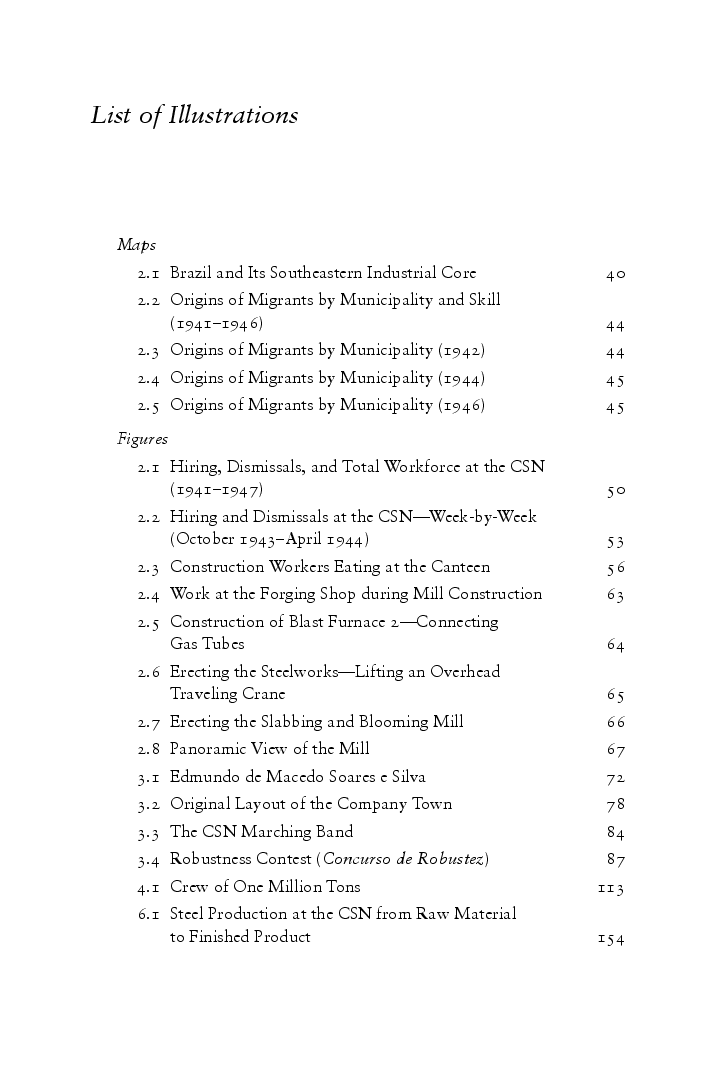 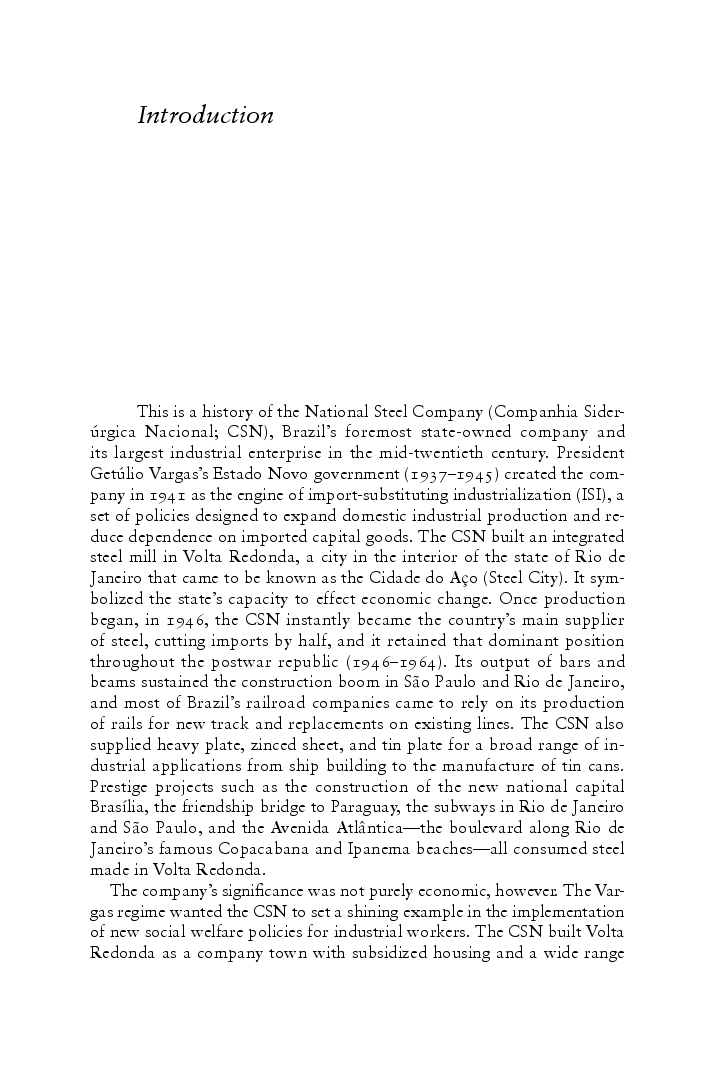 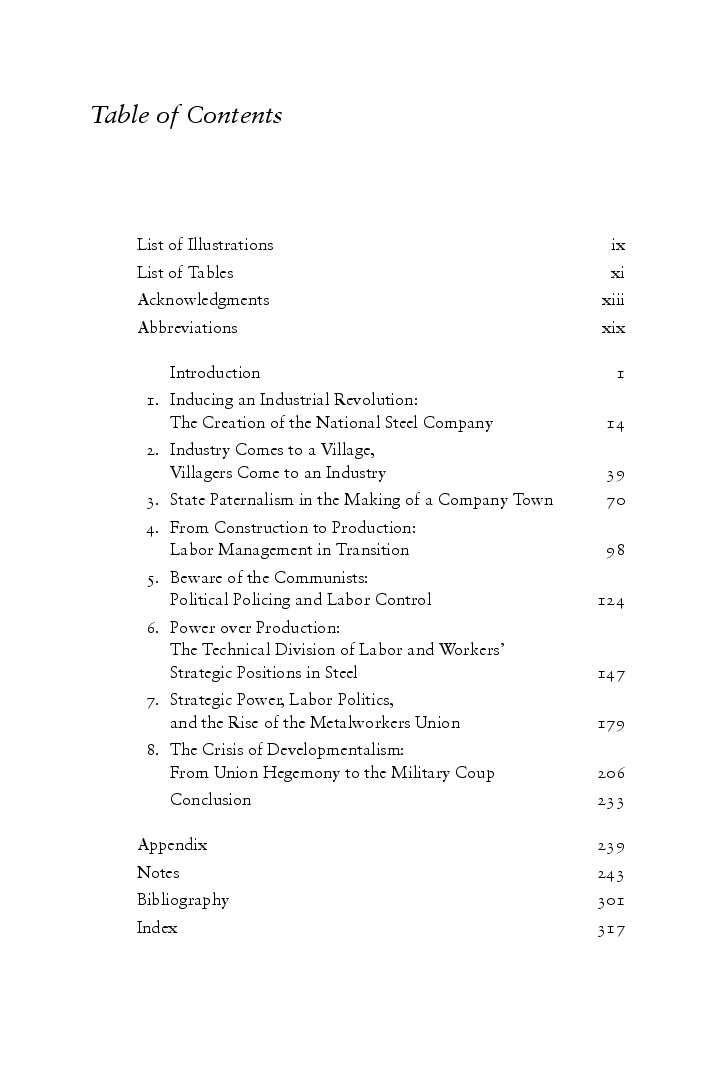 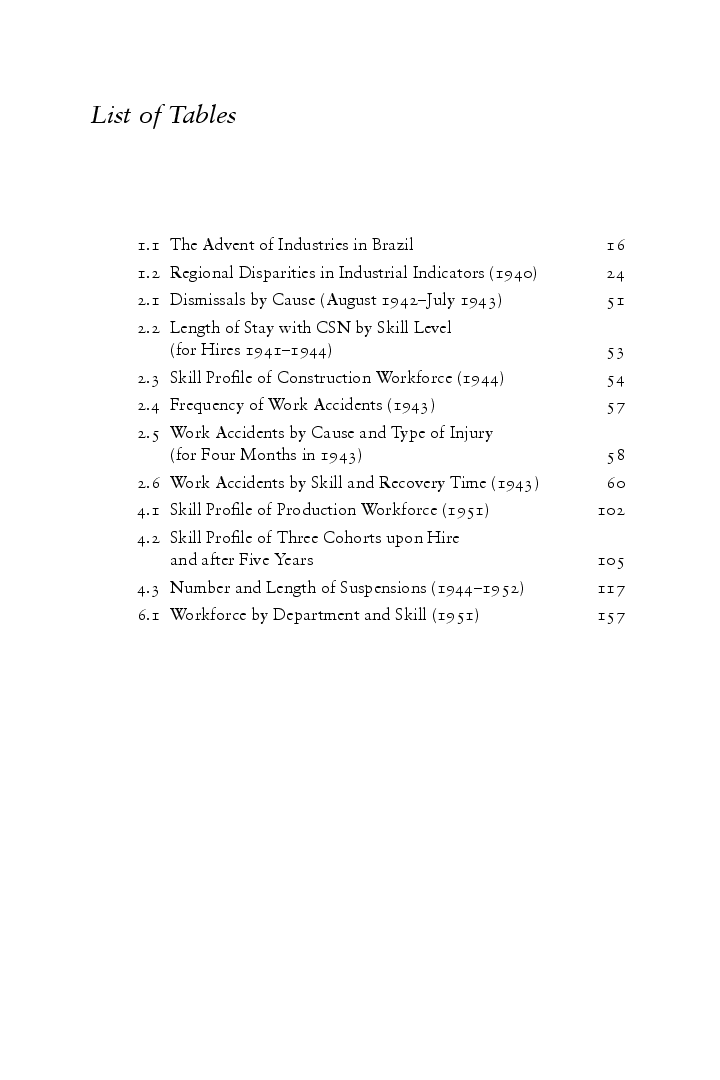