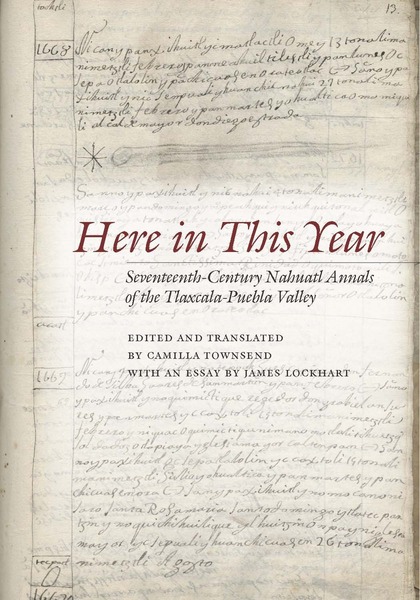 Indigenous breadsellers riot over a Spanish monopoly scheme; Spanish authorities plan to remove native people from the city; indigenous people struggle to construct a splendid church; the city's inhabitants fight over elections and witness hangings, epidemics, and eclipses. All this and more a Native American writer of Puebla, Mexico, reported in the late seventeenth century in a set of annals in his own language, Nahuatl, telling his people's local history from the coming of the Christian faith down to his own day.

These records were part of a corpus of such annals produced in the Tlaxcala-Puebla region during this period. These writings by native peoples for their own posterity provide the most direct access to the indigenous perspective on the postconquest centuries that we are ever going to find.

Here in This Year for the first time brings two sets of Nahuatl annals—the other one being from a more provincial locale—to the English-speaking world, presenting the original Nahuatl with facing, very readable translations.

Camilla Townsend is Professor of History at Rutgers University. She is the author of Malintzin's Choices: An Indian Woman in the Conquest of Mexico (2006) and Pocahontas and the Powhatan Dilemma (2004).

"Here in this Year fully illustrates the fortunate product of scholarly collaboration. It is the first published translation of two Nahuatl annals from Tlaxcala and Puebla . . . Townsend asserts that the texts offer an indigenous voice amidst a complicated post-contact terrain. Revealing the voice through translation, Here in this Year moves us another step closer to penetrating that world."

"Here in This Year presents Nahuatl transcriptions and English translations of two important seventeenth-century annals histories from central Mexico. As a distinctive genre of Nahua writing, the annals are justifiably renowned for being among the richest sources on colonial Mexico's native societies. They provide rare and tantalizing perspectives written by Nahuas on their past. The publication of these two sources is a considerable contribution to the scholarly literature, especially with the excellent essays by Camilla Townsend and James Lockhart . . . In sum, this visually handsome volume deserves a wide audience."

"This work provides readers not only with an indigenous perspective of the social, political, and religious events of the region, but also with a nuanced understanding of the annals genre and the similarities and differences between examples from Tlaxcala and Puebla . . . Townsend's excellent translations appear side by side with the Nahuatl transcriptions and, when coupled with her extensive footnotes, provide full disclosure of the translation process. Those interested in the colonial society of Central Mexico, Nahuatl, and/or the indigenous peoples of colonial Latin America will benefit from this work."

"The transcriptions and translations, displayed with the Nahuatl and English on facing pages, are models of clarity, wonderfully nuanced and rendered in idiomatic English that nonetheless remains remarkably faithful to the originals. Townsend's extensive and detailed annotations lay out her rationale for certain interpretations of the text and ground her translations in specific 'moments in time' . . . Here in This Year sketches an exceptionally rich Central Mexican cultural and linguistic landscape . . . Townsend's study is a fine addition to the growing body of scholarship on the Nahuas of Central Mexico."

"This is a simply a superb book. From the design of its cover to the quality of the introductory essays, the facing-page transcriptions and translations of the Nahuatl documents, and the detailed page footnotes, it represents a model of historical scholarship . . . This volume allows one, as never before, to enter the world of indigenous residents of two key Mexican colonial settlements; it provides a window into their perceptions of important, and by their absence, insignificant events. We are deeply indebted to Camilla Townsend for this superb presentation and analysis of these annals. This is scholarship at its best; hopefully others will follow her example."

"This work is a significant contribution to the growing library of Nahuatl texts that scholars have made available in English translation. As noted, it represents a different type of documentation than has been studied before. The analysis by Townsend and Lockhart gives the reader a glimpse into the people who were active in the period, into the social world that created these works, and into the language they used."

"This seemingly small volume is packed with information and insights about the transformation of a people who sought to retain their identity in the seventeenth century. Townsend's work is recommended to students, linguists, and researchers of early Mexican history."

"Here In This Year is a work of unassailable scholarship, setting the bar for editions of translated Mesoamerican texts to a new height. The fine-grained analytical detail of the introductory essays and footnotes is exemplary—Townsend's Introduction and the translation of the Nahuatl texts is definitive." 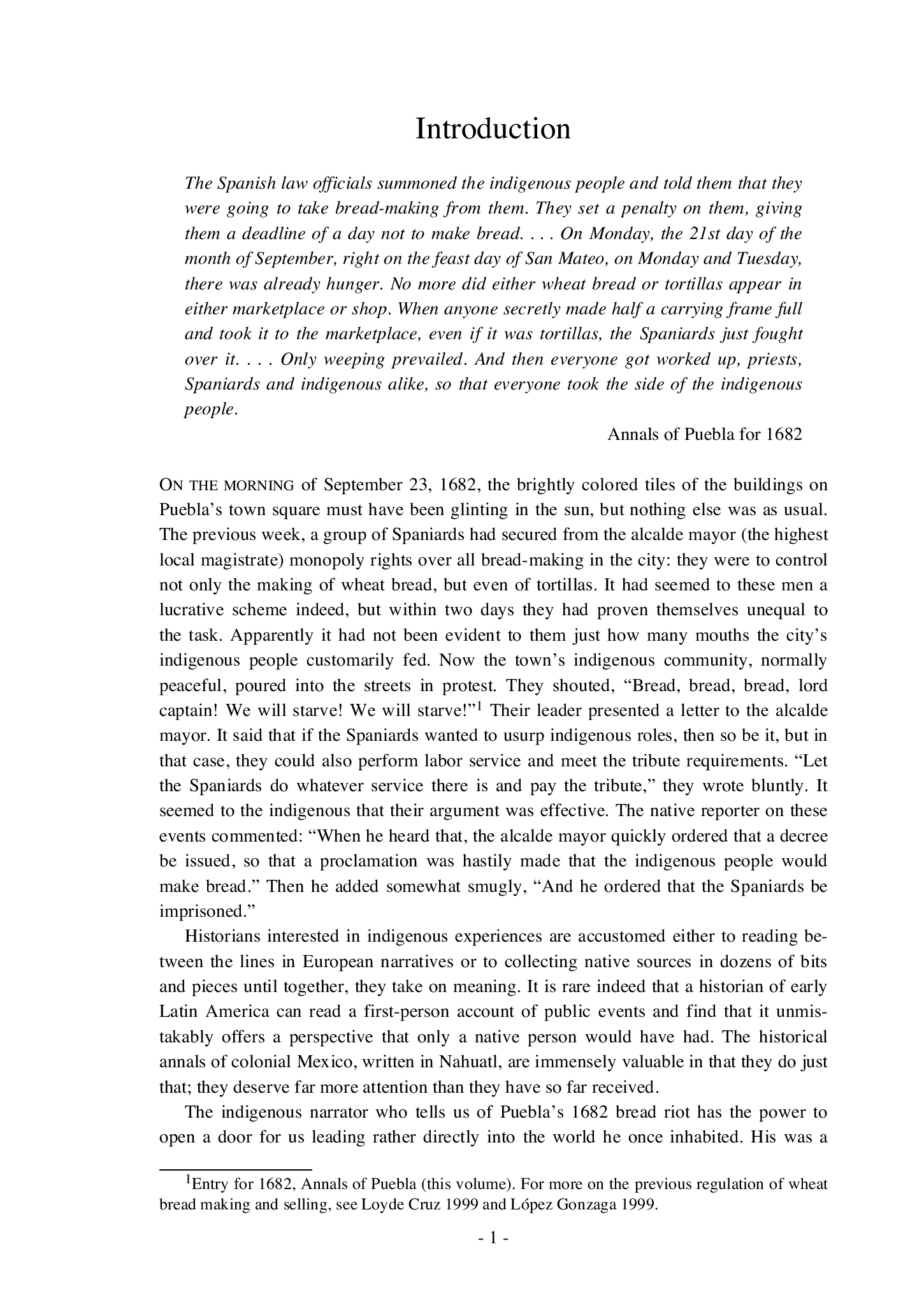 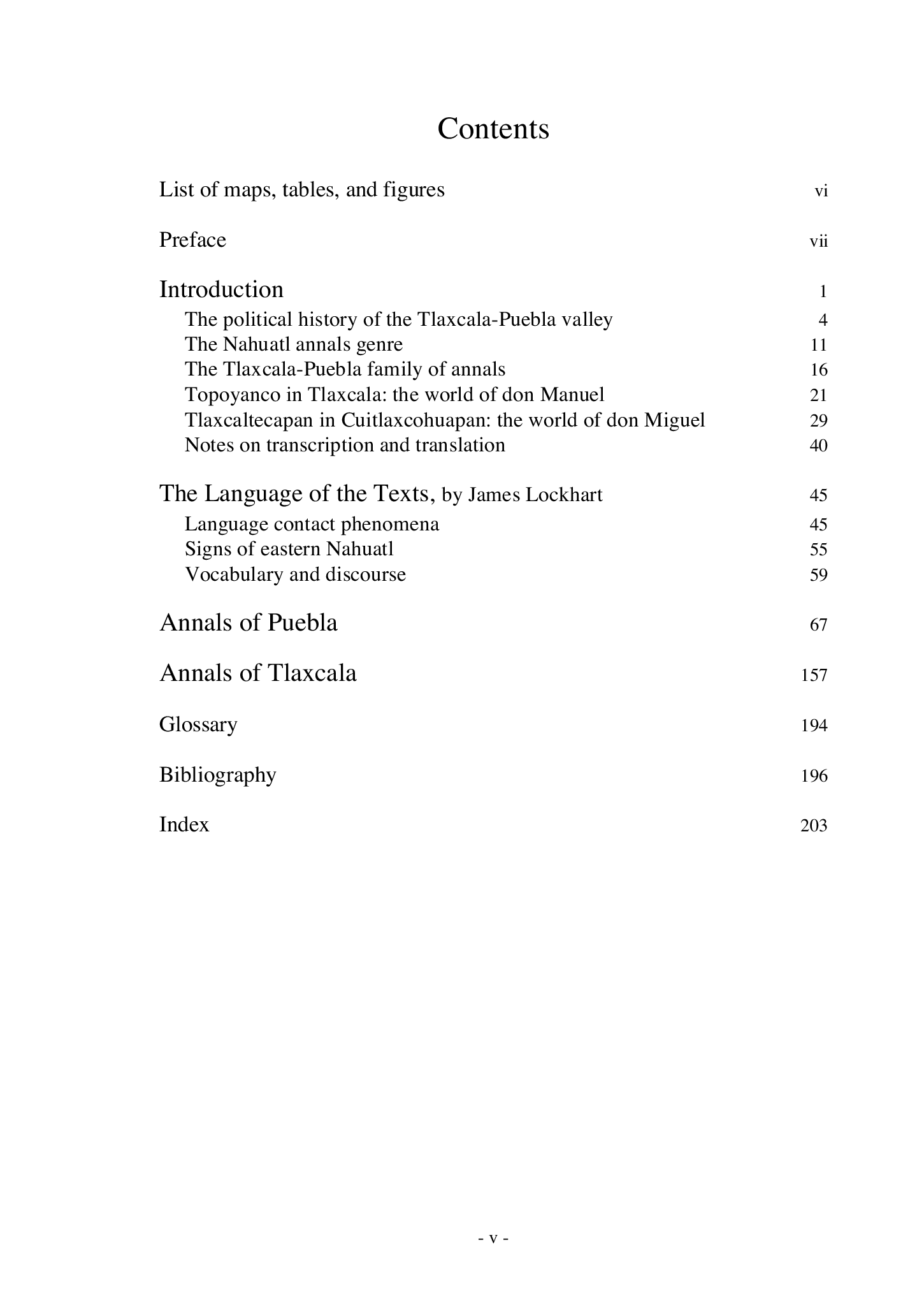