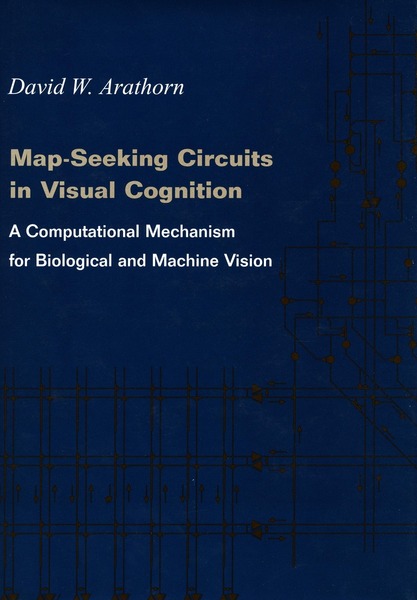 This work presents a bold new theory of the cognitive circuitry of the brain, with emphasis on the functioning of human vision. Departing from conventional precepts in the fields of artificial intelligence, neuroscience, and visual psychophysics, the author has developed a computational theory that provides a unitary explanation for a wide range of visual capabilities and behaviors, most of which have no accepted theoretical explanation. He describes a cortical mechanism termed “map-seeking” and demonstrates its explanatory power in areas as diverse as limb-motion planning and perceptual deficits associated with schizophrenia.

The author argues that map-seeking is a fundamental, broadly applicable computational operation with algorithmic, neuronal, and analog electronic implementations, and that its generality makes it suitable as the core of a computational explanation for several cognitive functions. Variations of this map-seeking circuit perform recognition under visual transformations, tracking, scene segmentation, and determination of shape from view displacement.

The mathematical principle on which map-seeking depends, a superposition ordering property, solves the combinatorial explosion problem that has plagued all other approaches to visual computation. The author demonstrates that map-seeking is capable of realistic performances in neuronal form and in many current technological procedures. Because of its breadth of application, it is a plausible cortical theory. Because it can be implemented electronically, it forms the basis for a computational technology highly suited for visual, and other perceptual, cognitive, and motor applications.

David W. Arathorn is an independent scholar whose principal work has been the design and implementation of large-scale industrial systems.

“What Arathorn has done is brilliant. The question of how the brain forms representations of objects which are invariant to changes in position, size, viewing angle, etc. is a deep and mysterious one, and he has come up with a clever solution based on remapping input patterns using a neural network. It provides the beginnings of a framework for thinking about visual cognition in neural terms, something that is sorely needed in the field.”—Bruno Olshausen, University of California, Davis