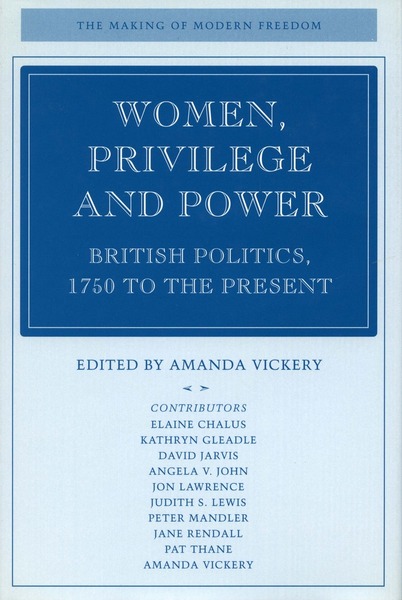 Women, Privilege, and Power
British Politics, 1750 to the Present
Edited by Amanda Vickery
SERIES: The Making of Modern Freedom

This book examines the many different ways in which women achieved public standing and exercised political power in England from the middle of the eighteenth century to the present. It shows how rank, property, and inheritance could confer de facto power on privileged women, and how across the centuries the arrogance of birth and title empowered aristocratic women to overawe enfranchised men of lower social standing.

The essays contribute to an ongoing “rethinking of the political,” a consequence in part of the rediscovery of the work of Jürgen Habermas by political and social historians. For Habermas, the public sphere included print media and voluntary associations, and the contributors stress the extent of female engagement in political culture broadly conceived. However, they extend this definition of the public sphere further still to include the “private” world of family connections and friendship networks, within which political ideas were debated and new social practices played out.

Many of the essays are inspired by a related effort to reintegrate radical female activists within their political milieu. Although feminist hagiography has accustomed us to see female activists as heroic outsiders rising sui generis from a hostile environment, recent research restores them to their intellectual and familial contexts. Finally, the contributors explore the limits and possibilities of women’s citizenship both before and after winning the right to vote. Together, the essays tell a continuous and complex story, redefining political activity and reassessing the turning points of British political history.

Amanda Vickery is Reader in the History of Women at Royal Holloway College, University of London. She is the author of The Gentleman's Daughter: Women's Lives in Georgian England.

"This is an important attempt to extend the history of women beyond conventional and heroic success stories. In place of the progressive march towards suffrage and feminism, the authors invoke a broader and more sophisticated context by examining the meaning of 'politics'. To do that, the authors follow three trends: the relation between power and privilege, the shifting boundaries between public and private spheres, and the meaning of female citizenship."

"[An] excellent edited collection . . . The volume has an impressive thematic, chronological, and theoretical coherence. . . . The Collection makes important contributions not simply to our understanding of British history but to our appreciation of British politics."

"Scholars and students are well served by this carefully researched and well-written work."