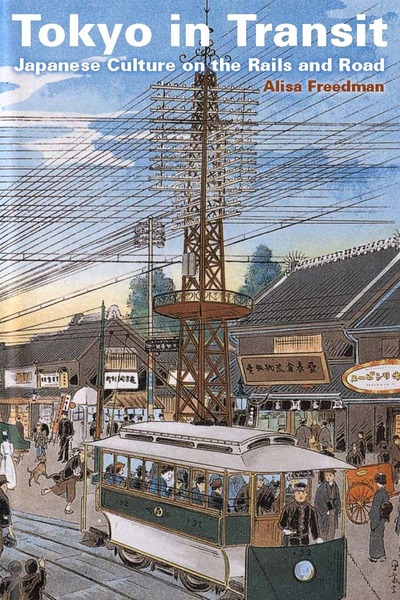 Increased use of mass transportation in the early twentieth century enabled men and women of different social classes to interact in ways they had not before. Using a cultural studies approach that combines historical research and literary analysis, author Alisa Freedman investigates fictional, journalistic, and popular culture depictions of how mass transportation changed prewar Tokyo's social fabric and artistic movements, giving rise to gender roles that have come to characterize modern Japan.

Freedman persuasively argues that, through descriptions of trains and buses, stations, transport workers, and passengers, Japanese authors responded to contradictions in Tokyo's urban modernity and exposed the effects of rapid change on the individual. She shines a light on how prewar transport culture anticipates what is fascinating and frustrating about Tokyo today, providing insight into how people make themselves at home in the city. An approachable and enjoyable book, Tokyo in Transit offers an exciting ride through modern Japanese literature and culture, and includes the first English translation of Kawabata Yasunari's The Corpse Introducer, a 1929 crime novella that presents an important new side of its Nobel Prizewinning author.

Alisa Freedman is Assistant Professor of Japanese Literature and Film at the University of Oregon. She is engaged in several interdisciplinary research projects and literary translations that investigate how the modern urban experience has shaped human subjectivity, cultural production, and gender roles.

"Based on a large amount of historical material, literary works, journalistic and popular cultural depictions, it examines the development of the Tokyo mass transportation system, and more importantly, the social and cultural transformation of Japanese society during the first half of the 20th century. The book not only provides a new methodology and fresh thinking for social science research, but also provides a new perspective on the modernization of Japan with its rapid development of mass transportation, and introduces us to new and vast materials for the study of Japanese history and culture."

"Freedman weaves into her study a history of Tokyo's mass transit system and descriptions of material culture that provide readers a heightened sense of the everyday experience of urban modernity."

"Tokyo in Transit deserves praise for proposing an innovative approach to the history it relates, the writing it illuminates, and the conceptual disciplinary questions about literature and history it raises. The wide range of critical theorists, Japanese scholars, and films brought to bear on the investigation are evidence enough of Freedman's thorough engagement with the subject."

"Freedman has produced an engaging literary ethnography, using the vast writings of the times centered on transportation and its effects on social mores during Tokyo's dizzying jazz age. Commuter rail, department stores, cafes, and dance halls bustle with people on the move, and Freedman captures the excitement of modern life through writers who celebrated (or deplored) the new city."

"This is not a conventional history of Tokyo's trains, but rather, a broad and ambitious exploration of the complexity and dynamism of early twentieth century Japan's modernity through depictions of Tokyo's mass transportation network. Impressive and insightful."

"A significant contribution to Japanese literary studies, Tokyo in Transit offers such a readable, compelling cultural history that anyone who has ever taken a train or waited at a bus stop will find a story here that strikes a chord." 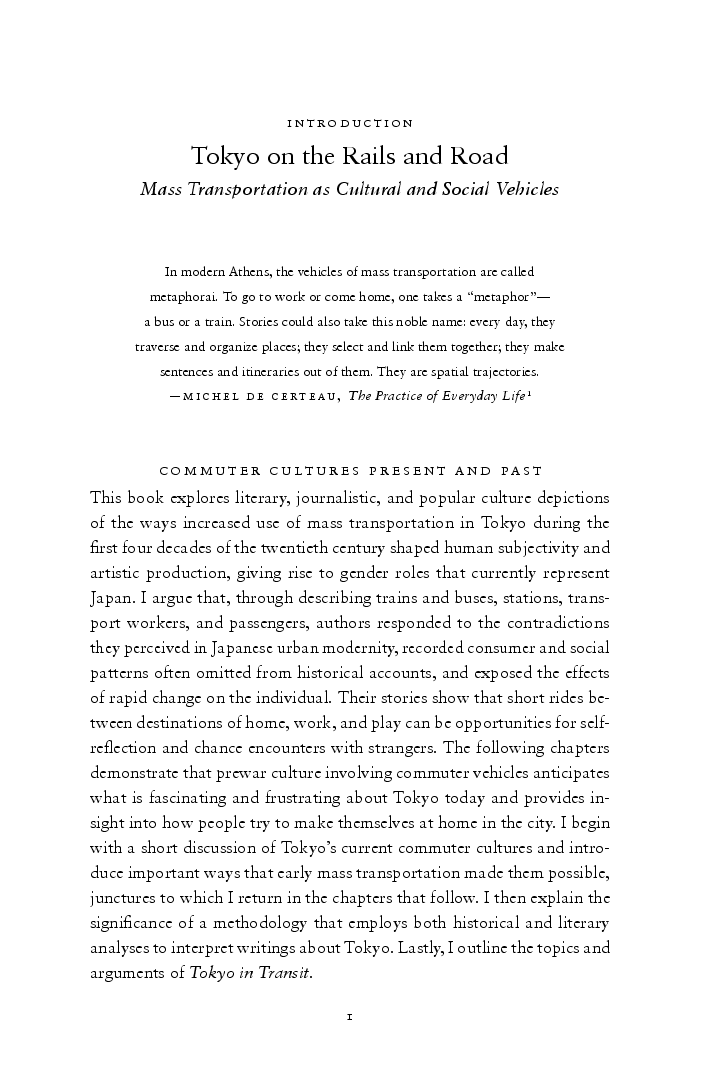 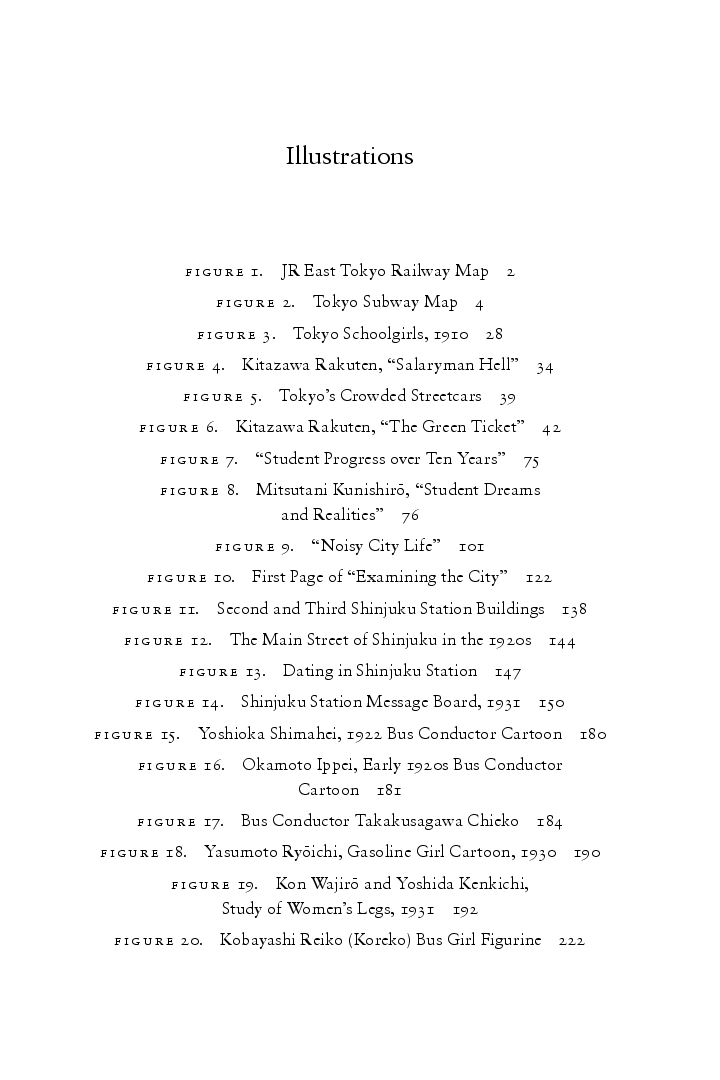 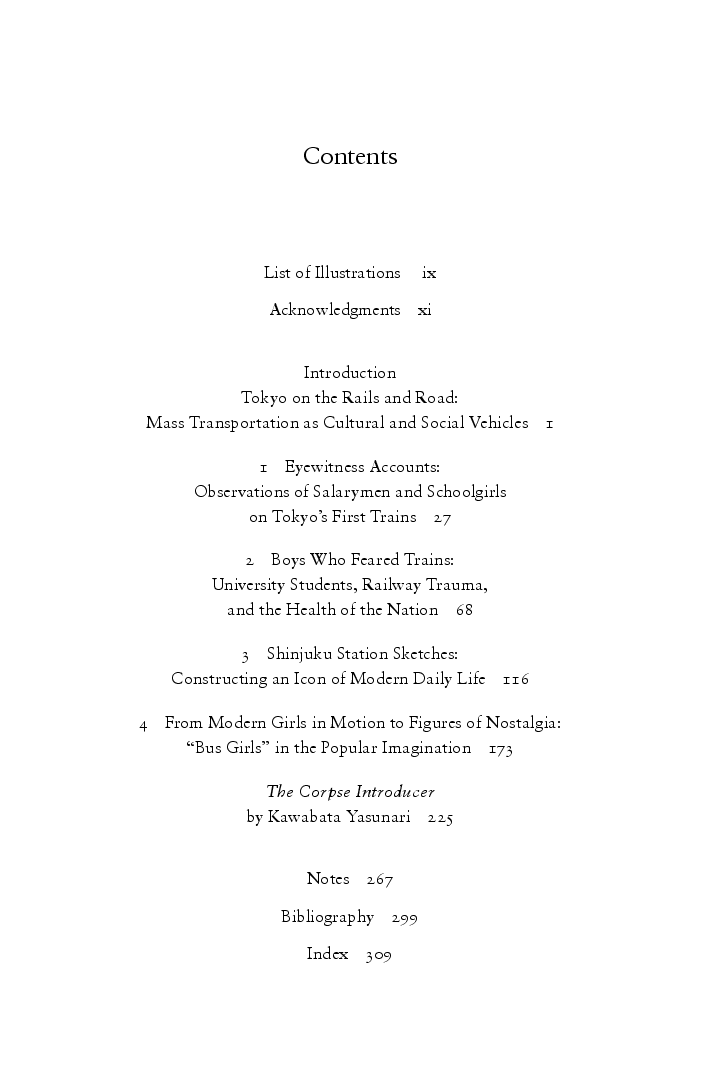