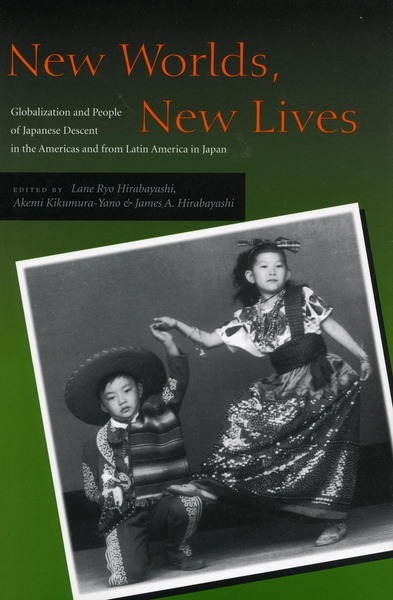 New Worlds, New Lives
Globalization and People of Japanese Descent in the Americas and from Latin America in Japan
Edited by Lane Ryo Hirabayashi, Akemi Kikumura-Yano, and James A. Hirabayashi
SERIES: Asian America

This ambitious work confronts the complex question of who and what is a Nikkei, that is, a person of Japanese descent, by studying their communities in seven countries in the Americas: Argentina, Bolivia, Brazil, Canada, Paraguay, Peru, and the United States. It also considers the special case of the many Latin American Nikkei who have returned to Japan in recent decades to seek employment.

The contributors draw upon a range of disciplines to present a multifaceted portrait of people of Japanese descent in the Americas, the destination of 90 percent of Japanese emigrants. Thus, for example, the reader is able to view the Peruvian Japanese experience through the eyes of an anthropologist, a demographer/historian, and a journalist—all of whom are Peruvians of Japanese descent.

Among the main questions explored in New Worlds, New Lives are: What is the historical background and current status of Nikkei society in a given country? Are there any common attributes the Nikkei share across the Americas, especially in terms of social institutions, the family, the position of women, religion, education, politics, and economics? What are the significant differences between the Nikkei populations in the various countries and why have these differences developed? What are the future prospects of Nikkei communities in the Americas?

Lane Ryo Hirabayashi is Professor of Ethnic Studies and a member of the graduate faculty of the Department of Anthropology at the University of Colorado, Boulder. Akemi Kikumura-Yano is Director of Research and International Relations at the Japanese American National Museum, Los Angeles. James A. Hirabayashi is Chief Program Advisor at the Japanese American National Museum.

"This extremely important book marks a definite'breakthrough' in making a comparative analysis of a single nationality group and its descendants in several new countries. No other book encompasses such a broad, yet very detailed, perspective, and all scholars of Japanese immigrants to the Americas will welcome this new direction in immigration history."

"New Worlds, New Lives does a great job of exploring the complex histories, and changing demographics, of the Japanese diaspora in only 384 pages...The volume is definately worth $24.95."

"Its real strength is its view into the contemporary communities of Nikkei in various host nations, and into Japan as host to its descendants wh have become gaijin."