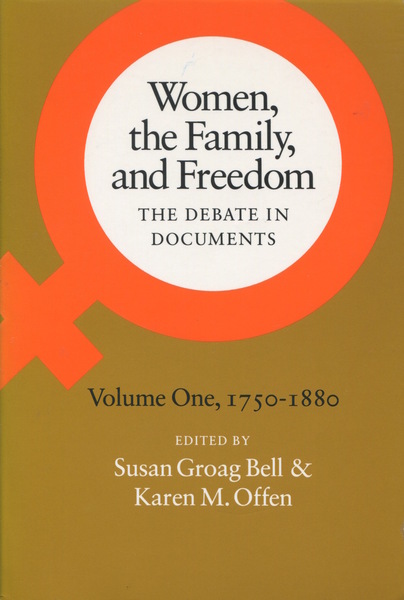 Women, the Family, and Freedom
The Debate in Documents, Volume I, 1750-1880
Edited by Susan Groag Bell and Karen M. Offen

This is the first book in a two-part collection of 264 primary source documents from the Enlightenment to 1950 chronicling the public debate that raged in Europe and America over the role of women in Western society. The present volume looks at the period from 1750 to 1880. The central issues—motherhood, women's legal position in the family, equality of the sexes, the effect on social stability of women's education and labor—extended to women the struggle by men for personal and political liberty.

These issues were political, economic, and religious dynamite. They exploded in debates of philosophers, political theorists, scientists, novelists, and religious and political leaders. This collection emphasizes the debate by juxtaposing prevailing and dissenting points of view at given historical moments (e.g. Madame de Staël vs. Rousseau, Eleanor Marx vs. Pope Leo XIII, Strindberg vs. Ibsen, Simone de Beauvoir vs. Margaret Mead). Each section is preceded by a contextual headnote pinpointing the documents significance. Many of the documents have been translated into English for the first time.