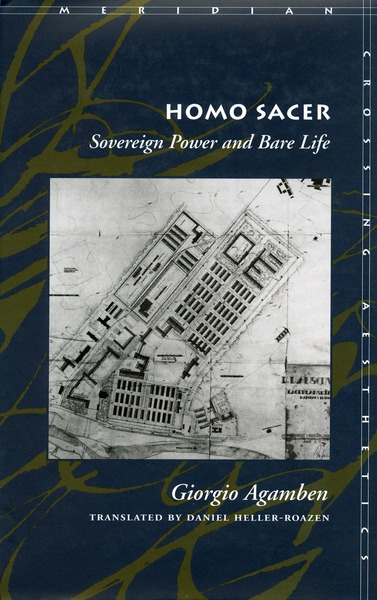 The work of Giorgio Agamben, one of Italy's most important and original philosophers, has been based on an uncommon erudition in classical traditions of philosophy and rhetoric, the grammarians of late antiquity, Christian theology, and modern philosophy. Recently, Agamben has begun to direct his thinking to the constitution of the social and to some concrete, ethico-political conclusions concerning the state of society today, and the place of the individual within it.

In Homo Sacer, Agamben aims to connect the problem of pure possibility, potentiality, and power with the problem of political and social ethics in a context where the latter has lost its previous religious, metaphysical, and cultural grounding. Taking his cue from Foucault's fragmentary analysis of biopolitics, Agamben probes with great breadth, intensity, and acuteness the covert or implicit presence of an idea of biopolitics in the history of traditional political theory. He argues that from the earliest treatises of political theory, notably in Aristotle's notion of man as a political animal, and throughout the history of Western thinking about sovereignty (whether of the king or the state), a notion of sovereignty as power over "life" is implicit.

The reason it remains merely implicit has to do, according to Agamben, with the way the sacred, or the idea of sacrality, becomes indissociable from the idea of sovereignty. Drawing upon Carl Schmitt's idea of the sovereign's status as the exception to the rules he safeguards, and on anthropological research that reveals the close interlinking of the sacred and the taboo, Agamben defines the sacred person as one who can be killed and yet not sacrificed—a paradox he sees as operative in the status of the modern individual living in a system that exerts control over the collective "naked life" of all individuals.

Giorgio Agamben teaches philosophy at the University of Venice.

—The Review of Politics

"The story of homo sacer is certainly worth reading because of its suggestiveness and provocations."