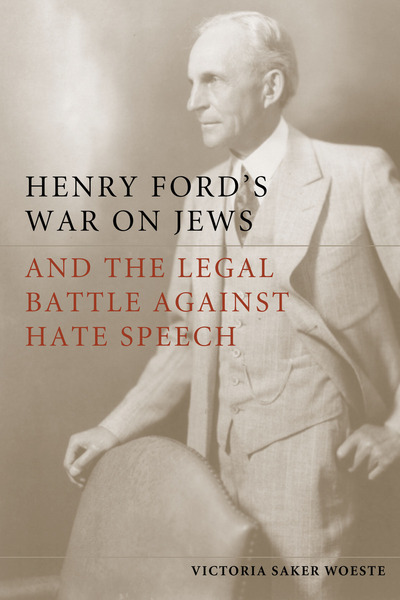 Henry Ford is remembered in American lore as the ultimate entrepreneur—the man who invented assembly-line manufacturing and made automobiles affordable. Largely forgotten is his side career as a publisher of antisemitic propaganda. This is the story of Ford's ownership of the Dearborn Independent, his involvement in the defamatory articles it ran, and the two Jewish lawyers, Aaron Sapiro and Louis Marshall, who each tried to stop Ford's war.

In 1927, the case of Sapiro v. Ford transfixed the nation. In order to end the embarrassing litigation, Ford apologized for the one thing he would never have lost on in court: the offense of hate speech.

Using never-before-discovered evidence from archives and private family collections, this study reveals the depth of Ford's involvement in every aspect of this case and explains why Jewish civil rights lawyers and religious leaders were deeply divided over how to handle Ford.

Victoria Saker Woeste is Research Professor at the American Bar Foundation in Chicago and has had teaching appointments at Indiana University-Indianapolis, Northwestern University, and Amherst College. Her first book was awarded the Law and Society Association's J. Willard Hurst Prize.

"Woeste [delivers an] in-depth [analysis] rich with ethnographic and historical detail . . . [O]ne discovers a [theme], that fostering meaningful equality in diverse communities can only be done where law is not willfully color-blind . . . [Woeste provides] the sort of nuanced and substantive discussions of diversity that [is] sorely needed in public discourse today."

"Victoria Woeste has written a brilliantly detailed account of the responses to Ford's 'War on Jews,' focusing on two leading American Jewish lawyers: Louis Marshall and Aaron Sapiro . . . One of the signal virtues of this fine book, then, is that it provides readers with ample, rich, and fascinating evidence on which to form their own views about its provocative arguments and conclusions."

"[Henry Ford's War on Jews and the Legal Battle Against Hate Speech] is an exciting, elegantly written, and meticulously researched book."

"Thoroughly researched and ably written, Henry Ford's War on Jews traces [Aaron] Sapiro's valiant attempt to defend not only his good name but that of the Jewish people."

"The book is useful for the historian, students of law, and students of American Jewish history."

"Drawing on new evidence from archives and private family collections, this study details the depth of Ford's involvement in every aspect of this case and explains why Jewish civil rights lawyers and religious leaders were deeply divided over how to handle Ford."

"Victoria Saker Woeste's Henry Ford's War on Jews and the Legal Battle Against Hate Speech contributes significantly to our understanding of the dramatic libel lawsuit brought by Aaron Sapiro against the American automotive pioneer. Woeste's meticulously researched book thoughtfully examines the complex circumstances and personalities behind the case, the intricacies of the trial, and the implications of its resolution . . . Woeste's book offers a fascinating and rewarding account of Sapiro v. Ford, and what the case teaches us about hate speech, libel law, and the anti-Jewish crusade of an American icon."

"Thoroughly researched and footnoted, the book analyzes Sapiro v Ford and its aftermath in the larger social context of combating hate speech. This ambitious scope is paried with lively writing to produce an impressive history for Michigan readers."

"Victoria Saker Woeste's Henry Ford's War on Jews and the Legal Battle Against Hate Speech provides great insight into Ford's relationship with Jews through the lens of a dramatic court case . . . Woeste does an excellent job of capturing the many and varied nuances of the reactions from American Jews as well as the public at-large and the Ford machine . . . This is a thoroughly researched and well-written investigation. Woeste mined the archives and uncovered evidence that prior biographers had not found. It is recommended for serious readers interested in Henry Ford and in the political and social developments of the American Jewish community."

"At the heart of this fine study are the efforts to silence Henry Ford's virulent anti-Semitism . . . Recommended."

"It is not often that I read a book that is as important, well-researched, and well-written as Henry Ford's War. This volume, based upon primary sources that have for the most part never been examined before, brilliantly recreates the legal struggle against Ford's Dearborn Independent and underscores its larger significance. Anyone interested in Henry Ford, in antisemitism, or in legal battles against hate speech will want to read this book."

"Victoria Saker Woeste gives us great courtroom drama and captures an important historical moment. This will be the definitive work on Henry Ford and his confrontation by American Jews. Woeste not only presents and explains what was at stake on the basis of significant new evidence, she brings to her analysis the legal expertise to exploit a whole body of secondary literature that most historians are simply unable to evaluate." 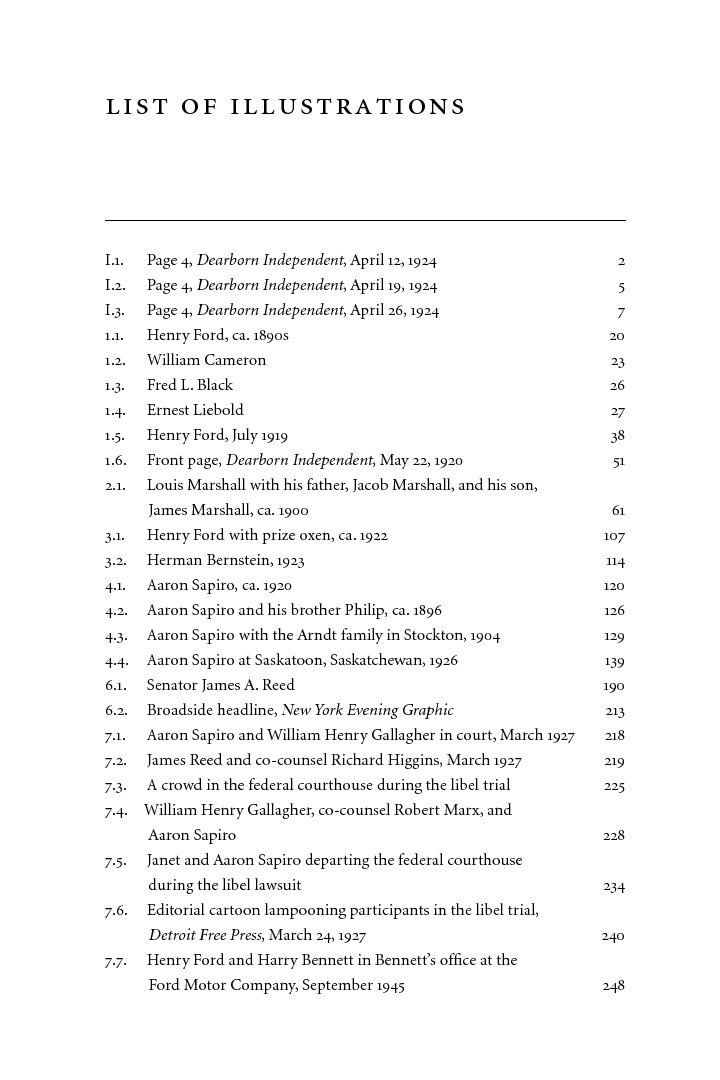 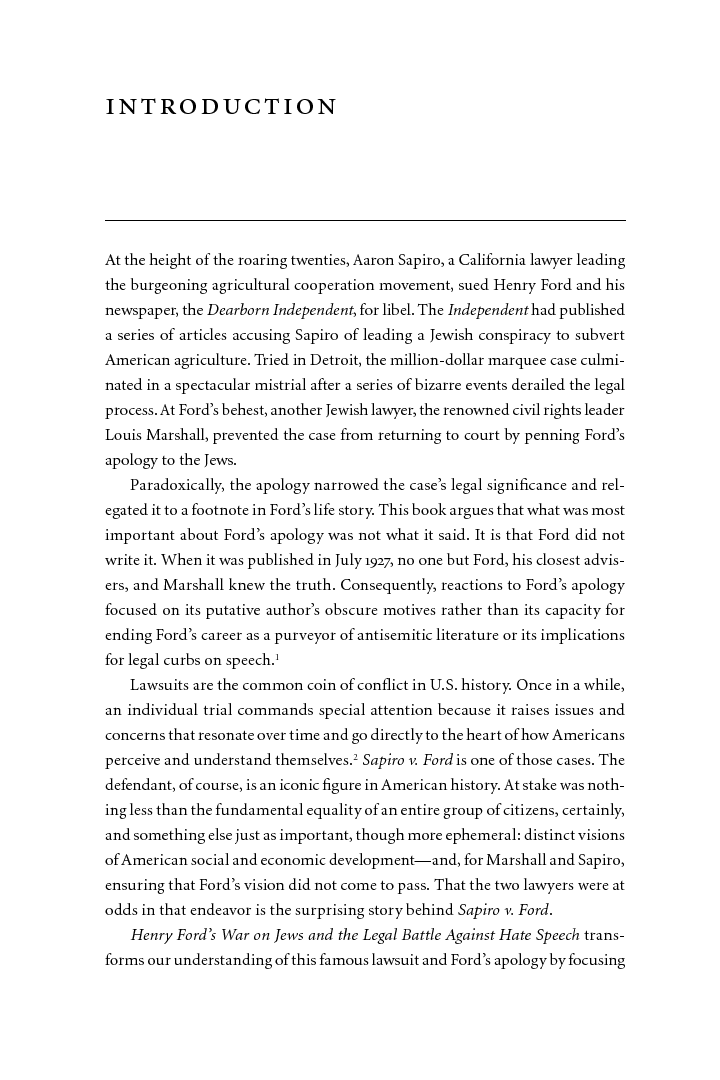 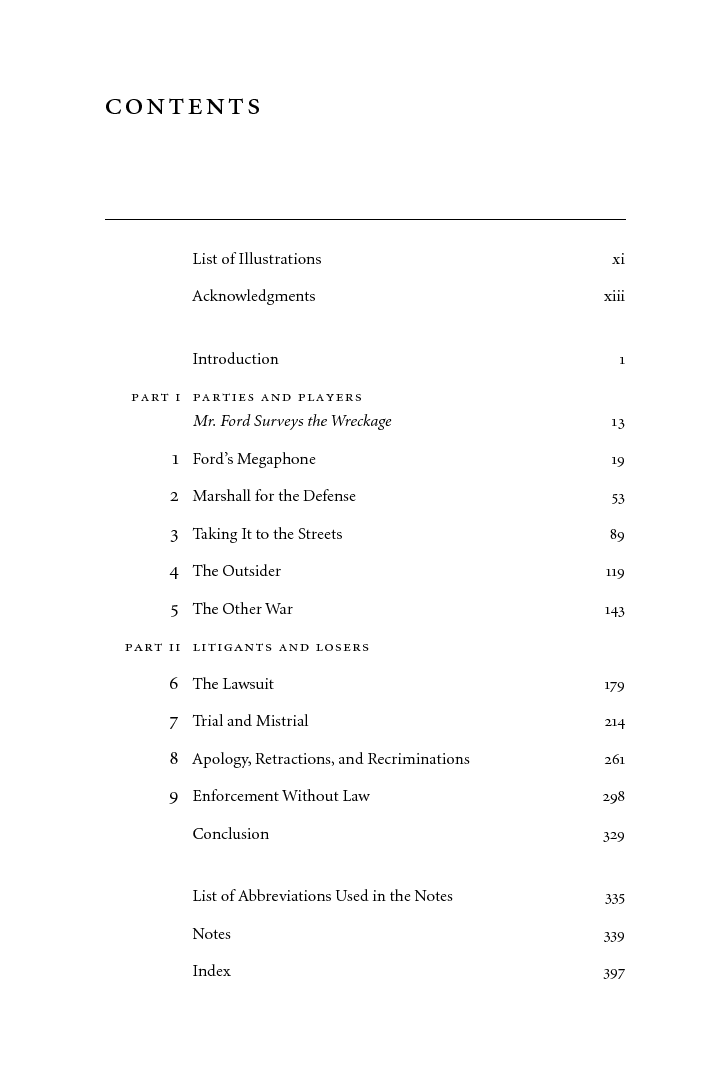