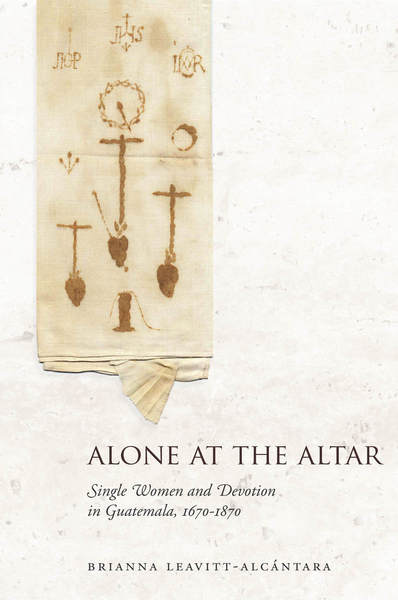 Alone at the Altar
Single Women and Devotion in Guatemala, 1670-1870
Brianna Leavitt-Alcántara

By 1700, Guatemala's capital was a mixed-race "city of women." As in many other cities across colonial Spanish America, labor and migration patterns in Guatemala produced an urban female majority and high numbers of single women, widows, and female household heads. In this history of religious and spiritual life in the Guatemalan capital, Brianna Leavitt-Alcántara focuses on the sizeable population of ordinary, non-elite women living outside of both marriage and convent. Although officials often expressed outright hostility towards poor unmarried women, many of these women managed to position themselves at the forefront of religious life in the city.

Through an analysis of over 500 wills, hagiographies, religious chronicles, and ecclesiastical records, Alone at the Altar examines how laboring women forged complex alliances with Catholic priests and missionaries and how those alliances significantly shaped local religion, the spiritual economy, and late colonial reform efforts. It considers the local circumstances and global Catholic missionary movements that fueled official collaboration with poor single women and support for diverse models of feminine piety. Extending its analysis past Guatemalan Independence to 1870, this book also illuminates how women's alliances with the Catholic Church became politicized in the Independence era and influenced the rise of popular conservatism in Guatemala.

Brianna Leavitt-Alcántara is Assistant Professor of History at the University of Cincinnati.

"This is a highly innovative study with important and often unexpected findings. Leavitt-Alcántara constructs a sophisticated analysis of the religiosity and church affiliations of urban Guatemalan laywomen living outside institutional settings."

—Catherine Komisaruk, The University of Texas at San Antonio

"Leavitt-Alcántara uncovers a fascinating chapter of history: the groundswell of non-elite Guatemalan women who shaped local religious institutions and beliefs over the course of three centuries. This intriguing and impeccably researched book offers a highly readable narrative of difficult archival and primary sources for historians of Latin America."

"Brianna Leavitt-Alcántara's meticulous and expansive study is a welcome contribution to the field. Its focus on religion aptly encompasses many related spheres of women's lives, and the generous temporal framing, spanning two centuries, offers a satisfying canvas with both continuities and changes."

"In this very interesting study, Brianna Leavitt-Alcántara takes us to the periphery of the Spanish empire to analyze the devotional activities of single women....Alone at the Altar makes a strong contribution to women's history. Leavitt-Alcántara has painstakingly combed the archives to not only find women whose experiences have otherwise been hidden, but to centre them in both the colonial and the early national past."

"In this fine-grained study of nonelite women's lives and contributions to the Catholic Church in Guatemala from the late seventeenth to the nineteenth century, Brianna Leavitt-Alcántara demonstrates the interpretative potential and problems of historical analysis."––David Carey Jr., Hispanic American Historical Review

"Leavitt-Alcántara's book represents not only a significant contribution to Guatemalan history and the history of women in Latin America, but an invitation for future scholarship to address the overlapping spheres of the former New Spain."