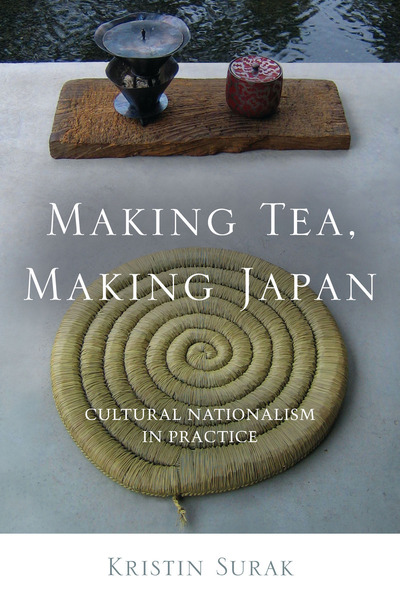 Winner of the 2014 Book of the Year Award, sponsored by the ASA Section on Asia and Asian America.

The tea ceremony persists as one of the most evocative symbols of Japan. Originally a pastime of elite warriors in premodern society, it was later recast as an emblem of the modern Japanese state, only to be transformed again into its current incarnation, largely the hobby of middle-class housewives. How does the cultural practice of a few come to represent a nation as a whole?

Although few non-Japanese scholars have peered behind the walls of a tea room, sociologist Kristin Surak came to know the inner workings of the tea world over the course of ten years of tea training. Here she offers the first comprehensive analysis of the practice that includes new material on its historical changes, a detailed excavation of its institutional organization, and a careful examination of what she terms "nation-work"—the labor that connects the national meanings of a cultural practice and the actual experience and enactment of it. She concludes by placing tea ceremony in comparative perspective, drawing on other expressions of nation-work, such as gymnastics and music, in Europe and Asia.

Taking readers on a rare journey into the elusive world of tea ceremony, Surak offers an insightful account of the fundamental processes of modernity—the work of making nations.

Kristin Surak is a Senior Lecturer (Associate Professor) of Japanese Politics at SOAS, University of London. Her work has been published in the European Journal of Sociology, International Migration Review, Ethnic and Racial Studies, and the New Left Review.

"Surak's Making Tea, Making Japan is one of the most astute studies of the ceremony to appear in decades. Beyond tea aficionados, Surak's book should be read by scholars and students of culture and nationalism because Surak's main contribution is showing how these two fields of embodied culture and nationalism are so deeply intermeshed in the practice of tea."

"The author gives a wealth of detail on the tea ceremony itself . . . Tea captures the essence of Japanese-ness as well as the virtue of the East Asian mentality. Surak writes in a compelling way about how Japanese intellectuals used tea to emblemize Japan's role as the last repository of East Asian culture, which was at risk of falling prey to the 'White Disaster' . . . [Making Tea, Making the State] offers a useful account of how tea culture permeates Japanese history and contemporary society."

"Kristin Surak's elegantly written analysis of the tea ceremony is an excellent addition to the literature on cultural nationalism . . . [T]his book is a meticulous study of tea. Surak resists the temptation of falling into clichés and offers a vibrant analysis of the practice through historical reconstruction, institutional analysis, ethnographic inquiry, and phenomenological description . . . Surak's study is theoretically innovative and essential for sociologists and anthropologists."

"A regrettable schizophrenia characterizes the study of nationalism, with macro and micro analysts rarely engaging rival views. Hence, Kristin Surak's book is a theoretical breakthrough, showing the changing functions and social bearers of a single ritual over a long and troubled historical record. Elegantly written and extraordinarily argued."

"Kristin Surak's fine study unpacks the social and historical context of tea and its ceremonial preparation as a highly illustrative case in point of nationalized cultural production and representation. Deftly crossing disciplinary boundaries between anthropology, sociology, and history, Making Tea, Making Japan is a well-crafted and interpretively provocative book that anyone with an interest in Japanese society and the theoretical dynamics of nationalism will find fascinating . . . [B]eautifully written and lucidly argued, the book offers much of value for scholars and students of modern Japan and the cultural manifestations of national identity there and in other parts of the world."

"If you were ever curious about just what makes the tea ceremony such a Japanese thing, then Kristin Surak's book, Making Tea, Making Japan, should answer your questions from all possible angles. . . Surak's passion and love for the topic emanate from the pages. . . This is not a simple guidebook to enchant novices and teach them the basic steps to get started in the Japanese ritual of 'tea'. Surak's comprehensive research will take those interested deep into the practice's background and allow them to see the tea ceremony as a window into the soul of Japanese national identity. "

"Surak's greatest strength is her awareness of the factors that inform the tea ceremony's central place in Japanese society, from commercial structures allowing the seamless delivery of the objects and architecture of tea anywhere on the globe, to the casual use of history—not always accurate—deployed in a Sunday lesson. . . Surak's book offers a scholarly story of choreography and commercialization and will find its way into future dissertations and onto the shelves of school libraries."

"Making tea for a guest in Japan is a highly encultured act, demanding much more than a pour of hot water over powdered tea. Kristin Surak has plumbed the depths of the practice and demonstrated the enduring meanings of tea for Japanese performers of the craft."

"Kristin Surak's richly contextualized study shows in vivid detail how and why tea came to be, and remains, such a strong carrier of nation in Japan, at once performance and product. Sociologists in particular will not want to miss the fine ethnographic investigation of the tea ceremony in contemporary Japan."

"Surak's careful ethnography and clear theoretical analysis demonstrate the historical role of the tea ceremony in constructing and defining the nation, but she also shows how it is an important part of the slightly different work of maintaining and explicating Japanese-ness. Through careful ethnographic details she shows how the tea ceremony is embodied in ways both gendered and historically contingent; how it is used to distinguish Japanese from other Asians, Asia from the West, 'good' Japanese from others who are less good; and how it is carried not only in performative bodies but in places/spaces. This often fascinating and lively study of chanoyu draws the reader through these various, and intertwined, processes over Japan's recent historical past, unpacking a rich trove of material artefacts, rituals, and texts."

"Kristin Surak's excellent work, Making Tea, Making Japan, provides an eye-opening survey of the history and practice of chanoyu that reveals the tea world's institutional frameworks and patterns of authority, physical and material aspects of its training and practice, and its representation to general audiences." 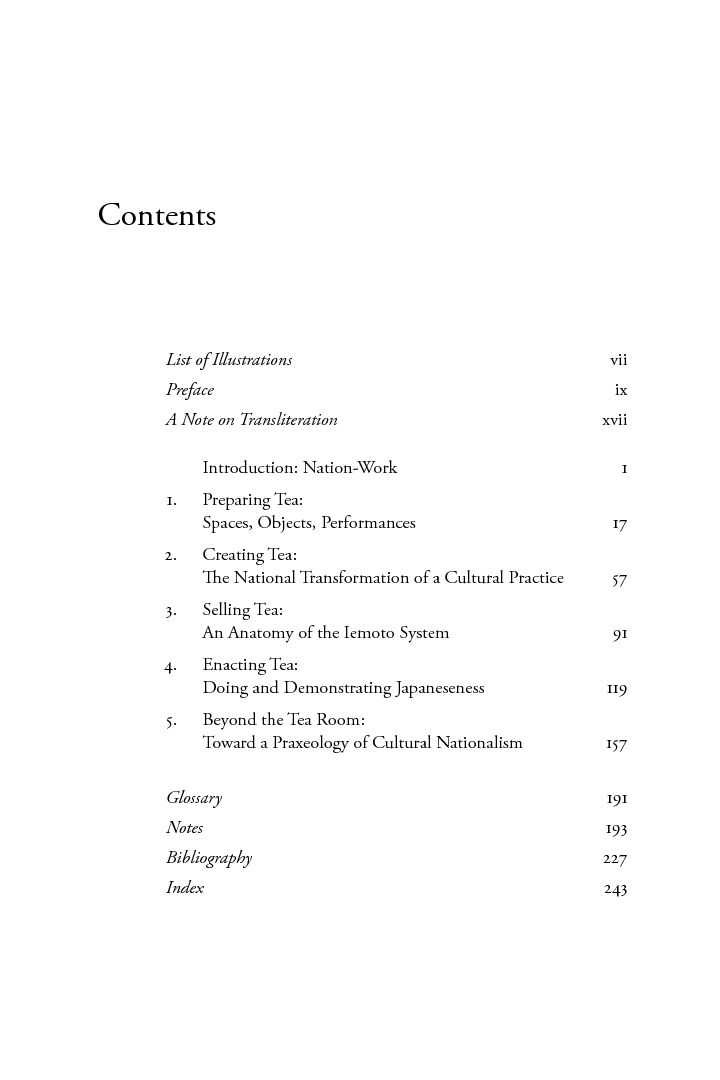 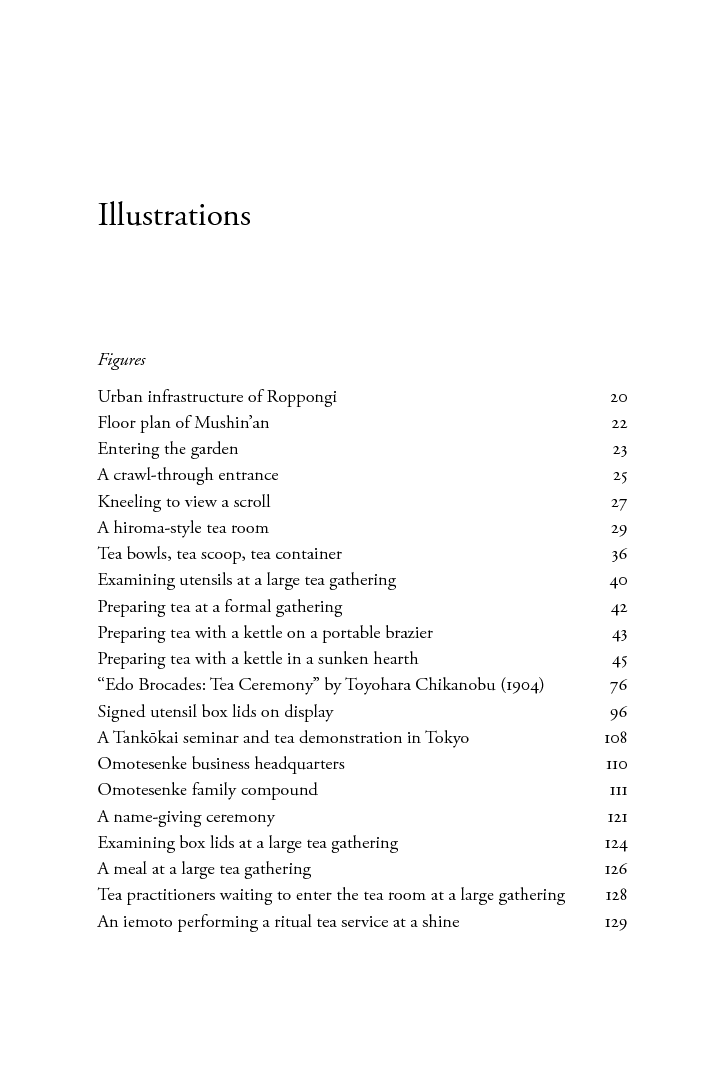 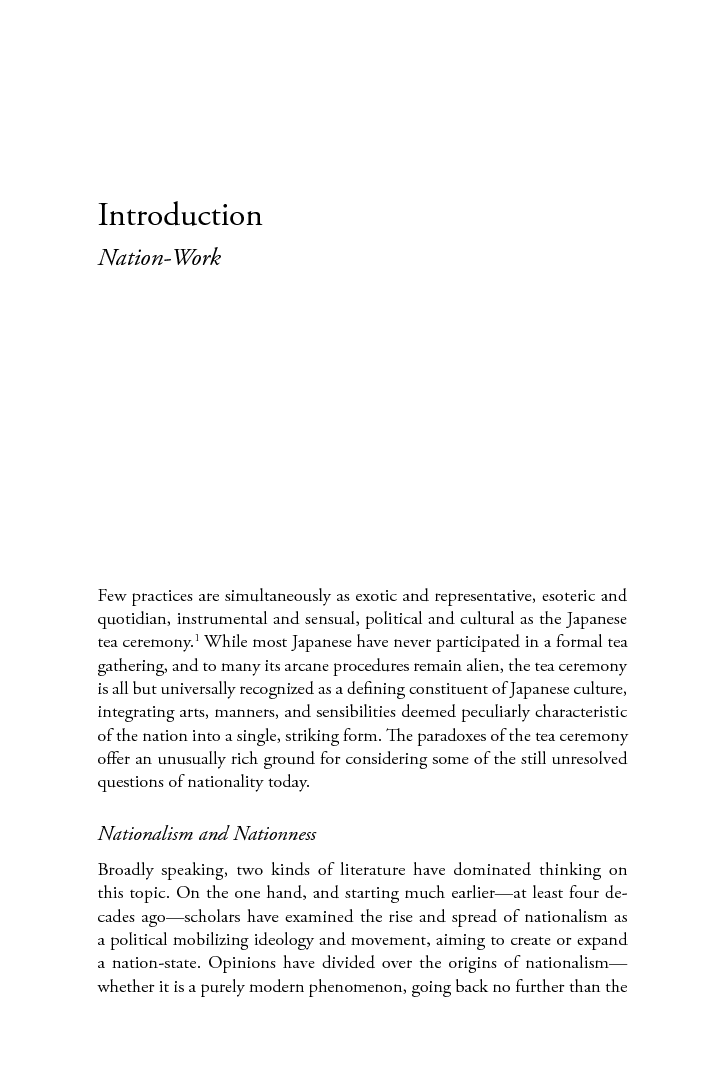 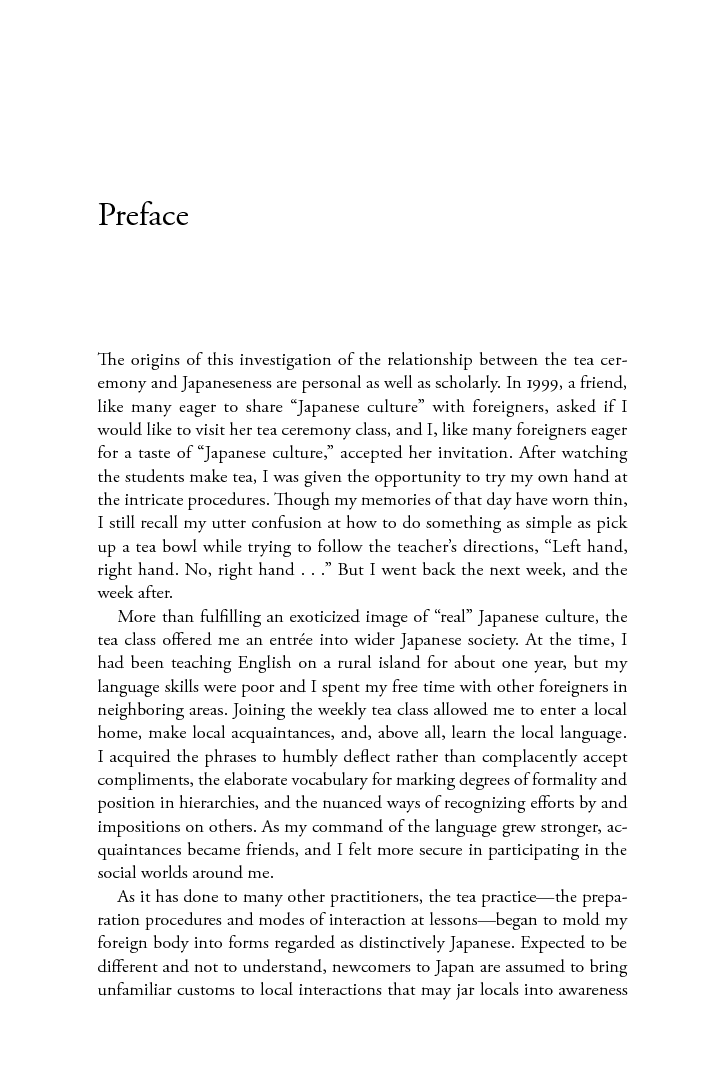