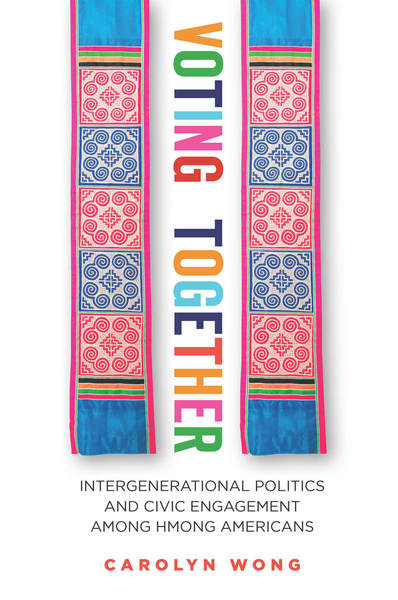 Hmong American immigrants first came to the United States as refugees of the Vietnam War. Forty years on, they have made a notable impact in American political life. They have voter participation rates higher than most other Asian American ethnic groups, and they have won seats in local and state legislative bodies. Yet the average level of education among Hmong Americans still lags behind that of the general U.S. population and high rates of poverty persist in their community, highlighting a curious disparity across the typical benchmarks of immigrant incorporation.

Carolyn Wong analyzes how the Hmong came to pursue politics as a key path to advancement and inclusion in the United States. Drawing on interviews with community leaders, refugees, and the second-generation children of immigrants, Wong shows that intergenerational mechanisms of social voting underlie the political participation of Hmong Americans. Younger Hmong Americans engage older community residents in grassroots elections and conversation about public affairs. And in turn, within families and communities, elders often transmit stories that draw connections between ancient Hmong aspirations for freedom and contemporary American egalitarian projects.

Carolyn Wong is a Research Associate at the Institute for Asian American Studies at the University of Massachusetts, Boston and the author of Lobbying for Inclusion: Rights Politics and the Making of Immigration Policy (Stanford, 2006).

"This book is an important contribution to scholarship in Asian American studies and immigrant politics. To date, there has been no in-depth study of the civic engagement of Hmong Americans. This is a notable gap, given that this group has defied expectations of low participation among groups with low socioeconomic resources. Voting Together skillfully shows how Hmong Americans have beaten the odds, drawing critical attention to factors like geographic context, clan structures, gender, and intergenerational dynamics. The book also provides valuable insights to better understand the future trajectory of this important, yet often overlooked, group."

"This is a pioneering work that provides coast-to-coast coverage of the political engagements of 1.5 generation Hmong Americans. Wong legitimates young Hmong trailblazers by placing these newly elected individuals into the context of American history while also highlighting their role as emerging transnational leaders who affect global changes by demanding human and citizenship rights for their fellow co-ethnics in Southeast Asia. This highly readable book is an excellent addition to the field of Hmong studies."

"In this lively and illuminating account of Hmong American participation in political life, Carolyn Wong provides a deeper understanding of the interplay between newcomers and the political system. Drawing on interviews of community leaders and everyday people situated in different parts of the country, Voting Together forces readers to reconsider traditional theories of community empowerment and identity formation. This theoretically rich and nuanced account of diversity in America is a must-read for those interested in ethnic politics."