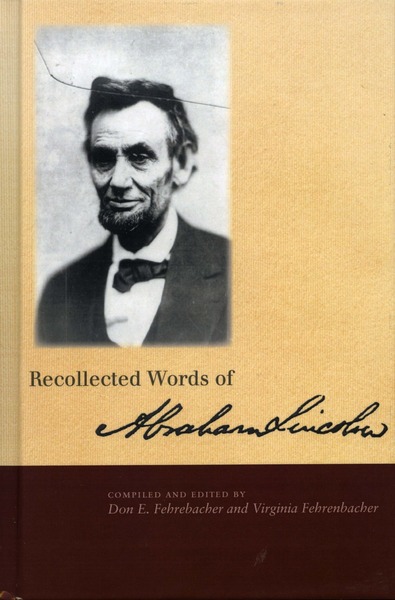 This is the first comprehensive collection of remarks attributed to Abraham Lincoln by his contemporaries. Much of what is known or believed about the man comes from such utterances, which have been an important part of Lincoln biography. About his mother, for instance, he never wrote anything beyond supplying a few routine facts, but he can be quoted as stating orally that she was the illegitimate daughter of a Virginia aristocrat. Similarly, there is no mention of Ann Rutledge in any of his writings, but he can be quoted as saying when he was president-elect, “I did honestly and truly love the girl and think often, often of her now.”

Did Lincoln make a conditional offer to evacuate Fort Sumter in April 1861? Did he personally make the decision to restore General McClellan to army command in September 1862? To whom did he first reveal his intention to issue an emancipation proclamation? Did he label the Gettysburg address a failure right after delivering it? Did he, just a few days before his assassination, dream of a president lying dead in the White House? All of these questions, and many others, arise from recollective quotations of Lincoln, and the answer in each instance depends upon how one appraises the reliability of such recollection.

Don E. Fehrenbacher is William Robertson Coe Professor of History and American Studies Emeritus at Stanford University. Among his many Lincoln publications is a two-volume edition of Abraham Lincoln: Speeches and Writings for the Library of America. Virginia Fehrenbacher is a retired public school teacher.

"The Fehrenbachers have sifted through countless recollective writings in order to document, classify, and evaluate some 1,900 quotations of Lincoln by more than 500 people. This awesome task was well worth the effort, for we now have a comprehensive and trustworthy guide of incalculable value to all students of Lincoln."

"From its elegantly written and sensibly reasoned introduction to its rich trove of recollected remarks of Lincoln, this is the most important archival work on Lincoln since the publication of the Collected Works of Abraham Lincoln some forty years ago."