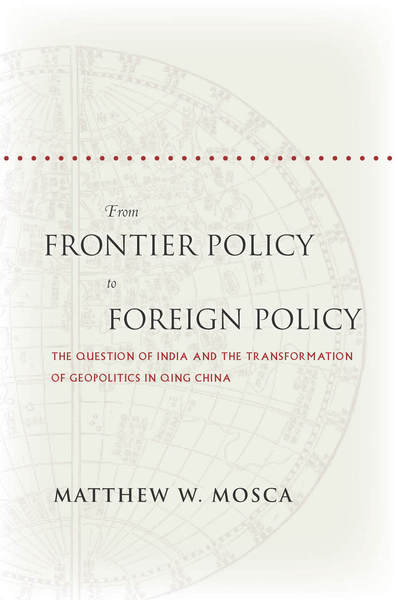 From Frontier Policy to Foreign Policy
The Question of India and the Transformation of Geopolitics in Qing China
Matthew W. Mosca

Between the mid-eighteenth and mid-nineteenth centuries, Qing rulers, officials, and scholars fused diverse, fragmented perceptions of foreign territory into one integrated worldview. In the same period, a single "foreign" policy emerged as an alternative to the many localized "frontier" policies hitherto pursued on the coast, in Xinjiang, and in Tibet. By unraveling Chinese, Manchu, and British sources to reveal the information networks used by the Qing empire to gather intelligence about its emerging rival, British India, this book explores China's altered understanding of its place in a global context. Far from being hobbled by a Sinocentric worldview, Qing China's officials and scholars paid close attention to foreign affairs. To meet the growing British threat, they adapted institutional practices and geopolitical assumptions to coordinate a response across their maritime and inland borderlands. In time, the new and more active response to Western imperialism built on this foundation reshaped not only China's diplomacy but also the internal relationship between Beijing and its frontiers.

Matthew W. Mosca is an Assistant Professor in the Department of History and the Henry M. Jackson School of International Studies at the University of Washington.

"With this impressive first book, Mosca is now a leader in using Manchu, Mongolian, Chinese, and European texts to rethink over five hundred years of Asian historiography. He demonstrates his erudition and deep knowledge of multi-lingual sources on almost every page of his book. His argument about the global convergence of historiography in the eighteenth to nineteenth centuries is very significant, as is his presentation of Chinese analytical sophistication and interpretive imagination."

"Matthew Mosca's meticulously researched book has not only solved my personal angst; it has also filled a serious vacuum between our burgeoning knowledge of Qing 'frontier policy' . . . This is an excellent, much-needed book, one that should be read by all sinologists working on late imperial China and scholars of early modern global history—as well as inquiring undergraduates seated in the back row."

"In this impressive book, Matthew W. Mosca demonstrates that the reasons for the massive Qing intelligence failure about the world at large and strategic vulnerability along its coast lay not only in its bureaucratic structure, but also in the nature of Chinese geographic epistemology and the modes of geographic writing practiced in late imperial times . . . Mosca's fresh and erudite book will surely make all readers reconsider our understanding of Qing world views and the background to the Opium War."

"To the old narrative of Chinese ignorance of diplomatic relations, Mosca's work provides, not a complete revision, but an intelligent and persuasive reformulation in term of intellectual history, and in doing so outlines a methodology that might well be applied to other fields of Qing political history. The book impresses with its philological dexterity, and draws on a rich body of previously untapped archival sources in Manchu and Chinese. Its scope makes it a contribution, not only to Qing history, but to the history of Chinese foreign policy more generally, and of Sino-Indian relations."

"Matthew W. Mosca has made a graceful and substantial contribution to our understanding not only of late imperial China (the expansive and multicultural Qing Empire in particular) but also of Inner Asian politics, the growth of 'British' India, and the nature of global interactions during the period from 1750 to 1860."

"Matthew Mosca's impressively researched and carefully structured new book maps the transformation of geopolitical worldviews in a crucial period of Qing and global history. . . . Readers from beyond the field of Chinese studies will find useful discussions here of multiple Qing modes of cartography, geography, and lexicography that inform a broader historical epistemology of the early modern world."

"Mosca presents a fresh, convincing take on Qing foreign affairs via close examination of how the state learned about and understood British India between 1757 and 1860. . . . Mosca analyzes the uneasy relationship between frontier policy and foreign policy in a multiethnic empire, offering much food for thought to theorists of international relations and to historians of Asia. Excellent scholarship, written with clarity and precision. . . . Highly recommended."

"Meticulously researched and compellingly presented, this book reads like a detective story. Where and what is the true India, and what does it mean for the Qing? Linking politics, foreign relations, cultural and intellectual history, this work is a must read in the current re-conceptualization of the early nineteenth century in China."

"With his clear articulation of Qing ruling elites as actively engaging the knowledge that constructed their worldview, Matthew Mosca in From Frontier Policy to Foreign Policy makes an important contribution to Qing studies and helps reshape our understanding of China's foreign relations in the age of Western imperialism."

"Mosca expertly revises our understanding of relations between Qing China and the emerging power of British India. Rather than being a failing polity, unable to control its fringes, China possessed sophisticated information systems to manage frontier communities. Yet only after 1850 was a broader 'foreign policy' formulated to handle aggressive western powers."

"Breaking the mold of the Chinese universalistic imagination of all under Heaven and the tributary relations in explaining the complexities and dialectics of local-empire relations, Mosca has fused cultural and intellectual history with geography, politics and foreign relations in his highly original and stimulating study of Qing perceptions of British India."

"Mosca's erudite study shows that the Qing were well aware of the British presence in India, not least because of encounters during the Gurkha wars of the late-eighteenth century, but that they failed to realise either that this was the same group of people that were making trouble at the opposite end of the empire or how wide-ranging British imperial ambitions were....[T]he wide-ranging and well-informed perspective Mosca brings to his subject makes this an important contribution to the literature." 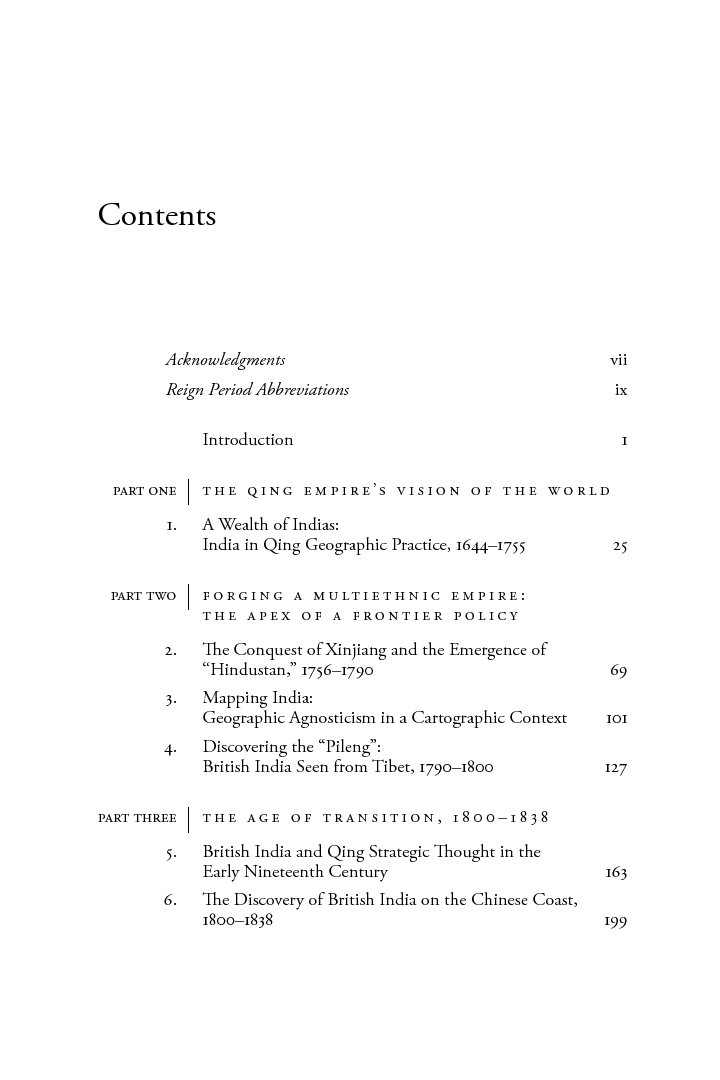 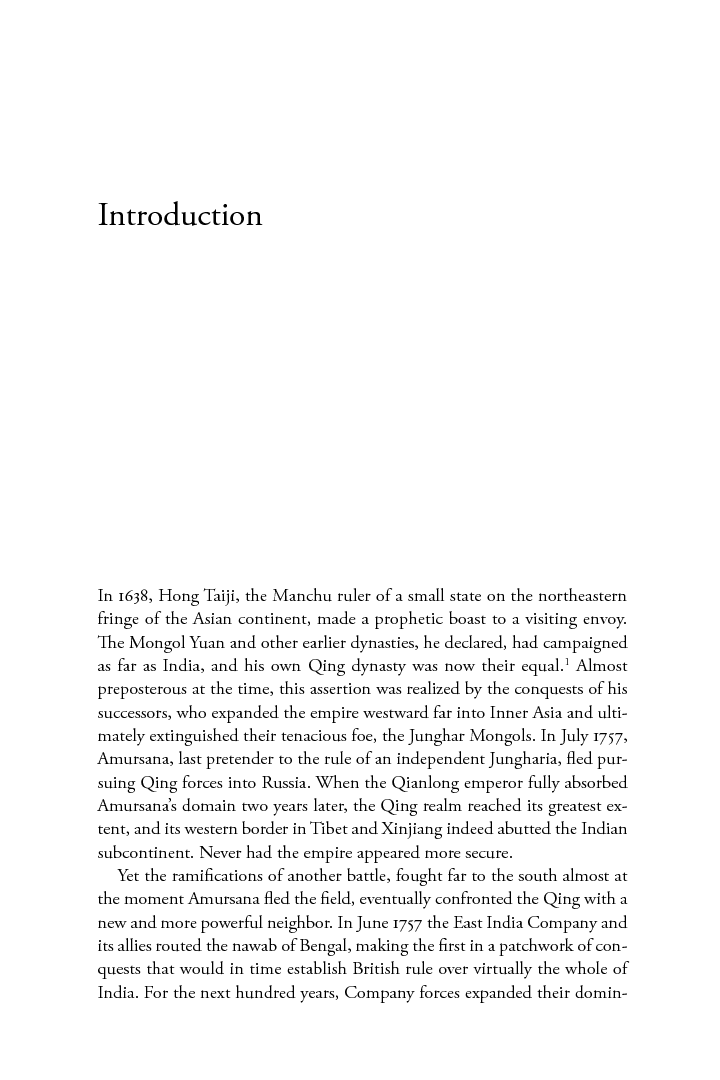