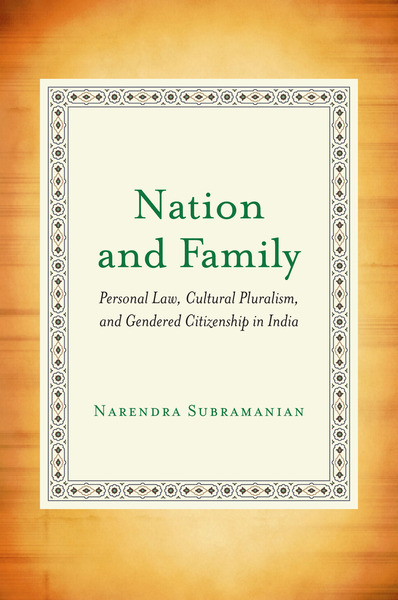 The distinct personal laws that govern the major religious groups are a major aspect of Indian multiculturalism and secularism, and support specific gendered rights in family life. Nation and Family is the most comprehensive study to date of the public discourses, processes of social mobilization, legislation and case law that formed India's three major personal law systems, which govern Hindus, Muslims, and Christians. It for the first time systematically compares Indian experiences to those in a wide range of other countries that inherited personal laws specific to religious group, sect, or ethnic group. The book shows why India's postcolonial policy-makers changed the personal laws they inherited less than the rulers of Turkey and Tunisia, but far more than those of Algeria, Syria and Lebanon, and increased women's rights for the most part, contrary to the trend in Pakistan, Iran, Sudan and Nigeria since the 1970s.

Subramanian demonstrates that discourses of community and features of state-society relations shape the course of personal law. Ruling elites' discourses about the nation, its cultural groups and its traditions interact with the state-society relations that regimes inherit and the projects of regimes to change their relations with society. These interactions influence the pattern of multiculturalism, the place of religion in public policy and public life, and the forms of regulation of family life. The book shows how the greater engagement of political elites with initiatives among the Hindu majority and the predominant place they gave Hindu motifs in discourses about the nation shaped Indian multiculturalism and secularism, contrary to current understandings. In exploring the significant role of communitarian discourses in shaping state-society relations and public policy, it takes "state-in-society" approaches to comparative politics, political sociology, and legal studies in new directions.

"[This book's] scholarship and empirical details and the body of literature and archival sources that it marshals which will be of immense use to students . . . [I]ts historical perspective and comparative analysis opens up the issue in a very different manner than has played out in India's dominant public discourse . . . [I]t deploys key social science categories such as institutions, ideas, interests, and social movements to understand the detours that personal law debates take. In doing so, this study breaks from the theoretical trend that has dominated academia in the last two decades or more, namely one that has paid disproportionate attention to textual analysis with a focus on specific texts and discourses to the neglect of empirical study of how groups of people act in resistance or domination, negotiation and alliance."

"Meticulously researched and cogently argued, Narendra Subramanian's Nation and Family is a welcome corrective to simplications inherent in much postcolonial discourse on Indian secularism. It demonstrates that neither the persistence of colonial legal categories nor the alleged self-ghettoisation of religious minorities can explain postcolonial changes in personal law. In addition, it offers important comparative insights into relations among secularism, family law, and visions of national community in other postcolonial nation-states."

"Nation and Family takes a new approach to the study of religion-based personal laws, particularly in India . . . The most important contribution of this book is its exploration of the relationship between the nation and the family within the context of the consolidation of state authority in postcolonial countries . . . Nation and Family is a truly multifaceted work which will be of value not only to scholars of religion and politics, but also to those interested in political history, comparative history, and gender studies."

"Subramanian has generated [his] explanatory framework based on a magnificent summary of family laws and their evolution across . . . the Islamic world from Morocco to Indonesia in the second half of the twentieth century. I admired Subramanian's quiet rejection of both the area-specialist's tendency to explain fairly common trajectories in terms of the specificities of a particular area's history . . . and the political scientist's propensity for building evaluative models based on culturally specific ideal types. The study of case law is excellent and illuminating, as are the discussions regarding Muslim institutions and associations concerned with the study and development of classical Islamic jurisprudence [fiqh] and of the efforts to connect that tradition to modern Indian law. Subramanian's overall recommendation is for culturally sensitive legal reform, [which] looks both plausible and admirable."

"In this book Subramanian addresses the complicated and often vexed relationship between personal law and the larger political/historical/legal milieu within which it develops and functions . . . He utilizes a comparative framework with appropriate references to several other countries to clarify and strengthen his case. The discussion is rich and astute, the scholarship careful and rigorous, and the language judicious and elegant . . . Summing Up: Highly Recommended."

"Nation and Family takes on the divisions of culture and religion in India and explores how they have played out in an unlikely setting: the courts and laws that adjudicate and regulate family life. Subramanian reveals how the experiences and struggles of diverse groups in fashioning personal law shaped the national project and the very meaning of modernity. A masterful exploration of nation-formation."

"With tremendous insight and fine scholarship, Subramanian traces the debates and advances in religious family law in India, but also places that story in a broad framework. Nation and Family advances a clear argument in comparative politics and undertakes the detailed analysis of legal reform in India."

"Nation and Family shines a spotlight on the intersection of group identity, law reform, and minority rights. Focusing on Indian family law, Subramanian examines changing group norms and conceptions of equality in a developing democracy. An insightful investigation of ethnic politics and the response of policy makers in the domain of legal pluralism."

"The book is a tour de force on comparatively approaching the question of secularism and cultural pluralism in postcolonial societies in Africa and Asia It will be an excellent resource for teaching graduate courses and will become a standard study to be cited in scholarly debates on comparative secularism and multiculturalism." 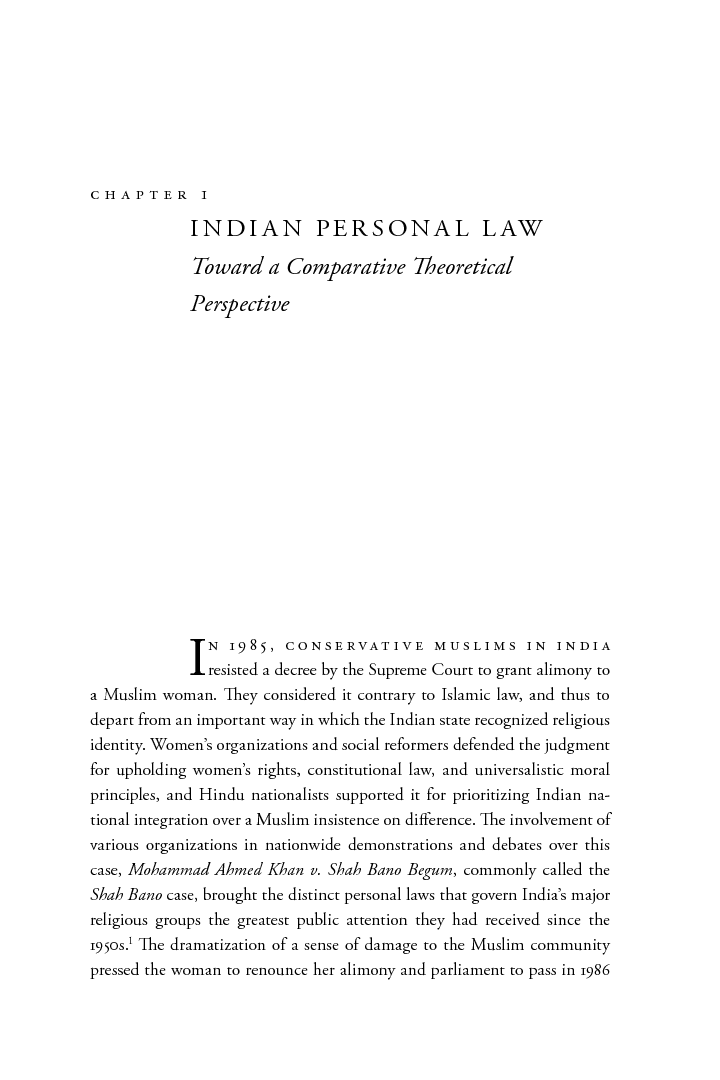 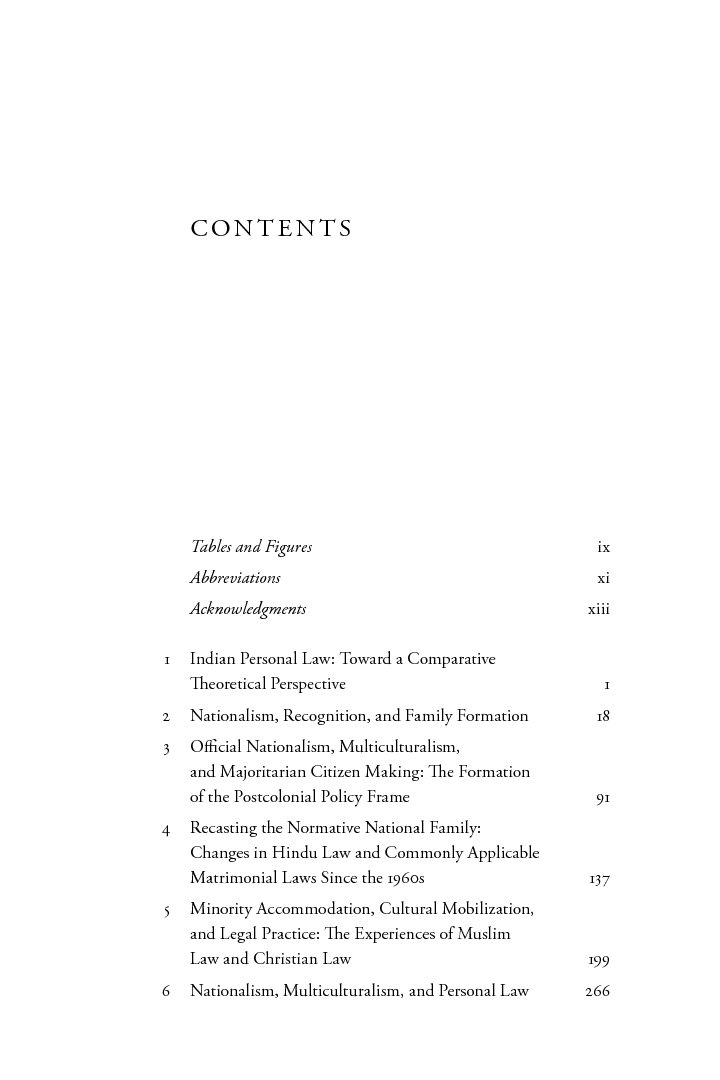 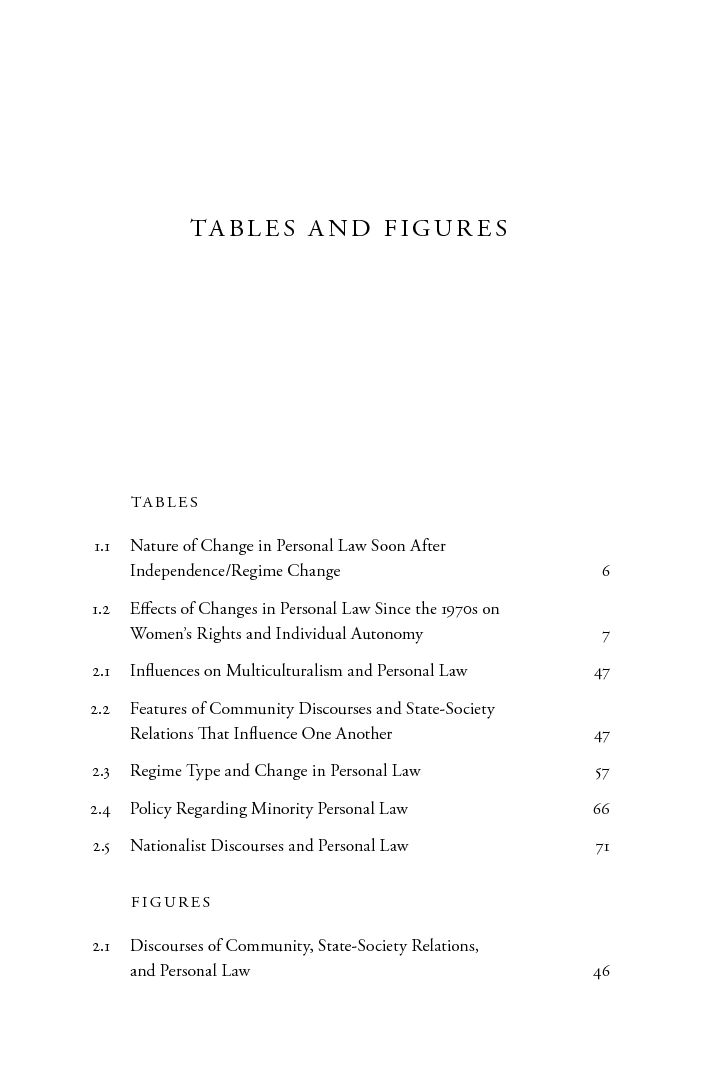