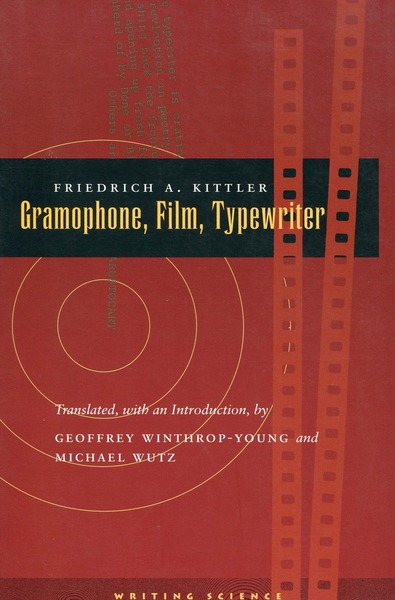 Toward the end of the nineteenth century, the hegemony of the printed word was shattered by the arrival of new media technologies that offered novel ways of communicating and storing data. Previously, writing had operated by way of symbolic mediation—all data had to pass through the needle's eye of the written signifier—but phonography, photography, and cinematography stored physical effects of the real in the shape of sound waves and light. The entire question of referentiality had to be recast in light of these new media technologies; in addition, the use of the typewriter changed the perception of writing from that of a unique expression of a literate individual to that of a sequence of naked material signifiers.

Part technological history of the emergent new media in the late nineteenth century, part theoretical discussion of the responses to these media—including texts by Rilke, Kafka, and Heidegger, as well as elaborations by Edison, Bell, Turing, and other innovators—Gramophone, Film, Typewriter analyzes this momentous shift using insights from the work of Foucault, Lacan, and McLuhan. Fusing discourse analysis, structuralist psychoanalysis, and media theory, the author adds a vital historical dimension to the current debates over the relationship between electronic literacy and poststructuralism, and the extent to which we are constituted by our technologies. The book ties the establishment of new discursive practices to the introduction of new media technologies, and it shows how both determine the ways in which psychoanalysis conceives of the psychic apparatus in terms of information machines.

Gramophone, Film, Typewriter is, among other things, a continuation as well as a detailed elaboration of the second part of the author's Discourse Networks, 1800/1900 (Stanford, 1990). As such, it bridges the gap between Kittler's discourse analysis of the 1980's and his increasingly computer-oriented work of the 1990's.

Friedrich A. Kittler is a professor at the Institute for Aesthetics and Cultural Studies at Humboldt University, Berlin.

"Kittler's thesis is timely and intriguing. . . . To read this book is to take a wild ride through philosophy, music, the visual arts, popular culture, engineering, psychoanalysis, the history of science, literature, communication studies, film studies, and more. . . . This book belongs on any reading list in media studies, and should be essential for anyone interested in the intersections of comparative literature, literary theory, and media studies. Gramaphone, Film, and Typewriter is a stunning achievement. . . ."

"Recommended for graduate collections in media studies, especially those including European scholarship."

"Friedrich Kittler proves a welcome exception to the standardized academic format of many of his German colleagues. . . . The excellent translation by Geoffrey-Winthrop Young and Michael Wutz is highly readable (no awkward Germanisms) and is preceded by a thorough and incisive introduction. . . . The present volume is Kittler's most accessible work so far, since it is written for expert and general reader alike."

"Kittler's broadband scholarly panoptics afford a sublime techno-discursive vista, and in particular a point of lucid observation on the ongoing relativization of literary production."