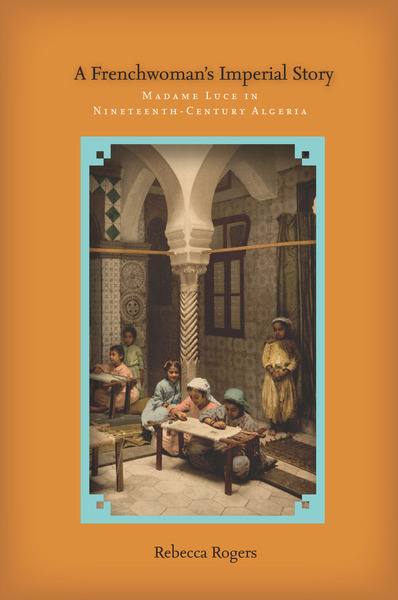 Honorable Mention in the 2014 Pinkney Prize, sponsored by the Society for French Historical Studies.

Eugénie Luce was a French schoolteacher who fled her husband and abandoned her family, migrating to Algeria in the early 1830s. By the mid-1840s she had become a major figure in debates around educational policies, insisting that women were a critical dimension of the French effort to effect a fusion of the races. To aid this fusion, she founded the first French school for Muslim girls in Algiers in 1845, which thrived until authorities cut off her funding in 1861. At this point, she switched from teaching spelling, grammar, and sewing, to embroidery—an endeavor that attracted the attention of prominent British feminists and gave her school a celebrated reputation for generations.

The portrait of this remarkable woman reveals the role of women and girls in the imperial projects of the time and sheds light on why they have disappeared from the historical record since then.

Rebecca Rogers is Professor of History at the Université Paris Descartes.

"Rogers's book is worth reading not only because it recounts a fascinating story about a mostly forgotten woman, but also because of the broader historical and methodological questions it addresses . . . Rogers builds a convincing case for the broader relevance of her study . . . In writing this remarkable book, Rogers has both drawn attention to this gap in our knowledge, and she has begun to fill it."

"In A Frenchwoman's Imperial Story: Madame Luce in Nineteenth-Century Algeria, Rebecca Rogers, a Professor at the Université Paris Descartes and an expert in the history of the French educational system, lucidly explores Luce's work in the field, bringing a wealth of precise details—everything from what the lessons in the school room were like to prize-giving ceremonies and hygiene inspections."

"This book is a thoroughly engaging contribution to the historical literature on nineteenth-century colonial Algeria . . . Rogers writes sensitively about Allix Luce's personal struggles while always remaining alert to her tendency to embroider her own story . . . Drawing on her deep familiarity with education for girls in nineteenth-century France, Rogers efficiently highlights what is 'colonial' about this story . . . It may not prove easy for historians of Algeria to recover women's lives as vivid as that of Madame Luce, but Rogers's pursuit of her subject through the archives should serve as inspiration to other researchers hoping to broaden our understanding of the gendered dynamics of French colony-building."

"Rogers contributes to a growing body of literature that calls into question the notion that imperialism was a largely masculine enterprise. In fact, Rogers builds on a number of studies that have included Mme. Luce and her school in their analyses of the history of women and empire. Yet, Rogers's book is the first to explore the life of this woman in greater detail, situating her initiatives in the larger histories of international feminism, material culture, and feminine education in both France and empire, and the politics of early colonial Algeria . . . Ultimately the biography of Mme. Luce does more than simply 'add color to the past.' By detailing how one woman and her goals of educating indigenous girls factored into larger ideas about France's civilizing mission, Rogers has shed new light on the significance of gender in the making of early colonial Algeria."

"Rogers instead uses the biography of Luce to challenge gender politics in the writing of history, and to explore the limitations of the archive. By specifically drawing attention to the silences in the archive, particularly that surrounding the indigenous girls who attended Luce's school, and counterbalancing this with the material legacy which they left (the embroidered goods, exhibited, for example, at the early universal exhibitions), she offers a reinterpretation of the colonization of Algeria during the nineteenth century—one which elucidates the role that women (European and indigenous) played in the development of Algeria . . . Indeed, her argument for the importance of studying this material culture as a means of demonstrating how 'native women' contributed actively to the social, economic and cultural changes in nineteenth-century Algeria could offer a solution to the silences of the archive and the exclusion of colonized women from official histories."

"In A Frenchwoman's Imperial Story Rebecca Rogers uses the fascinating career of Eugenie Allix Luce to illuminate the opportunities and constraints that presented themselves to women who became active participants in the French Empire. After six years of an unhappy marriage to a French schoolteacher, Eugenie Allix fled to Algeria in 1832, where she eventually remarried Louis Luce, a French soldier and musician, and became a prominent figure, opening a school for Muslim girls aimed at the 'fusion of civilizations.' Rogers uses Eugenie's career to trace the shifting views of the French Empire toward Arab education, which led to her move from book-learning to embroidery in the 1860s. In this innovative biography Rogers also tells us her own story, as she tracks Eugenie Luce across continents, in archives and libraries, and ponders the gaps, meanings, and legacies of Luce's fascinating life."

"Rogers's exemplary scholarship and nuanced narrative is essential reading for anyone interested in women's contributions to France's mission civilisatrice."

"Rebecca Rogers has written a first-rate biography about Eugénie Allix Luce (1804–1882), a determined French schoolteacher in mid-nineteenth-century Algiers. She has also made a significant contribution to the historiography of primary education, ethnic relations, cultural patrimony, international feminism, and colonial administration, among other inherently gendered issues in the social history of French Algeria."

"This book opens up an entire social universe detailing the vicissitudes of indigenous girls' schooling in French Algeria and the shifting politics of colonial education that remained largely concealed until now. Rogers' study stands out due to the originality of its approach, the freshness of its conceptualization, and the elegance and clarity of the prose."

"This work is a stunning achievement. It presents a fascinating and important contribution to the history of women, empire, and historical biography."

"Roger offers a fresh perspective on the French civilizing mission and the conquest and pacification of Algeria, highlighting previously neglected gendered dimensions of the colonial encounter and bringing to light the role played by both European and indigenous women and girls in the French political project and colonial Algeria's market economy."

"Rebecca Rogers' prizewinning A Frenchwoman's Imperial Story is a lively, intelligent, and evocative study that weaves together issues relating to empire, education, gender, and material culture. It reveals sophisticated uses of visual sources and of the caches of lettres-fleuves and administrative exchanges that Eugénie Luce left in her wake."

"The recent scholarship has given attention to Luce's achievements in Algeria but Rogers' tour de force is to use the polyphony of often discordant voices, combined with an impressive detective work on Luce and research on education in Algeria to offer a pictures of Luce as a key player for the schooling of Algerian girls . . . Rogers' book is a masterpiece of historical research and a thoroughly enjoyable scholarly piece to read." 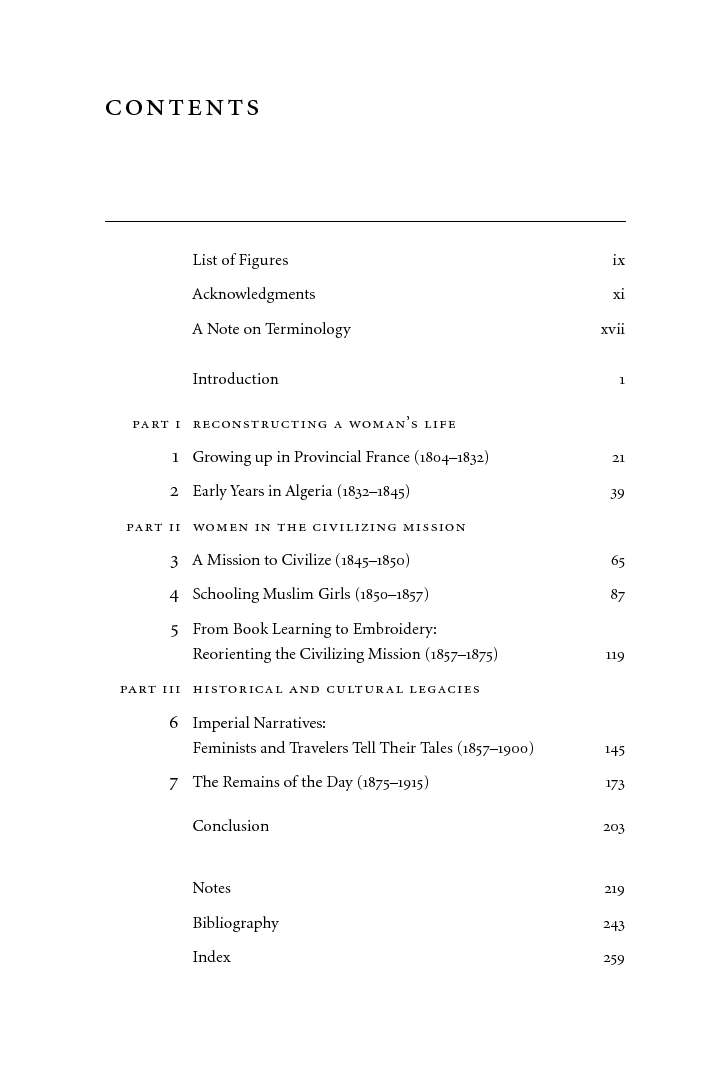 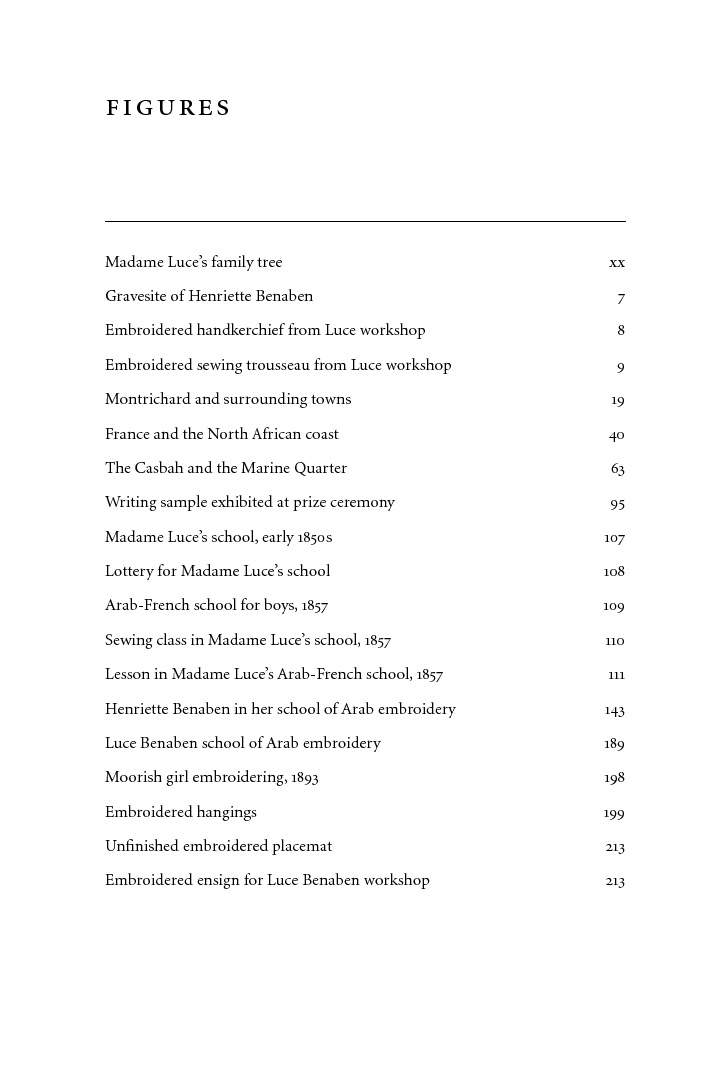 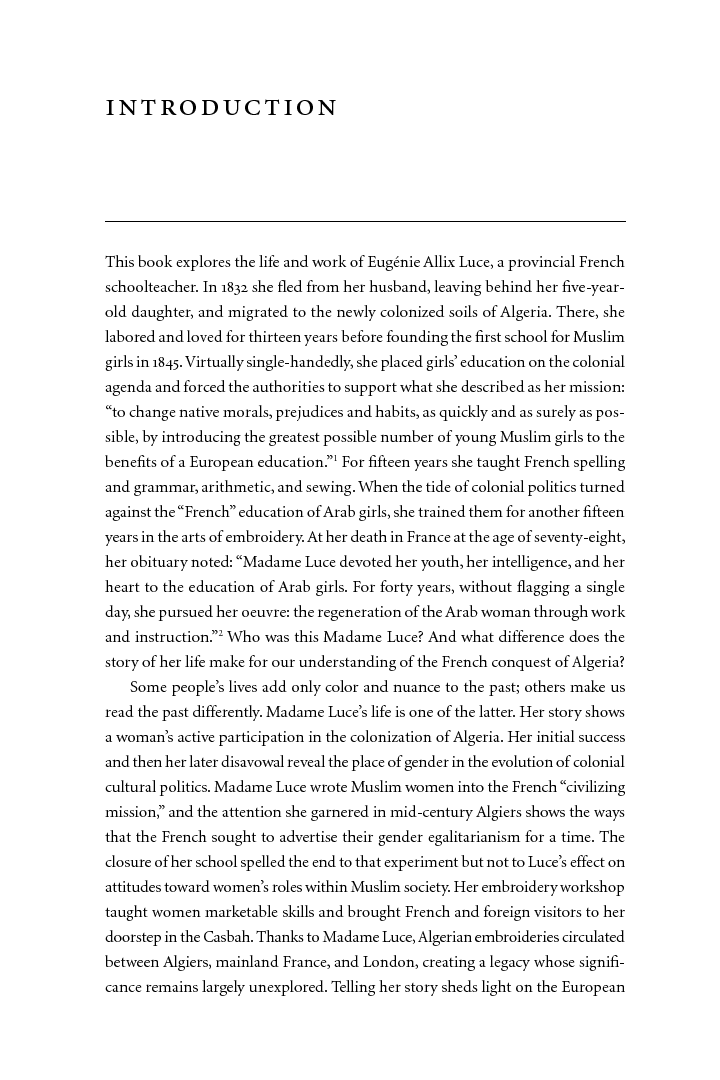