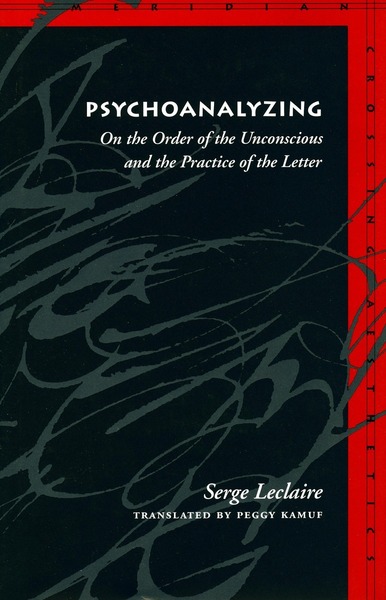 Psychoanalyzing
On the Order of the Unconscious and the Practice of the Letter
Serge Leclaire Translated by Peggy Kamuf
SERIES: Meridian: Crossing Aesthetics

Scarcely any theoretical discourse has had greater impact on literary and cultural studies than psychoanalysis, and yet hardly any theoretical discourse is more widely misunderstood and abused. In Psychoanalyzing, Serge Leclaire offers a thorough and lucid exposition of the psychoanalysis that has emerged from the French "return to Freud," unfolding and elaborating the often enigmatic pronouncements of Jacques Lacan and patiently working through the central tenets of the "Ecole freudienne." As a concise but nuanced introduction to the subject, Psychoanalyzing will prove indispensable to anyone interested in psychoanalysis, especially those curious about its Lacanian reconceptualization and the linguistic theory of the unconscious and its effects.

Leclaire's study is particularly valuable for the way its author links theoretical issues to psychoanalytic practice. The opening chapter—on listening—highlights the necessity, and the impossibility, of the "floating attention" required from the analyst, while preparing the reader for the following chapters, which deal with such topics as unconscious desire, how to speak of the body, and the intrication of the object and the "letter" (i.e. the signifier, the "material support that concrete discourse borrows from language"). The final chapter—on transference—shows how the analytical dialogue differs from other dialogues.

Despite the intricacy of its subject matter, the book takes very little for granted. It does not simplify the issues it presents, but does not assume a reader familiar with the concepts of psychoanalysis, let alone a reader acquainted with its French inflection. Each basic concept and term is carefully explained, so that the reader knows the meaning of "transference" or "primal scene" before proceeding to more advanced elements of psychoanalysis. Leclaire's text is not intended merely to be "user friendly"; its purpose is to clarify and advance, rather than to impress or convert.

Serge Leclaire was a practicing psychoanalyst in Paris and one of the first to join Lacan's school.