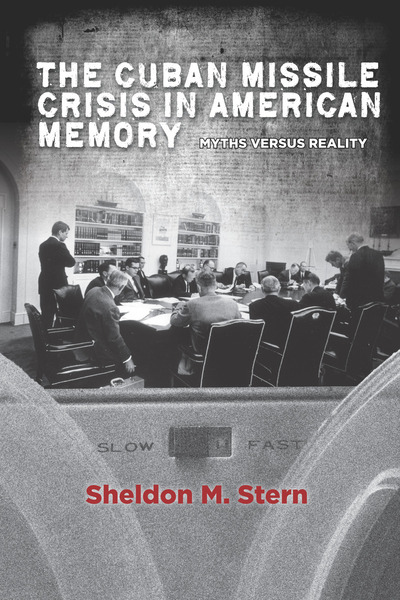 This book exposes the misconceptions, half-truths, and outright lies that have shaped the still dominant but largely mythical version of what happened in the White House during those harrowing two weeks of secret Cuban missile crisis deliberations. A half-century after the event it is surely time to demonstrate, once and for all, that RFK's Thirteen Days and the personal memoirs of other ExComm members cannot be taken seriously as historically accurate accounts of the ExComm meetings.

Sheldon M. Stern taught U.S. history at the college level for more than a decade before becoming historian at the John F. Kennedy Library in Boston, Massachusetts from 1977 to 2000. He was the first non-member of the ExComm, as well as the first historian, to listen to and evaluate all the secret White House tape recordings made during the 1962 Cuban missile crisis. Stern is the author of Averting the Final Failure: John F. Kennedy and the Secret Cuban Missile Crisis Meetings (2003), and The Week the World Stood Still: Inside the Secret Cuban Missile Crisis (2005), both in the Stanford University Press Nuclear Age Series.

"Stern's book is a great example of how much is being discovered and revised regarding the Cold War and its major events as more archival sources are declassified. This work is a must read for any scholar of the Cuban missile crisis or the Kennedy administration. It provides a complicated and broad understanding of both the crisis and the Kennedy presidency."

"Stern is not alone in questioning the precision of the transcripts offered, but he has made the most painstaking attempt to clarify what was really said and done."

"Timed for the 50th anniversary of the Cuban Missile Crisis, Stern. . . exposes myths about the crisis. [He] provides an important interpretation grounded in careful research."

"The Cuban Missile Crisis in American Memory offers a compelling reassessment of [the] events [of the 1962 Cuban Missile Crisis]. Using tapes of ExComm meetings (the ad hoc group formed to meet the crisis), Stern challenges much of the received wisdom. In particular, he rejects Robert F. Kennedy's dovish self-portrayal in Thirteen Days (1969), finding instead a consistent hardliner who, for instance, opposed an American naval blockade in favor of air strikes."

"In Stern's judgment, President Kennedy displayed leadership, remaining calm during the crisis and staring down his belligerent civilian advisers and the Joint Chiefs of Staff. . . Recommended."

"The Cuban missile crisis may be the most thoroughly documented yet grossly misunderstood episode in Cold War history, and the value of Sheldon Stern's splendid book is that it punctures the myths and unearths the truth so compellingly, drawing on irrefutable evidence, that you'll never think about the crisis or about JFK and his 'best and brightest' advisers in the same way again."

—Fred Kaplan, Slate's "War Stories" columnist; author of 1959 and The Wizards of Armageddon

"For nearly half a century national security decision makers have relied on three lessons derived inappropriately from the Cuban missile crisis: success depends on (1) the threat of superior force, (2) toughness and inflexibility, and (3) the use of a small ad hoc group like the ExComm to advise the President. Sheldon Stern's trenchant analysis, based on the most careful and exacting review to date of the ExComm's recorded conversations, turns the three traditional missile crisis lessons on their head. He effectively demonstrates that the outcome depended on President Kennedy's repeated refusal to use or threaten to use force, and on his persistent search for a compromise that could end the stand-off peacefully. Most important, Stern highlights that the ExComm did not provide Kennedy with the well-considered advice he supposedly used to avoid war, but instead Kennedy directed its discussions towards the conclusions he sought. This is a clearly written, timely, and significant contribution to our understanding of the Cuban missile crisis."

"It has taken nearly 50 years to get a history of the Cuban missile crisis as it really was, as opposed to how it was initially (and for many decades) managed and manipulated by the Kennedy inner circle as well as gullible journalists and historians. For that we have Sheldon M. Stern to thank." 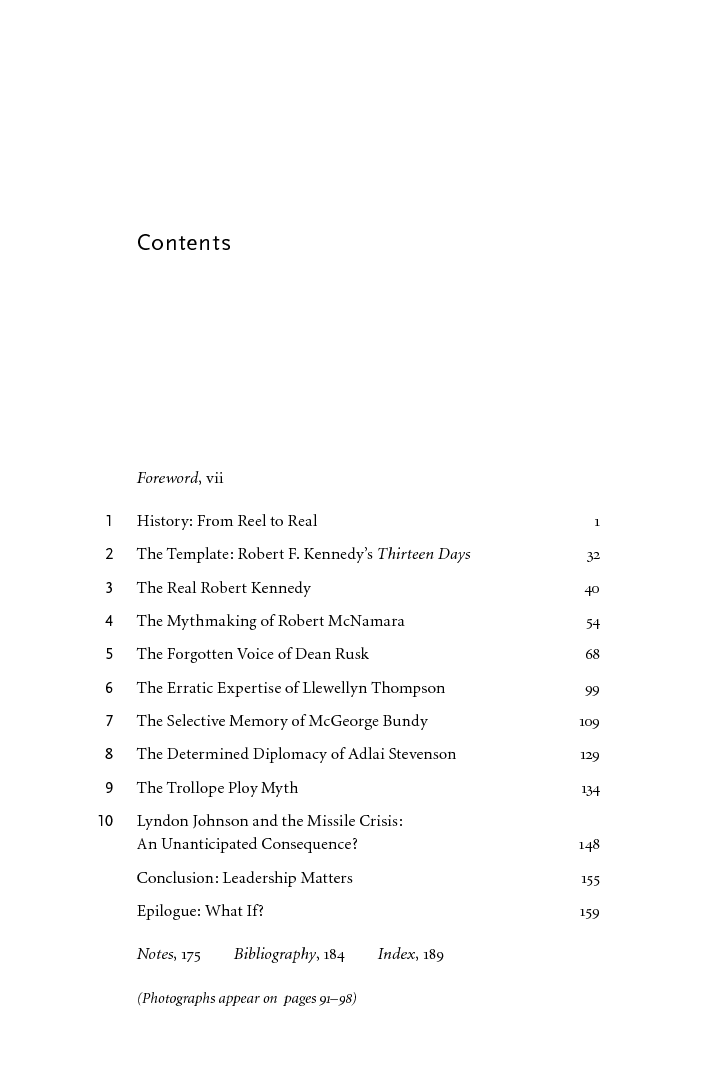 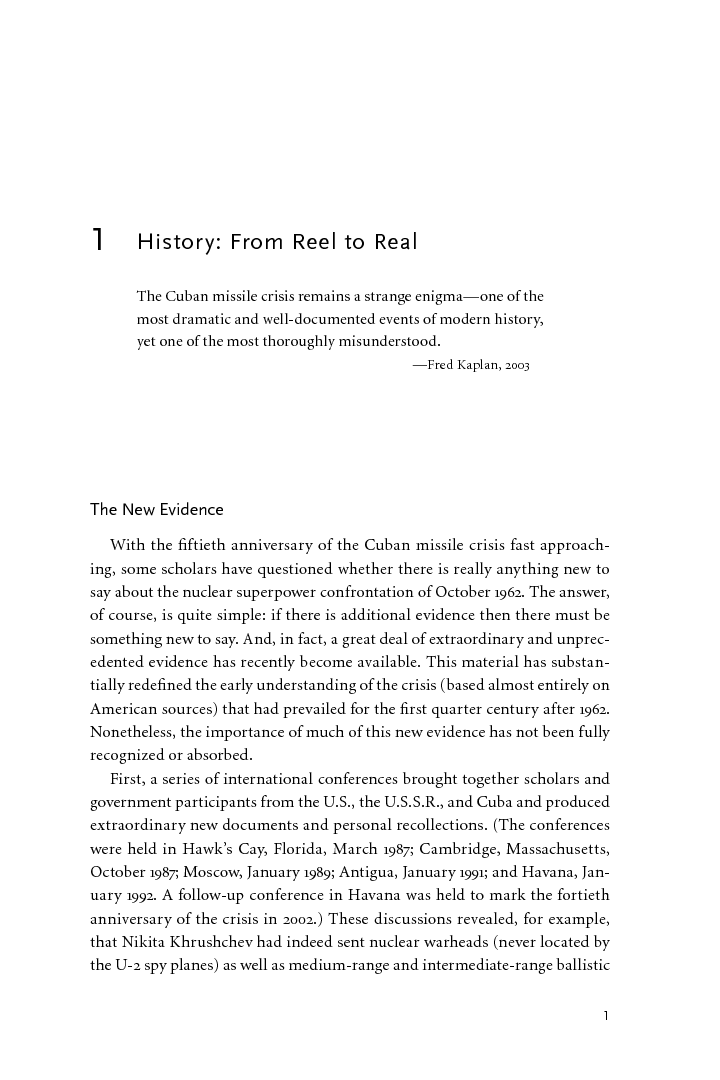 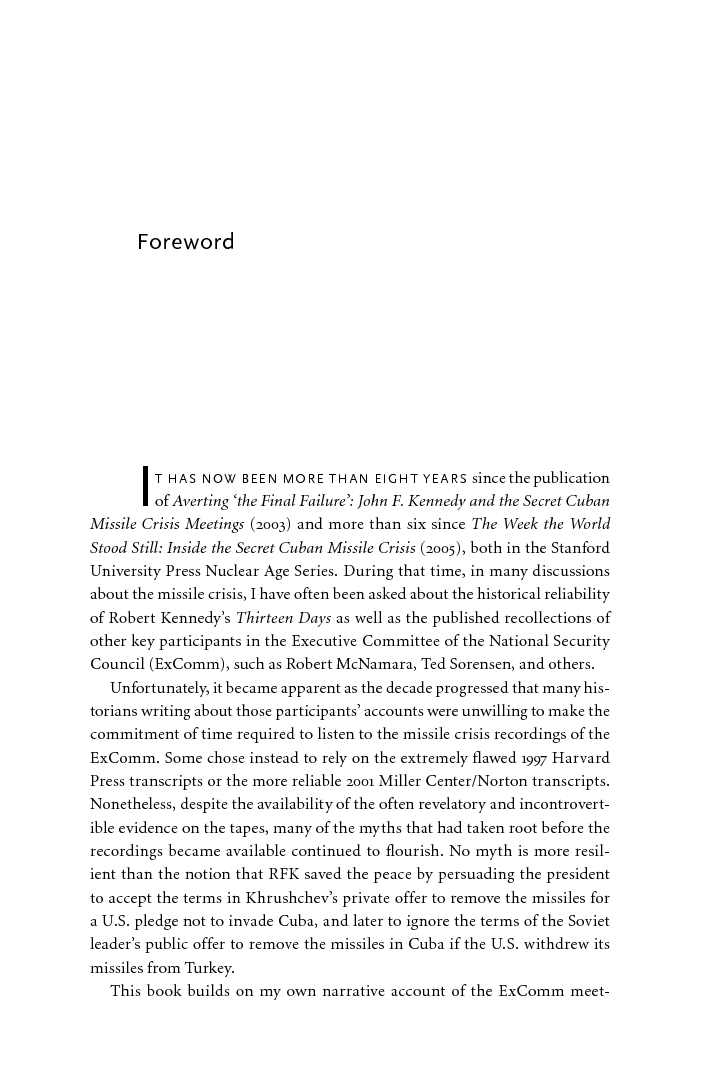