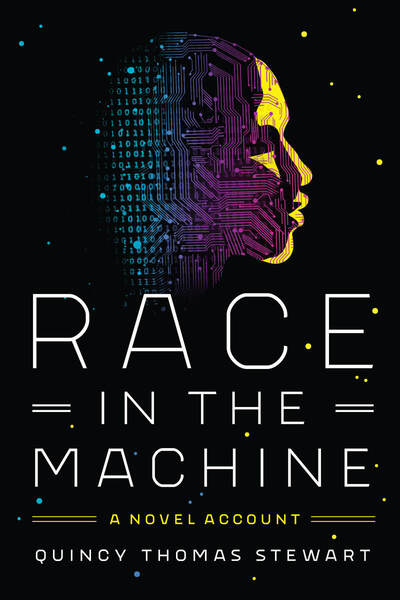 Race in the Machine
A Novel Account
Quincy Thomas Stewart

In a narrative full of social significance and poetically decorated with monks, vampires, and mythical statistics, Race in the Machine presents a world where the stories we use to explain race all simultaneously exist, within and around us, dictating our interactions and innermost beliefs.

The nameless protagonist, an enigmatic social mechanic at Nearbay Institute, living in a population of socially connected intelligent machines, encounters a simple query in the context of an introductory lecture: "What exactly is race? And what is it in the context of the social machine?" This prompt guides the protagonist along a twisting intellectual tale surrounding a series of experiments which explore: How many racists does it take to create systems of inequality? What role do non-racists actors play in upholding them? How is bias learned? How does it spread?

The narrator develops a distinct understanding of race through the figurative bending of time, dreams of a "race code" and by confronting a series of mysterious communications that remain just outside comprehension. Over the course of this journey, the answers to important questions about racial inequality quietly emerge for the protagonist. Scholarly encounters with both antagonistic colleagues and unexpected allies, culminate when the hero is forced to reach a devastating conclusion about themself and the world.

Stirring and luminous, Race in the Machine deftly oscillates between the allegorically simplified and the impossibly complex to weave an utterly unique and nuanced portrait of race in the modern world.

"Stewart's imaginative writing is best described as David Foster Wallace meets W.E.B Du Bois. Using a novel literary device, Stewart breathes fresh life into the computational sociology of race and racism. This book is a subtle, introspective work that captivates the reader through an Afrofuturist exploration of scientific methodology, social inequity and the human condition."

"Race in the Machine is truly a novel account. Deftly integrating fiction and social science scholarship, Quincy Stewart offers a highly innovative and fascinating exploration of race. This wholly original and engaging book bring to light the paradoxes and complexities in thinking about and studying race—and in so doing compels readers the rethink their assumptions regarding race."

"Race in the Machine is very well written and tells a story that challenges our narrative of what is race. The fictional nature of the narrative as told is an assault on the fabrications that social statistics are neutral, and that the quantitative accounting and surveillance capitalism are a rational outcome of mathematical logic. The author has asked us to be creative in our imagining the world that we create, and the potential of making it a better or worst world by our thinking about difference in the world. The world that we allow to be hampered by the reality of racial stratification. We must recognize the systemic nature of white supremacy as a problem for human survival. Race in the Machine revolutionizes the potential of Critical Race Quantitative scholars in the information sciences, technology sciences, communication science, and the social sciences."