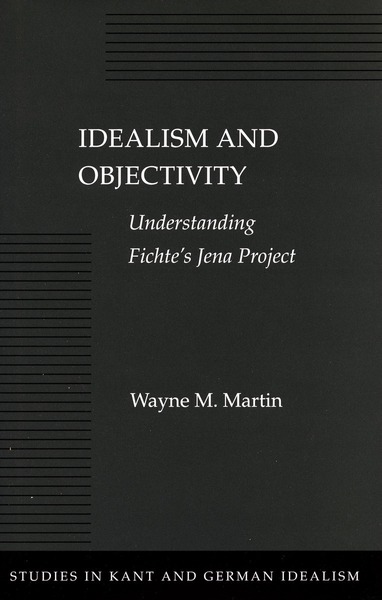 The theoretical writings from Johann Gottlieb Fichte’s short tenure at Jena (1794-99) are among the most difficult and influential works of classical German philosophy. Fichte’s appropriation of Kant’s transcendental project not only established the framework for the subsequent idealist tradition (Schelling, Hölderlin, Hegel), but also introduced philosophical themes and strategies that would dominate the Continental tradition well into the twentieth century.

This book offers a new interpretation of Fichte’s Jena system, focusing in particular on the problem of the objectivity of consciousness. The Jena system, the author argues, set out to develop an account of the constitutive structures of subjectivity in virtue of which conscious states have objective content. It is in the context of this project that Fichte’s central philosophical innovations must be understood: his account of the acts of “self-positing” and “opposing”; his attack on the thing in itself; the development of a dialectical strategy in transcendental inquiry; and his bold assertion of the “primacy of practice.”

Fichte’s investigations of objectivity find their center of gravity, it is argued, in two powerful insights. First, the theory of objectivity must be idealistic rather than naturalistic or “dogmatic.” That is, it must transcend the conception of human beings as simply complex mechanisms determined by their causal transactions with the world. Second, the theory of objectivity must find its basis in an account of the practical character of human beings—our character as agents, comporting ourselves teleogically in a world in which we find resistance.

The account of Fichte’s Jena project developed here demonstrates that Fichte’s thought is of far more than antiquarian interest. In its attempt to explore the limits of naturalistic accounts of human subjectivity and its articulation of the practical foundations of human representational capacities, Fichte’s Jena project is of direct relevance to contemporary debates in both analytic and continental philosophy.

Wayne M. Martin is Assistant Professor of Philosophy at the University of California, San Diego.