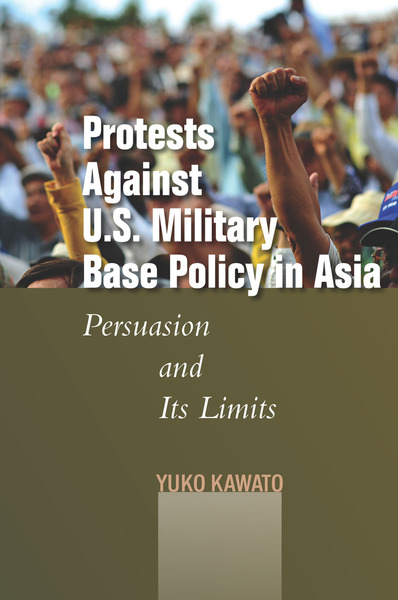 Protests Against U.S. Military Base Policy in Asia
Persuasion and Its Limits
Yuko Kawato
SERIES: Studies in Asian Security

Since the end of World War II, protests against U.S. military base and related policies have occurred in several Asian host countries. How much influence have these protests had on the p;olicy regarding U.S. military bases? What conditions make protests more likely to influence policy? Protests Against U.S. Military Base Policy in Asia answers these questions by examining state response to twelve major protests in Asia since the end of World War II—in the Philippines, Okinawa, and South Korea.

Yuko Kawato lays out the conditions under which protesters' normative arguments can and cannot persuade policy-makers to change base policy, and how protests can still generate some political or military incentives for policy-makers to adjust policy when persuasion fails. Kawato also shows that when policy-makers decide not to change policy, they can offer symbolic concessions to appear norm-abiding and to secure a smoother implementation of policies that protesters oppose. While the findings will be of considerable interest to academics and students, perhaps their largest impact will be on policy makers and activists, for whom Kawato offers recommendations for their future decision-making and actions.

Yuko Kawato is a Research Fellow at the Asia Center, a think tank in Paris, France.

"Kawato draws on 12 case studies to determine the past and future policy impacts of protests against U.S. military bases in Asia. Analyzing major demonstrations from 1945 to the present, he outlines the conditions under which protest is most and least likely to succeed in influencing base policy."

"Murders, rapes, deadly accidents, environmental destruction and land seizures by U.S. forces based in Asian countries for more than half a century have fueled the protest movements this book describes and evaluates for their effectiveness. Yuko Kawato provides a thorough, yet concise history of U.S. military bases in Japan, South Korea, and the Philippines, and a cogent analysis of how the governments of these countries and the U.S. respond to organized protests over the problems they cause."

"A novel, far-reaching, and important comparative assessment of Asian opposition to U.S. forward deployment policies across the post-war period. Contains concrete and useful suggestions for American policy response as well."