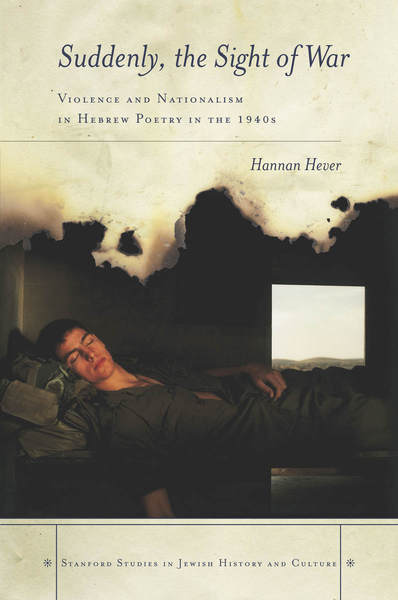 Suddenly, the Sight of War
Violence and Nationalism in Hebrew Poetry in the 1940s
Hannan Hever
SERIES: Stanford Studies in Jewish History and Culture

Suddenly, the Sight of War is a genealogy of Hebrew poetry written in pre-state Israel between the beginning of World War II and the War of Independence in 1948. In it, renowned literary scholar Hannan Hever sheds light on how the views and poetic practices of poets changed as they became aware of the extreme violence in Europe toward the Jews.

In dealing with the difficult topics of the Shoah, Natan Alterman's 1944 publication of The Poems of the Ten Plagues proved pivotal. His work inspired the next generation of poets like Haim Guri, as well as detractors like Amir Gilboa. Suddenly, the Sight of War also explores the relations between the poetry of the struggle for national independence and the genre of war-reportage, uniquely prevalent at the time. Hever concludes his genealogy with a focus on the feminine reaction to the War of Independence showing how women writers such as Lea Goldberg and Yocheved Bat-Miryam subverted war poetry at the end of the 1940s. Through the work of these remarkable poets, we learn how a culture transcended seemingly unspeakable violence.

Hannan Hever is the Jacob and Hilda Blaustein Professor of Hebrew Language and Literature at Yale University. He is the author of several books, including Producing the Modern Hebrew Canon.

"An important work by a brilliant scholar, Suddenly, the Sight of War is an important contribution to understanding the poetic responses to World War II in Hebrew poetry."

"Suddenly, the Sight of War is an erudite research that proposes an original reading of Hebrew poetry at a time of deep cultural and political reshaping....Suddenly, the Sight of War takes the reader on a poetic voyage that deeply helps understanding the impact that the Second World War and 1948 had on the formation of Israeli culture and confirms Hannan Hever as one of the most authoritative and original scholars of modern Hebrew literature."