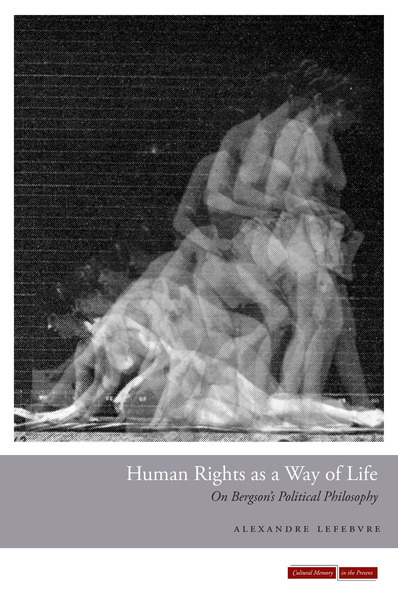 Human Rights as a Way of Life
On Bergson's Political Philosophy
Alexandre Lefebvre
SERIES: Cultural Memory in the Present

The work of Henri Bergson, the foremost French philosopher of the early twentieth century, is not usually explored for its political dimensions. Indeed, Bergson is best known for his writings on time, evolution, and creativity. This book concentrates instead on his political philosophy—and especially on his late masterpiece, The Two Sources of Morality and Religion—from which Alexandre Lefebvre develops an original approach to human rights.

We tend to think of human rights as the urgent international project of protecting all people everywhere from harm. Bergson shows us that human rights can also serve as a medium of personal transformation and self-care. For Bergson, the main purpose of human rights is to initiate all human beings into love. Forging connections between human rights scholarship and philosophy as self-care, Lefebvre uses human rights to channel the whole of Bergson's philosophy.

Alexandre Lefebvre is Senior Lecturer in the Department of Government and International Relations and the Department of Philosophy at the University of Sydney. He is author of The Image of Law: Deleuze, Bergson, Spinoza (Stanford, 2008).

"Alexandre Lefebvre's beautifully conceived book is a bid to revive the moral philosophy of Henri Bergson, notably in the Two Sources of Morality and Religion (1932), for our own age of human right . . . Lefebvre revisits it in an accessible and demotic style that suggests how easily a wide range of readers (including students of very different philosophical traditions) would gain from reading this book."

"By analyzing Bergson's moral thinking from a contemporary viewpoint, the book advances a theory of human rights on the basis of self-care . . . The book's great merit is to introduce a novel approach to human rights studies, one that can eventually account for the fluidity and inconsistencies of the subject. More controversially, but no less stimulating, is Lefebvre's aspiration to introduce 'mysticism' as a procedure for philosophical research on the basis of Bergson's concept of open love."

"He offers a creative synthesis of contemporary human rights theory, the philosophy of self-care, and several generations of Bergson scholarship; the result should be of interest to a wide range of scholars . . . Although human rights are often conceived in terms of political and legal measures to protect people from harm, Lefebvre's most original suggestion is to treat them in addition as forms of self-care or processes of conversion."

"Alexandre Lefebvre took on the challenge, presenting his outlook with the required philosophical depth and writing style that grabs the reader from the start . . . Human Rights as a Way of Life does not take the easy path of arguing in favor of Bergson without facing some of the hidden implications of his thought. On the contrary, the depth and sharpness of Lefebvre's arguments are revealed as he presents and ingeniously answers some of the major critiques that Bergson's theoretical stands face . . . Thus, in its philosophical contents, Human Rights as a Way of Life makes several important contributions."

—Magda Costa-Carvalho, The Review of Politics

"Through a distinctive interpretation of [Two Sources of Morality and Religion], Lefebvre's provocative work of genuine, scholarly creativity is the first monograph on human rights devoted to Bergson's thought . . . Lefebvre's work returns us to a nest of central questions in political philosophy and human-rights literature by returning these discussions to the level of the everyday agent—whether she comports herself with a closed or open love, an attitude or disposition that weakens or strengthens her commitment to human rights. As such, this work returns political philosophy and human-rights theory to 'a way of life', and it should be read closely and taken seriously."

"Clearly and engagingly written, with a good bibliography. . . . Recommended."

"An informed, informative, detailed, and impressive work of seminal scholarship, Human Rights As A Way Of Life is an important contribution and a highly recommended addition to academic library Political Philosophy reference collections and supplemental reading lists."

"Lefebvre's new book is a fascinating interpretation of Bergson's last work . . . Lefebvre teases out the political implications of The Two Sources of Morality and Religion, with its equally lovely and confronting description of open and closed societies . . . Thinking like Lefebvre's, channeling Bergson, can help jump the needle out of the deepening grooves of party-political discourse."

"Pierre Hadot wrote that essential to Bergsonism is the idea that philosophy entails the transformation of perception. In this hugely instructive new book Alexandre Lefebvre shows what such a transformation means for our appreciation of human rights. For him we require a new way of being in the world, one that involves a fundamental self-transformation and establishing relationships with others based on generosity and love. The remarkable innovation of this text is to use Bergson's philosophy for this end and to show that human rights involve a practice of self-care, one that opens us up to the world and to life and in which love is no longer tied to preference, exclusion, and closure. This message remains as vital today as when Bergson first attempted to articulate it in the 1930s. Lefebvre is to be congratulated for producing such a novel and fresh approach to the issue of human rights. The book is a fabulous exercise in contemporary philosophizing and deserves to be widely read."

"Because of its clarity and accessibility, this study would make a good textbook. Any course on mysticism which makes a claim to completeness should include Lefebvre's book. So should a course which attempts to study Bergson's later thought or the relations between process philosophy and religion." 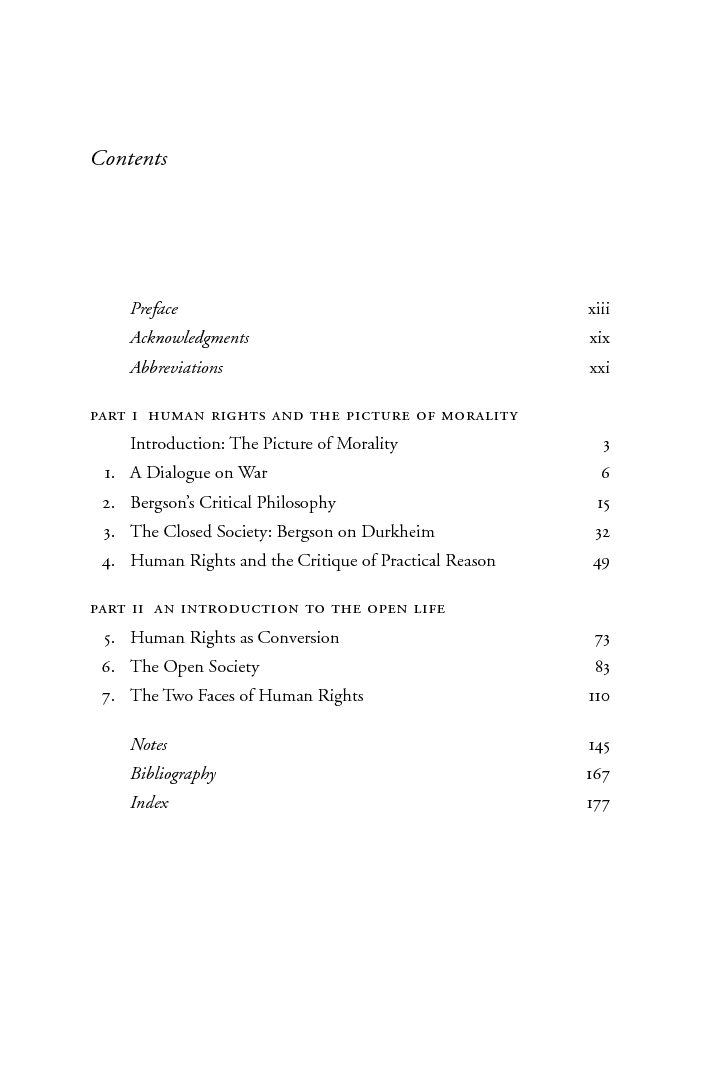 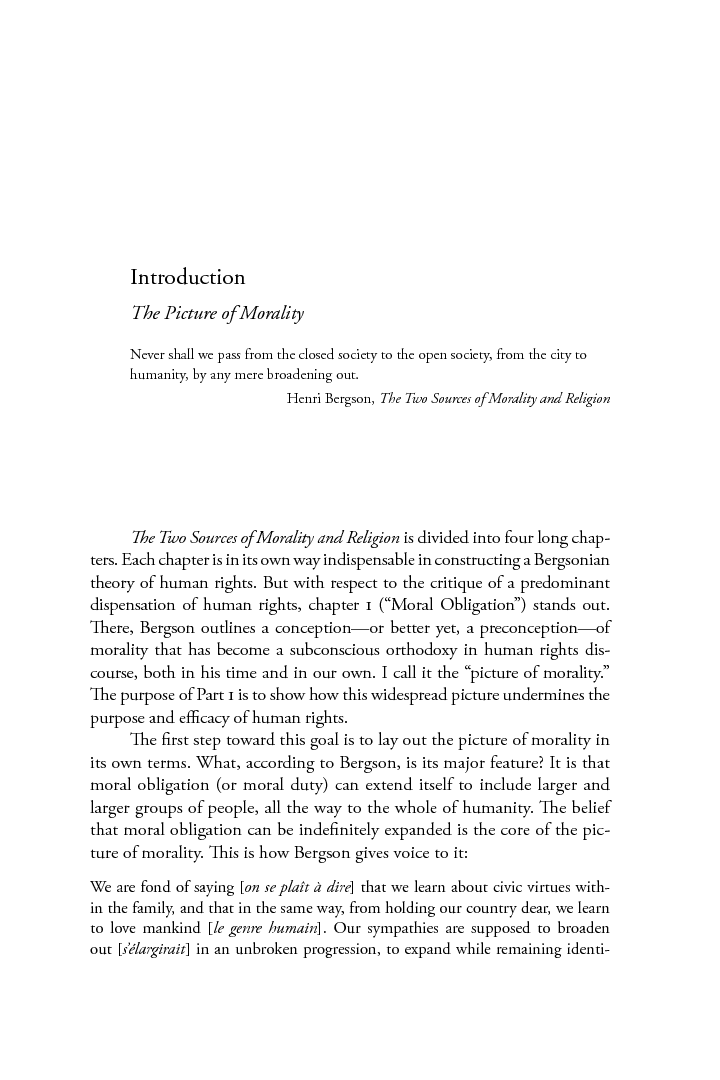 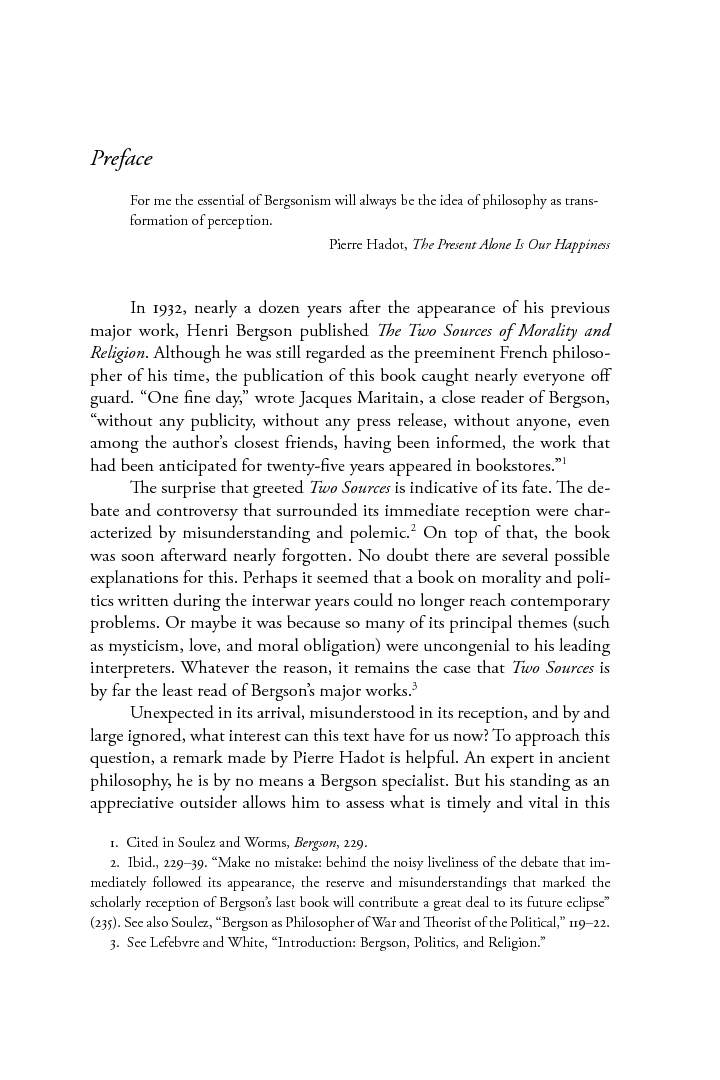