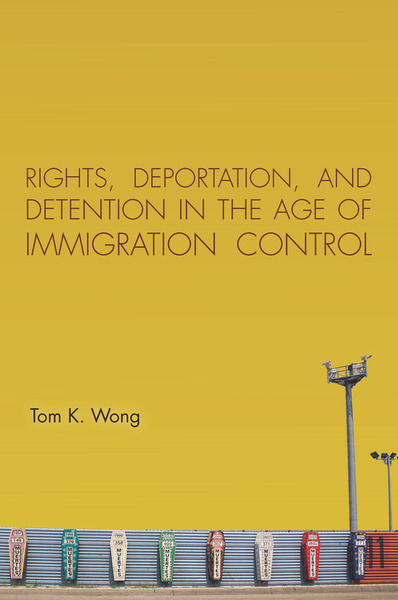 Rights, Deportation, and Detention in the Age of Immigration Control
Tom K. Wong

Immigration is among the most prominent, enduring, and contentious features of our globalized world. Yet, there is little systematic, cross-national research on why countries "do what they do" when it comes to their immigration policies. Rights, Deportation, and Detention in the Age of Immigration Control addresses this gap by examining what are arguably the most contested and dynamic immigration policies—immigration control—across 25 immigrant-receiving countries, including the U.S. and most of the European Union. The book addresses head on three of the most salient aspects of immigration control: the denial of rights to non-citizens, their physical removal and exclusion from the polity through deportation, and their deprivation of liberty and freedom of movement in immigration detention.

In addition to answering the question of why states do what they do, the book describes contemporary trends in what Tom K. Wong refers to as the machinery of immigration control, analyzes the determinants of these trends using a combination of quantitative analysis and fieldwork, and explores whether efforts to deter unwanted immigration are actually working.

Tom K. Wong is an Assistant Professor of Political Science at the University of California, San Diego.

"Tom K. Wong's book, Rights, Deportation, and Detention in the Age of Immigration Control, presents big ideas, new and vital data, and updates to immigration theories that will be useful for students and scholars of immigration studies. Sharply written and edited, this book reads like a valedictory monograph from a seasoned scholar of immigration control."

"In this book Tom Wong moves the field of immigration studies forward by opening up an area that has heretofore been considered too difficult to grapple with in a meaningful way. The book will be an important contribution to the field."

"Rights, Deportation and Detention offers a complex view of U.S. and European deportation regimes set in the context of global migration....Instead of forcing comparisons of data lacking statistical significance, the author instead presents the complexity as a whole—his key and critical finding—and points to areas that merit further scrutiny."