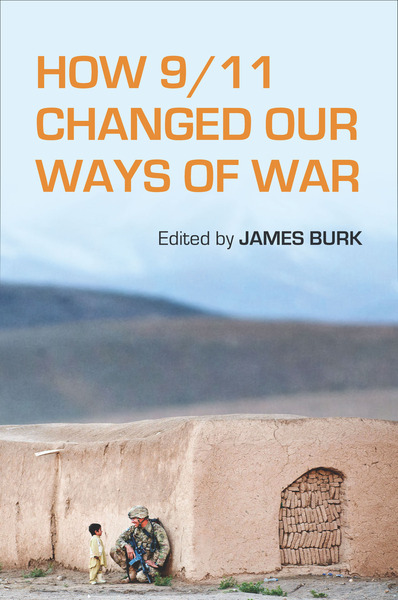 Following the 9/11 attacks, a war against al Qaeda by the U.S. and its liberal democratic allies was next to inevitable. But what kind of war would it be, how would it be fought, for how long, and what would it cost in lives and money? None of this was known at the time. What came to be known was that the old ways of war must change—but how?

Now, with over a decade of political decision-making and warfighting to analyze, How 9/11 Changed Our Ways of War addresses that question. In particular it assesses how well those ways of war, adapted to fight terrorism, affect our military capacity to protect and sustain liberal democratic values.

The book pursues three themes: what shaped the strategic choice to go to war; what force was used to wage the war; and what resources were needed to carry on the fight? In each case, military effectiveness required new and strict limits on the justification, use, and support of force. How to identify and observe these limits is a matter debated by the various contributors. Their debate raises questions about waging future wars—including how to defend against and control the use of drones, cyber warfare, and targeted assassinations. The contributors include historians, political scientists, and sociologists; both academics and practitioners.

James Burk is Professor of Sociology at Texas A&M University. He is the editor with David Segal of the four-volume reference work Military Sociology.

"This tightly edited work focuses on how the terrorist attacks of September 11, 2001, transformed subsequent Western decisions to go to war, how to fight, and how to mobilize . . . The contributors have solid credentials and include a mix of European and U.S. experts, which enriches the consideration of how 9/11 and its aftermath affects the West as a whole. A fluid style and solid argumentation throughout enhance the accessibility of the book for upper-level undergraduates as well as graduate students and professionals. Reliance on both political and sociological perspectives adds to the cross-disciplinary attractiveness of the book, as does attention to both normative and instrumental perspectives . . . Highly recommended."

"How 9/11 Changed Our Ways of War is a fascinating question to which this collection of essays by International Relations scholars from both sides of the Atlantic provides a diverse and thought-provoking range of answers . . . This is a wise and thoughtful book which deserves to be read widely.—David Fisher, International Affairs

"How 9/11 Changed Our Ways of War is a provocative and timely contribution to the debate about the use of force since the invasions of Afghanistan and Iraq. This thoughtful volume should spark a lively discussion and help set the terms of the debate."

"America's post-9/11 counterinsurgencies highlight changes in the ways the nation initiates and conducts the kinds of conflicts that will challenges us through the 21st century. This excellent volume provides rich cross-disciplinary and cross-national perspectives that should influence and shape our understanding of these processes in terms of both policy and scholarship."

"Western societies and their governments have clearly been jolted by the feeble outcomes of two costly wars in Iraq and Afghanistan. To learn from both political and sociological perspectives why and how this chastening has changed Western ways of war, this is the volume to study and to teach. On this topic James Burk and his international colleagues are in a league by themselves, and this book shows why." 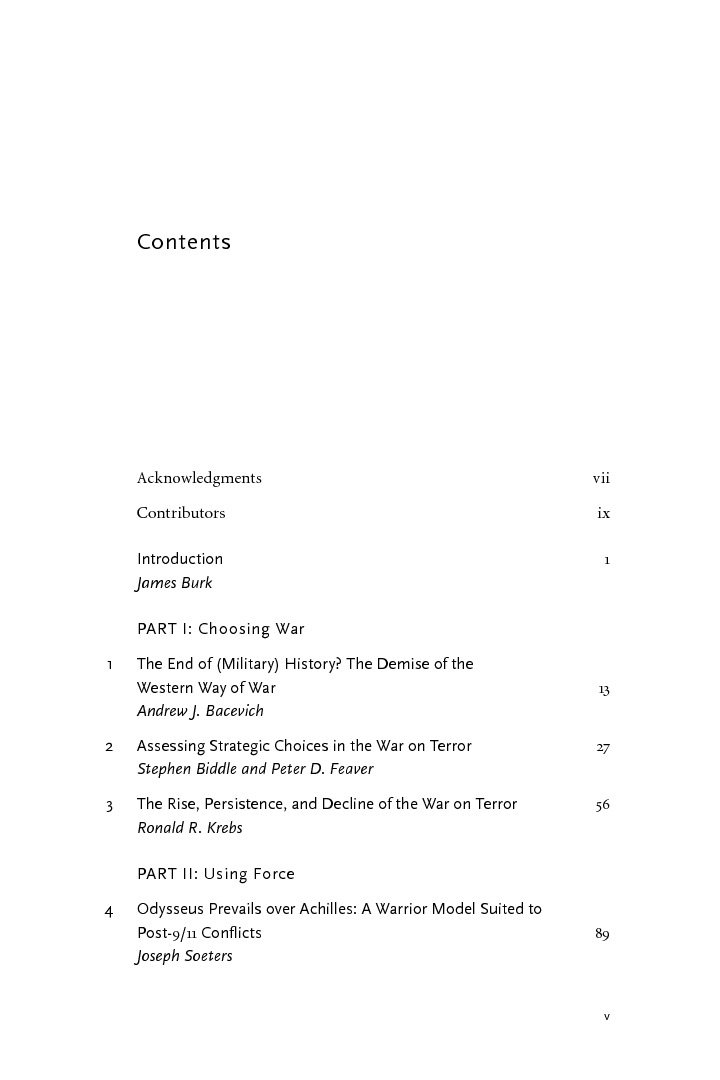 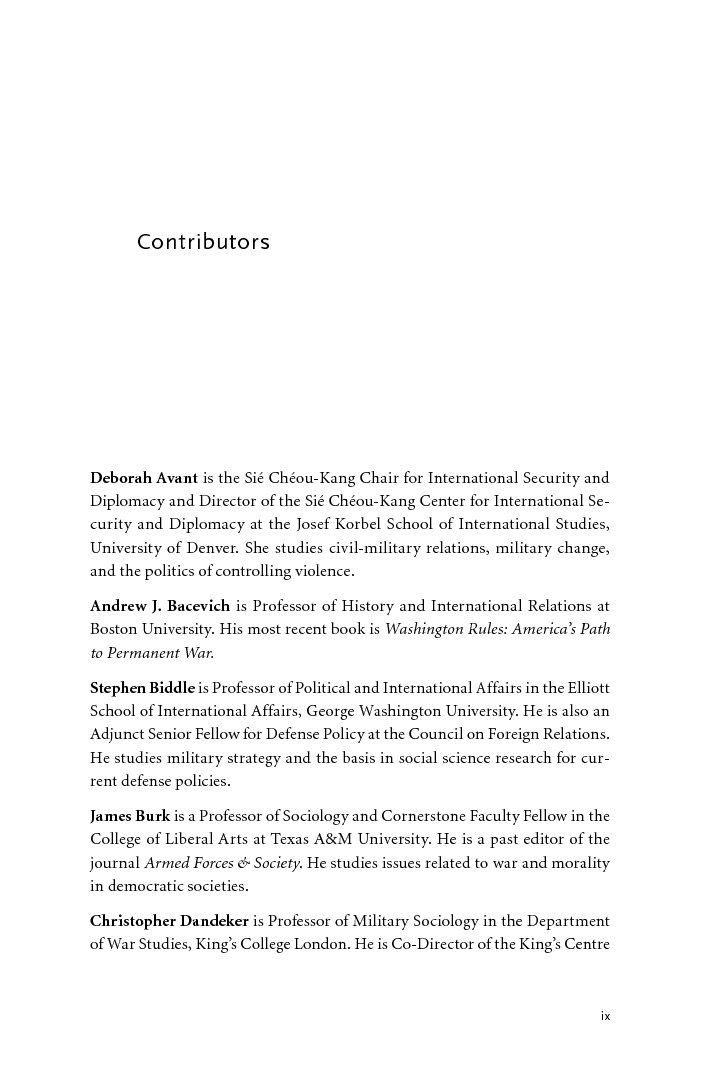 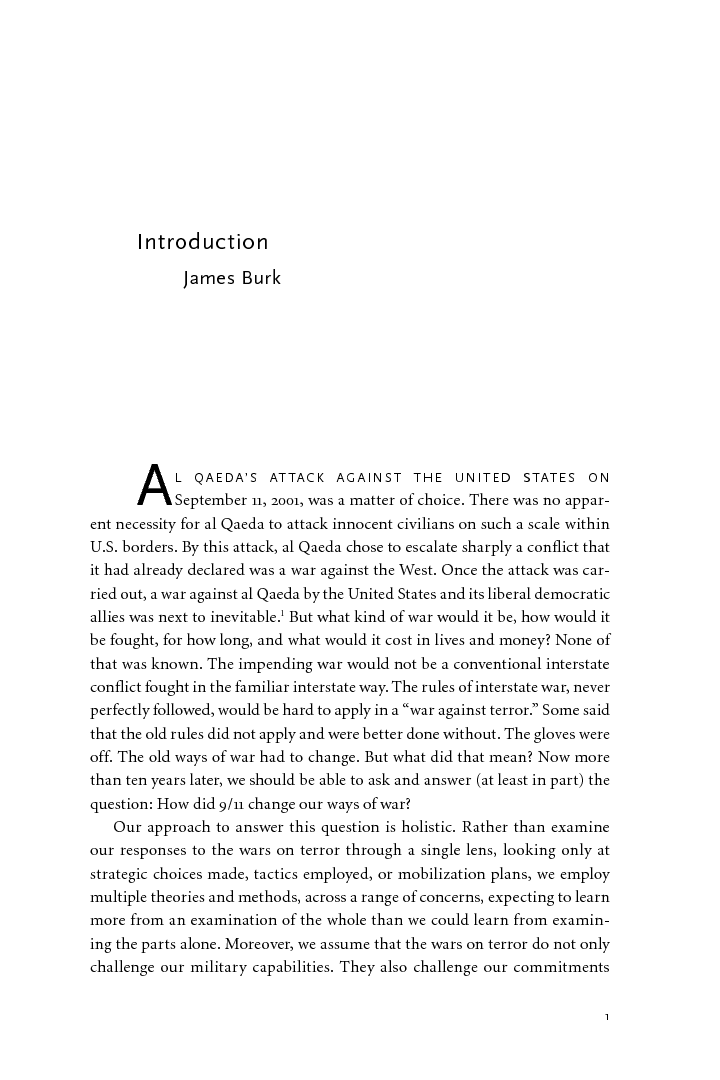