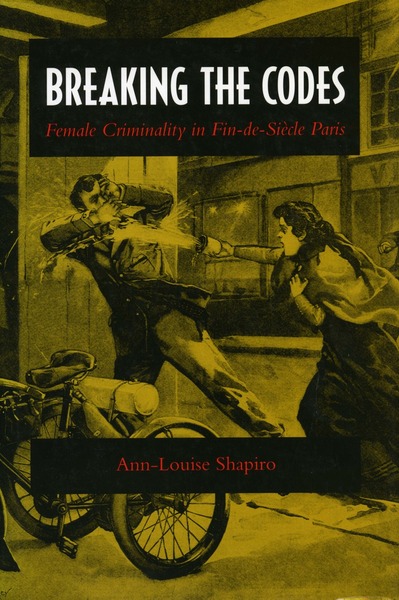 Breaking the Codes is a cultural history of the fin-de-siecle that uses the "problem" of the criminal woman to examine both the debates around the appropriate place of women in French society and the ways in which issues of gender were central to the most important cultural transformations of the period.

The author asserts that "female criminality" was a code that condensed and obscured larger concerns. For example, to what degree and in what ways did the symbolic overtones of female criminality connect to the substantive issues that appeared over and over again in the stories of women's crime? How were the crimes of domestic violence, infanticide, and abortion interpreted in the context of broader debates about divorce, depopulation, sexuality, and women's roles in the public sphere? What was the role of expert commentary - from the forensic psychiatrist, the criminologist, the legal scholar - in producing a normative code for female behavior? And how did this code accommodate or resist the newly recognized voice of popular opinion and changing notions of citizenship?

This study demonstrates both the inadequacy of the categories of public and private as they have been conventionally used to segregate the subjects of historical inquiry and the artificiality of the boundaries between high and low culture. Instead, it moves between domestic life and public courtrooms, between social science literature and popular journalism, analyzing the complex responses to female crime among different constituencies and through different genres. In so doing, the author sheds light on various overlapping processes of cultural negotiation in a period of profound change.

"Well-written, informed by feminist and literary theory, and ambitious, Breaking the Codes is a strong entry in the new cultural historiography of crime and criminal justice."