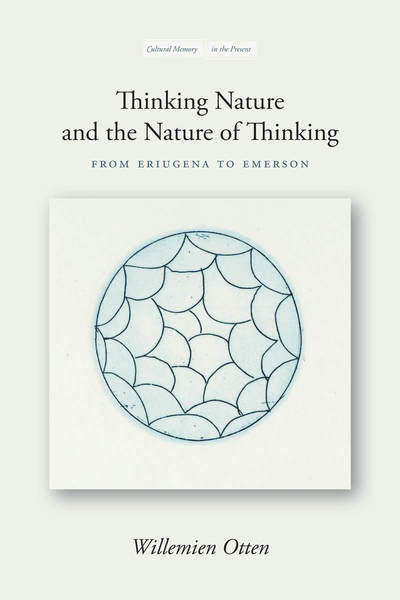 Thinking Nature and the Nature of Thinking
From Eriugena to Emerson
Willemien Otten
SERIES: Cultural Memory in the Present

A fresh and more capacious reading of the Western religious tradition on nature and creation, Thinking Nature and the Nature of Thinking puts medieval Irish theologian John Scottus Eriugena (810–877) into conversation with American philosopher Ralph Waldo Emerson (1803–1882). Challenging the biblical stewardship model of nature and histories of nature and religion that pit orthodoxy against the heresy of pantheism, Willemien Otten reveals a line of thought that has long made room for nature's agency as the coworker of God. Embracing in this more elusive idea of nature in a world beset by environmental crisis, she suggests, will allow us to see nature not as a victim but as an ally in a common quest for re-attunement to the divine. Putting its protagonists into further dialogue with such classic authors as Augustine, Maximus the Confessor, Friedrich Schleiermacher, and William James, her study deconstructs the idea of pantheism and paves the way for a new natural theology.

Willemien Otten is Professor of the History of Christianity and Theology at the University of Chicago Divinity School, where she serves as the Director of the Martin Marty Center for the Public Understanding of Religion.

"In this original and significant study, Willemien Otten presents two major authors for the first time in a comparative perspective. Writing with erudition and elegance, she adds considerably to our understanding of both Eriugena and Emerson, and in doing so establishes herself as a serious religious thinker in her own right."

"This book seeks no less than to reorient theological thinking away from the stale alternatives of natural theology or special revelation and toward a dialogue of self, God, and nature. In Willemien Otten's rich, detailed, and inventive readings, she persuasively illustrates how to engage religiously with religious texts without having to disdain the blessings of secularity."

"Willemien Otten allows us a new recognition—a literal rethinking—of nature. Hers is a dynamic view of nature that calls on us and even on God to listen to it attentively, and that works with many contemporary materialisms while still challenging those insistently atheistic schools of thought. Its place in these conversations is genuinely important."

"Only an accomplished scholar and philosopher in her own right could meet this challenge: pairing ancient and modern thinkers to address one of the most urgent issues of today. Does not nature amount to much more than what we have made of it? Does not nature think more than is thought? Willemien Otten not only ask these questions, she foresees the answer."

"In this very complex exegesis of the theories of ninth-century Irish intellectual Johannes Scotus Eriugena and 19th-century thinker Ralph Waldo Emerson, Otten ... opens a space for an ingenious understanding of nature embedded in the religious thought of two authors distant in time and reputation." –S. A. Mason, CHOICE