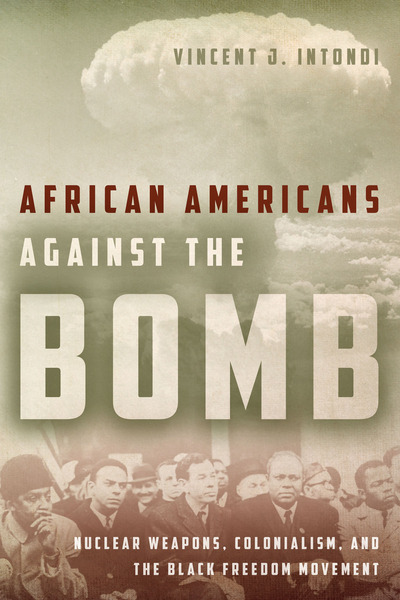 Well before Rev. Dr. Martin Luther King, Jr. spoke out against nuclear weapons, African Americans were protesting the Bomb. Historians have generally ignored African Americans when studying the anti-nuclear movement, yet they were some of the first citizens to protest Truman's decision to drop atomic bombs in Hiroshima and Nagasaki in 1945. Now for the first time, African Americans Against the Bomb tells the compelling story of those black activists who fought for nuclear disarmament by connecting the nuclear issue with the fight for racial equality.

Intondi shows that from early on, blacks in America saw the use of atomic bombs as a racial issue, asking why such enormous resources were being spent building nuclear arms instead of being used to improve impoverished communities. Black activists' fears that race played a role in the decision to deploy atomic bombs only increased when the U.S. threatened to use nuclear weapons in Korea in the 1950s and Vietnam a decade later. For black leftists in Popular Front groups, the nuclear issue was connected to colonialism: the U.S. obtained uranium from the Belgian controlled Congo and the French tested their nuclear weapons in the Sahara.

By expanding traditional research in the history of the nuclear disarmament movement to look at black liberals, clergy, artists, musicians, and civil rights leaders, Intondi reveals the links between the black freedom movement in America and issues of global peace. From Langston Hughes through Lorraine Hansberry to President Obama, African Americans Against the Bomb offers an eye-opening account of the continuous involvement of African Americans who recognized that the rise of nuclear weapons was a threat to the civil rights of all people.

Vincent J. Intondi is Associate Professor of African American History at Montgomery College and Director of Research at the Nuclear Studies Institute of the American University in Washington, D.C.

"Intondi's work provides a significant historiographical contribution to the history of antinuclear activism in the United States . . . Intondi's particular focus on African Americans illustrates the struggles they faced to have their message heard and to not be restricted in the types of activism they could engage in."

"To his great credit, Intondi's study connects two strands of scholarship that are often kept separate, namely peace history and the black freedom struggle . . . [H]is book provides much-needed context for those who, hopefully, will explore such topics. We need more research on activists' efforts to connect opposition to nuclear weapons (and peace issues more broadly) with the black freedom struggle."

"Built on solid archival research, African Americans Against the Bomb raises as many questions as it answers, but it remains an important contribution to broadening our scholarly conceptions of nuclear history . . . The greatest strength of Intondi's work is in providing an overview of the links between the black freedom struggle, colonialism, and nuclear weapons."

"Intondi has produced a well-researched, succinct account of African American involvement in the crusade to contain the threat of atomic warefare . . . Highly recommended"

"The African American contribution to nuclear discourse should be deemed an essential part of the conversation on the fraught history of American nuclear development. Intondi's well-written, well-researched book makes certain these efforts will be known."

"The Civil Rights Movement did not exist in an historical vacuum. Dr. King spoke of the need to fight against 'racism, materialism, and militarism,' and Intondi's stirring narrative effectively shows how nuclear disarmament was part of the broader struggle. This is an important read for those who are interested in properly understanding the black freedom movement and U.S. foreign policy."

—Benjamin Todd Jealous, former President and CEO of the NAACP

"As a young man I was moved by two issues, civil rights and the threat of nuclear war, and it took me many years to understand how those crises were inseparable. Vincent Intondi's original research will shake the complacent assumption that the civil rights and anti-nuclear movements could be segregated. Intondi shows that ever since the Bomb first was dropped on people of color in 1945, African-Americans have been in the forefront of the campaign to stop the deployment of nuclear weapons. He corrects a historical misunderstanding and contributes to an important new perspective on our history. A brilliant first book by a young historian seeing the world with new eyes."

—Tom Hayden, Director of the Peace and Justice Resource Center

"Intondi's work provides a significant historiographical contribution to the history of antinuclear activism in the United States...Intondi's particular focus on African Americans illustrates the struggles they faced to have their message heard and to not be restricted in the types of activism they could engage in."

"This exclusive focus on anti-nuclear activism provides a much-needed addition to the small but growing scholarship on those who opposed nuclear weapons throughout the Cold War and beyond. Intondi's narrative is detail-oriented yet readable, and examines a vast array of Black voices discussing nuclear weapons within the broader contexts of civil rights, colonialism, and peace. He uses an impressive array of Black newspapers, as well as a large archival base, to cover the anti- nuclear sentiments of clergy, union leaders, civil rights organizers, pacifists, civic leaders, and more."

"African Americans Against the Bomb—a well-written, well-researched historical study by Vincent Intondi—explores an important subject: African-American resistance to nuclear weapons...Intondi's pioneering study will serve as an important guide to this intriguing subject."

Boston Review
The U.S. and the 70th Anniversary of the Atomic Bomb

The Huffington Post
Common cause: African-American objections to nuclear bombs

Boston Globe
W.E.B. Du Bois to Malcolm X: The Untold History of the Movement to Ban the Bomb