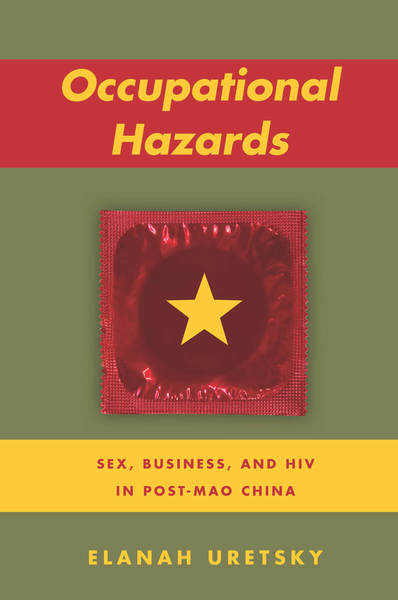 Doing business in China can be hazardous to your health. Occupational Hazards follows a group of Chinese businessmen and government officials as they conduct business in Beijing and western Yunnan Province, exposing webs of informal networks that help businessmen access political favors. These networks are built over liquor, cigarettes, food, and sex, turning risky behaviors into occupational hazards.

Elanah Uretsky's ethnography follows these powerful men and their vulnerabilities to China's burgeoning epidemics of sexually transmitted infections (STIs) and HIV/AIDS. Examining the relationship between elite masculine networking practices and vulnerability to HIV infection, Occupational Hazards includes the stories of countless government officials and businessmen who regularly visit commercial sex workers but resist HIV testing for fear of threatening their economic and political status. Their fate is further complicated by a political system that cannot publicly acknowledge such risk and by authoritative international paradigms that limit the reach of public health interventions. Ultimately, Uretsky offers insights into how complex socio-cultural and politico-economic negotiations affect the development and administration of China's HIV epidemic.

"In revealing how business practices impinge on free time and even enter the bedroom, Uretsky challenges the assumption that reforms in China have led to a decline in Party interference in personal life. This remarkable book uncovers the interaction between work, Party appointment and entertainment in Southwest China."

"Elanah Uretsky's forceful ethnography examines the entrenched male rituals of doing business in China, which include banqueting, drinking, smoking, and sexual entertainment—much to the detriment of these men's integrity and health, and to China's HIV/AIDS epidemic more broadly. Occupational Hazards is an important contribution to our understanding of this simultaneously powerful and vulnerable population, and to our understanding of public health in China."

"Occupational Hazards paints a detailed portrait of the ways in which gender, sexuality, and health-related risks are embedded within social relations and cultural practices. Elanah Uretsky's book is an exceptional ethnographic study offering critical insights into HIV and AIDS—and global health more broadly."

"This book is ethnographically rich and is an intriguing read. It will be welcomed by a wide array of scholars interested in topics such as HIV/AIDS, public health, and gender and sexuality in China and beyond."

"Elanah Uretsky provides a rich, detailed ethnography of the entertaining practices and sexual lives of male government officials in Ruili (Yunnan province), where she conducted her fieldwork in the early 2000s. Uretsky marshals this ethnographic data to develop a powerful critique of dominant public health paradigms surrounding STIs and HIV...By weaving together arguments about sexuality, gender, work, borders, and governance, Uretsky crafts a very compelling account of the structures which inform and enable medically "risky" behavior among elite men in China. Any serious attempt to combat HIV, STIs, or even chronic disease in China will have to contend with her findings."