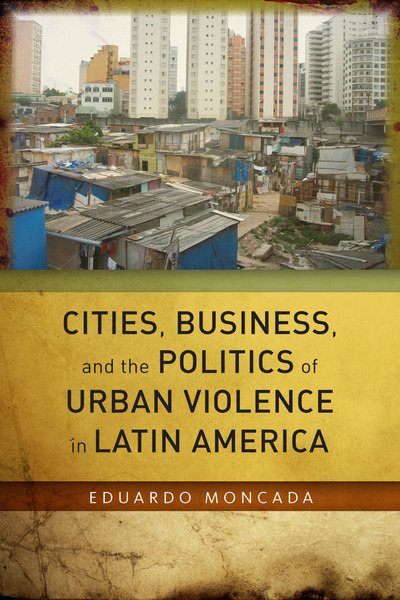 Cities, Business, and the Politics of Urban Violence in Latin America
Eduardo Moncada

This book analyzes and explains the ways in which major developing world cities respond to the challenge of urban violence. The study shows how the political projects that cities launch to confront urban violence are shaped by the interaction between urban political economies and patterns of armed territorial control. It introduces business as a pivotal actor in the politics of urban violence, and argues that how business is organized within cities and its linkages to local governments impacts whether or not business supports or subverts state efforts to stem and prevent urban violence. A focus on city mayors finds that the degree to which politicians rely upon clientelism to secure and maintain power influences whether they favor responses to violence that perpetuate or weaken local political exclusion. The book builds a new typology of patterns of armed territorial control within cities, and shows that each poses unique challenges and opportunities for confronting urban violence. The study develops sub-national comparative analyses of puzzling variation in the institutional outcomes of the politics of urban violence across Colombia's three principal cities—Medellin, Cali, and Bogota—and over time within each. The book's main findings contribute to research on violence, crime, citizen security, urban development, and comparative political economy. The analysis demonstrates that the politics of urban violence is a powerful new lens on the broader question of who governs in major developing world cities.

"Anyone who reads this impressive and well-researched book will see that urban violence in Latin America can only be understood by paying careful and close attention to business. This is an important contribution."

"This book provides a critical look at the construction of municipal coalitions that can effect transformational change in criminal justice policy in Latin America. Building on rich and nuanced work in three Colombian cities, Moncada advances our understanding of how municipalities provide security to their citizens in dangerous times."

"Eduardo Moncada has produced a well-researched, engaging, and novel study of the micro-dynamics of reducing urban violence. His in-depth comparative analysis of three Colombian cities reveals three factors that interact to successfully reduce violence: evolving city government-business relations, changes in the level and type of violence, and shifting power and control among armed non-state actors. Moncada's project fills a gap in the existing literature, offering a framework for overcoming its limitations."

"Urban violence carries with it profound human, social, and economic costs—and it can vary with dramatic swings that puzzle citizens, scholars, and politicians alike. With Cities, Business, and the Politics of Urban Violence in Latin America, Eduardo Moncada provides an extremely insightful contribution to our understanding of this phenomenon, which drives elections and debates in cities well beyond Latin America the book provides key lessons for scholars interested in violence and urban issues, regardless of their regional focus."

"This book is a consummate piece of deliberate and nuanced social science scholarship. It is carefully crafted, rich with analytic importance and built upon a research design that should be much more thoroughly used in political science today. The comparative method, which recognises cities (rightly) as sites of power and agency, is a substantial contribution to ongoing debates to the discipline and the study of Latin America. In addition, I find Moncada's work to be a very welcome qualitative and locally situated contribution in a field that increasingly side-steps larger questions of context in favour of method. Moncada's contribution is, then, substantial in two ways. He offers us important new knowledge about the role of elites as a lever for effective policy, and a diligent and situated method for answering pressing comparative urban questions that rightly does not take 'the State' as a normative departure point. I eagerly recommend this book to colleagues and students in Latin American studies and beyond. "

"[A] well-researched account of the impact of organized criminal violence on the ways that political authorities respond to the everyday needs of urban residents....Moncada's work places political relations, political parties, and political regimes—not merely violence perpetrators and their victims—into the picture."

"Moncada rightfully critiques the all- too-common practice of excluding business in studies of violence, an important stakeholder whose influence in shaping state responses and outcomes has been under- estimated and underexplored. He thus incorporates into his framework a thorough analysis of how the nature of the business sector shapes its preferences over security policy, while the degree of cohesion and engagement with the state shapes its ability to influence the government's political project."