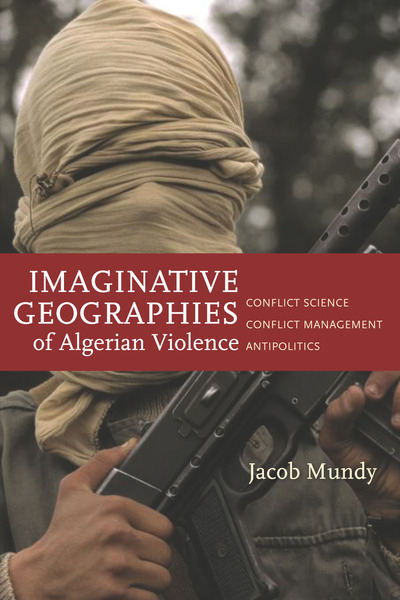 The massacres that spread across Algeria in 1997 and 1998 shocked the world, both in their horror and in the international community's failure to respond. In the years following, the violence of 1990s Algeria has become a central case study in new theories of civil conflict and terrorism after the Cold War. Such "lessons of Algeria" now contribute to a diverse array of international efforts to manage conflict—from development and counterterrorism to the Responsibility to Protect doctrine and transitional justice.

With this book, Jacob Mundy raises a critical lens to these lessons and practices and sheds light on an increasingly antipolitical scientific vision of armed conflict. Traditional questions of power and history that once guided conflict management have been displaced by neoliberal assumptions and methodological formalism. In questioning the presumed lessons of 1990s Algeria, Mundy shows that the problem is not simply that these understandings—these imaginative geographies—of Algerian violence can be disputed. He shows that today's leading strategies of conflict management are underwritten by, and so attempt to reproduce, their own flawed logic. Ultimately, what these policies and practices lead to is not a world made safe from war, but rather a world made safe for war.

Jacob Mundy is Assistant Professor of Peace and Conflict Studies at Colgate University. He is coauthor of Western Sahara: War, Nationalism and Conflict Irresolution (2010).

"Jacob Mundy's Imaginative Geographies of Algerian Violence is a scathing critique of the internal pathologies of neoliberal conflict management. With great finesse, Mundy dissects the often-contradictory scaffolding scholars and policymakers built to frame, explain, and define the Algerian Civil War. A must-read for scholars of conflict studies, this book fills a major void in scholarship on post-independence Algeria, and will surely be a valuable resource to political scientists and historians working on the Middle East and North Africa, post Arab Spring."

"Jacob Mundy's uncompromising, pugnacious book takes all the complexities of the Algerian conflict in the 1990s and makes from them an excoriating critique of prevailing assumptions in studies of 'new wars,' civil wars and counterinsurgency. As meticulously detailed as it is sweeping in judgment, this should be essential reading as an antidote to the anti-political, ahistorical tendencies of 'conflict science.'"

"Jacob Mundy has written a disturbing book in every sense of the word. His work unsettles the conflict paradigms of the post-Cold War world and will influence our study of civil war, terrorism, and mass atrocities for a long time to come."

"Mundy's Imaginative Geographies of Algerian Violence is surely one of the smartest books written on the Algerian Dark Decade (1992–1999), even though it is,strictly speaking, not a book about Algeria. The author's goal is indeed to useAlgeria as case study to critique mainstream 'conflict sciences' and management as these were refashioned after the Cold War. He implacably unveils the weaknesses

of their antipolitical frameworks."

"It is impossible in such a short review to do full justice to the many topics Mundy examines in this provocative and often damning account. From the discussion of counterterrorism, to the Responsibility to protect (R2p) that grew out of the United Nations intervention in Serbia, to the question of 'humanitarianization,' and truth and reconciliation commissions, Mundy uses the Algerian case to problematize the nature or construction of the violence itself, as well as the Western response (or lack thereof) to it."

" ... Imaginative Geographies of Violence provides a wealth of historical information about the Algerian conflict and its various imaginaries."

"Imaginative Geographies offers topical and methodological guidance to those currently engaged in the academic introspection invited and made necessary by the onset and development of the Arab Spring [This] book says much of interest and importance to conflict and security, and area studies, and deserves to be widely read."

"Imaginative Geographies of Algerian Violence is a well-argued study about the weaknesses of contemporary efforts to manage violence, explaining that it reveals the "antipolitics" in the framing of understanding and managing conflict in Algeria during the 1990s...The book nicely problematizes foreign intervention and conflict management by looking at Algerian violence in the 1990s."––Ryan Shaffer, Terrorism & Political Violence

Recommended 2015 Books From and About the Arab World