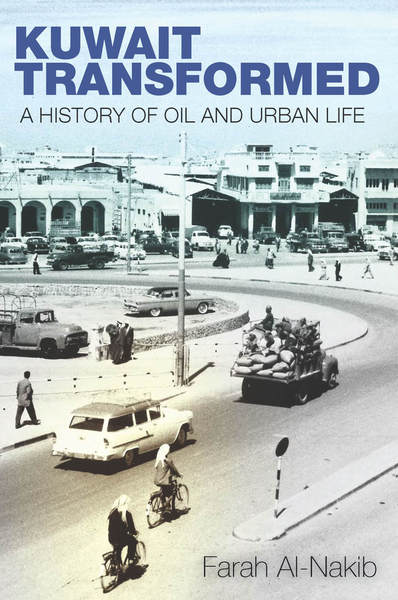 Winner of the 2017 AGAPS Book Award, sponsored by The Association for Gulf and Arabian Peninsula Studies (AGAPS).

In Kuwait Transformed, Farah Al-Nakib connects the city's past and present, from its settlement in 1716 to the twenty-first century, through the bridge of oil discovery. She traces the relationships between the urban landscape, patterns and practices of everyday life, and social behaviors and relations in Kuwait. The history that emerges reveals how decades of urban planning, suburbanization, and privatization have eroded an open, tolerant society and given rise to the insularity, xenophobia, and divisiveness that characterize Kuwaiti social relations today. The book makes a call for a restoration of the city that modern planning eliminated. But this is not simply a case of nostalgia for a lost landscape, lifestyle, or community. It is a claim for a "right to the city"—the right of all inhabitants to shape and use the spaces of their city to meet their own needs and desires.

Farah Al-Nakib is Assistant Professor of History and Director of the Center for Gulf Studies at the American University of Kuwait.

"Farah Al-Nakib debunks some tenacious myths about modernist urban planning: far from creating a happier, more productive urban environment, it fostered bleak suburbs marked by class, gender, and race segregation. Her superb book is a hymn to everyday Kuwaitis who, after sixty years of urban upheaval, struggle to reclaim the right to their city."

"Farah Al-Nakib's critical eye and eloquent prose illuminate questions that have engaged generations of urban theorists, historians and activists: the destructive and alienating nature of modernism, the real and the ideal of urban pasts, and the loss of city's ownership. Kuwait Transformed is a brilliant achievement whose relevance goes far beyond the Gulf region and the Middle East, and a must read for all those interested in critical urbanism."

"This beautifully written and compelling narrative explains both Kuwait's cosmopolitan history as a diverse port city and the fundamental transformation of its urban life, urban space, and political life. It is replete with a wealth of historicized and contextualized insights and is a must read for those interested in a spatial reading of Kuwaiti history, urbanity and development."

"Al Nakib, a historian, is a wonderfully clever detective who knows her city and its streets well. She searches archives and memoirs, make[s] excellent use of the social theory from David Harvey, Henri Lefebvre, Ash and Amin, and others."

"Kuwait's relationship to its neighbors, India and East Africa, is equally valuable as an equally dynamic city-state with a different cultural context. Al-Nakib's book therefore provides much needed depth in the history and consequences of urban development in the Middle East region."

"Al-Nakib's monograph is situated firmly within a contemporary critical urbanism agenda and, in employing oral history interviews as well as archival data in her methodology, she manages to create a rich and holistic picture of urban change in the metropolis. The author herself is Kuwaiti, and her deep and intimate engagement with the city is evident through the pages of the text."

"Kuwait Transformed: A History of Oil and Urban Life is a remarkable book, enlightening and solid, that reflects the maturity of scholarship on the Persian Gulf and by Gulf nationals....[Al-Nakib] has been keen to frame this task in academic terms that transcend the local and project the process into its global context and comparative theoretical dimensions. In that she has been utterly successful and brings us a story that runs like a detective novel, weaving the various dimensions of a very complex and evolving change process and thus unveiling the historical trajectory and elements behind the creation of modern Kuwait and its current society."

"The section on Kuwait's history is illuminating, full of rich detail and analysis, and makes it recommended reading."

"[Al-Nakib's] deep critique of the alienating nature of modern planning policies and practices renders the book significant not only to researchers on Kuwait, but also to others interested in urbanism in the wider region and even beyond....A great read."