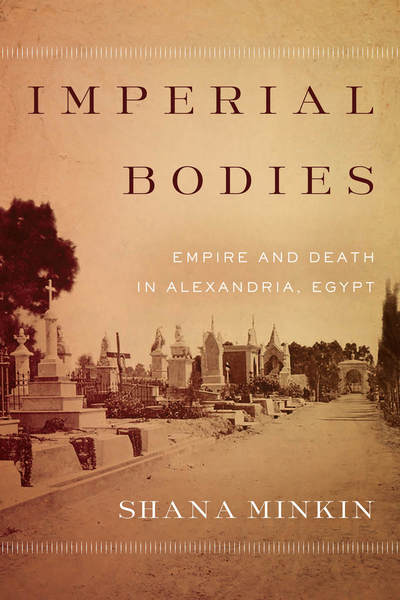 At the turn of the twentieth century, Alexandria, Egypt, was a bustling transimperial port city, under nominal Ottoman and unofficial British imperial rule. Thousands of European subjects lived, worked, and died there. And when they died, the machinery of empire had to negotiate for space, resources, and control with the nascent national state. Imperial Bodies shows how the mechanisms of death became a tool for exerting both imperial and national governance.

Shana Minkin investigates how French and British power asserted itself in Egypt through local consular claims of belonging manifested within the mundane caring for dead bodies. European communities corralled imperial bodies through the bureaucracies and rituals of death—from hospitals, funerals, and cemeteries to autopsies and death registrations. As they did so, imperial consulates pushed against the workings of both the Egyptian state and each other, expanding their governments' material and performative power. Ultimately, this book reveals how European imperial powers did not so much claim Alexandria as their own, as they maneuvered, manipulated, and cajoled their empires into Egypt.

Shana Minkin is Associate Professor of International and Global Studies at Sewanee: The University of the South.

"Through her in-depth research on death as a historical actor, Shana Minkin reveals new dimensions of the interactions among empires, foreign forces, and the local Egyptian national governance in their struggle over resources, space, and land. Thus, Minkin offers the reader no less than an entirely new reading of the history of colonial Alexandria under British rule, and the reactions of its imperial subjects. Imperial Bodies is an outstanding accomplishment, innovative and insightful."

"Shana Minkin's book is empirically rich, theoretically sophisticated, and lucidly written. This social history of death in Alexandria offers a unique perspective on the practices that defined the European imperial project."

"Shana Minkin's work on imperial death studies greatly enriches a Middle East field too long concerned with only big actors and forces of colonialism. Those who found final rest far from home deeply troubled consular agents whose mandate came to include communities of the deceased in Egypt and elsewhere. Imperial Bodies represents local and global history at its very best."

"Imperial Bodies is most useful for students of empire, particularly those who work transnationally....[Minkin's] construction and use of an alternative archive—the bodies of imperial subjects—is inventive and instructive."