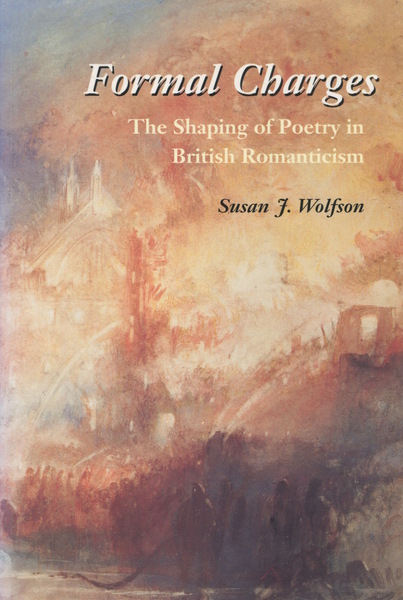 Winner of the 1997 Jean-Pierre Barricelli Prize for the best work in Romanticism Studies, sponsored by the American Conference on Romanticism.

Why care about poetic form and its intricacies, other than in nostalgia for a bygone era of criticism? The purpose of this book is to refresh today this care for criticism, applying a historically aware formalist reading to poetic form in Romanticism and showing how in theory and practice Romantic writers addressed, debated, tested, and contested fundamental questions about what is at stake in the poetic forming of language. In the process, it suggests the importance of these conflicted inquiries for contemporary critical discussion and demonstrates the pleasures of attending to the complex changes of form in poetic writing.

After an introductory chapter on the controversies about poetic form and formalism from the Romantic era to our own, succeeding chapters consider particular instances in Romantic poetry in which experimental agendas or unsettled traditions promote an awareness of new textual possibilities. The author shows how Blake's Poetical Sketches predicts many of the key issues of Romantic theory and practice, and how Coleridge's ambivalent engagement with simile impels him to address the very foundations of poetic form. A chapter on Wordsworth's revision of an episode in The Prelude demonstrates how a repeated reworking of form virtually characterizes the work of autobiography, and the dilemma of self-formation is also the focus of a chapter on Byron's seemingly perverse choice of the heroic couplet in The Corsair.

Keats, too, is shown to wrestle with the issue of self and form at the end of his career in his personal lyrics to Fanny Browne, which subverted the formalism of the "Great Odes" of 1819, the celebrated icons of New Criticism. A final chapter describes Shelley's investment of poetic performance with social agency in two seemingly opposite but related modes—the political exhortation of The Mask of Anarchy and the intimate addresses to Jane and Edward Williams. In an afterword, the author reviews recent attacks on formalist criticism and argues for the specific value of shaped language as one of the texts in which culture is written and revised.

Susan J. Wolfson is Professor of English at Princeton University.

"This book is the real thing: learned, patient, thoroughly researched, fresh, corrective, and expertly written. It confronts the chill that has descended on the major poetic texts of Romantic studies from the anti-formalist animus of certain latter-day practitioners with a cool authority all its own. This is counter-critique at its very best."

"A fine book that consciously flies in the face of prevailing critical currents through its detailed emphasis on poetic form in the big six Romantic poets. . . . This is a first-rate book—persuasive, well written, and with the interpretive radar on high."

"Wolfson's strengths are comprehensiveness and attention to process; her book includes and excellent introductory chapter on the history of formalism that reviews critical debates that have erupted over how poetry reforms traditional practice."

"The publication of Susan Wolfson's ...book Formal Charges is a terribly important event, not only in the history of Romantic Studies, but in the history of the theoretical discourses currently questioning whether the study of literature should become Cultural Studies, and asking to what extent the practice of aesthetic appreciation should be abandoned for political criticism."

—Romanticism on the Net