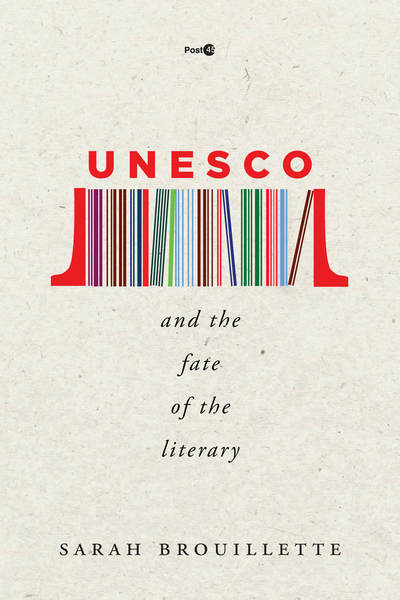 UNESCO and the Fate of the Literary
Sarah Brouillette
SERIES: Post*45

Shortlisted in the 2020 ASAP Book Prize, sponsored by the Association for the Study of the Arts of the Present (ASAP).

A case study of one of the most important global institutions of cultural policy formation, UNESCO and the Fate of the Literary demonstrates the relationship between such policymaking and transformations in the economy. Focusing on UNESCO's use of books, Sarah Brouillette identifies three phases in the agency's history and explores the literary and cultural programming of each. In the immediate postwar period, healthy economies made possible the funding of an infrastructure in support of a liberal cosmopolitanism and the spread of capitalist democracy. In the decolonizing 1960s and '70s, illiteracy and lack of access to literature were lamented as a "book hunger" in the developing world, and reading was touted as a universal humanizing value to argue for a more balanced communications industry and copyright regime. Most recently, literature has become instrumental in city and nation branding that drive tourism and the heritage industry. Today, the agency largely treats high literature as a commercially self-sustaining product for wealthy aging publics, and fundamental policy reform to address the uneven relations that characterize global intellectual property creation is off the table. UNESCO's literary programming is in this way highly suggestive. A trajectory that might appear to be one of triumphant success—literary tourism and festival programming can be quite lucrative for some people—is also, under a different light, a story of decline.

Sarah Brouillette is Professor of English at Carleton University and the author of Literature and the Creative Economy (Stanford, 2014).

"Brouillette brings to our attention a signal institution of postwar global culture, one that has been all but entirely ignored in previous studies of world literature. In her impressive and bracingly severe account, UNESCO becomes an institutional lens through which we can see the much larger and more powerful set of economic realities that have shaped our sense of what role literature should play in the world at large."

"This book adds another dimension to Brouillette's already impressive scholarship on postcolonial literature and the global economic downturn. With bracingly rigorous yet refreshingly traditional methodology, she provides a bravura demonstration of nuanced, non-reductive Marxist analysis."

"In her probe of UNESCO's transformations, Sarah Brouillette skewers the complacency of the reading class. Readers of this book, all of whom will be members of this class, will be enlightened, troubled, and perhaps mortified by their participation in the consolations of the literary world, including its most critical and politically aware corners. Brouillette's analysis is both necessary and devastating."

"Sarah Brouillette's excellent new book, UNESCO and the Fate of the Literary, grounds the category of 'world literature' in the only literary institution capable of matching the concept's scale....[Her] book is a powerful argument for the modest power of literature, however long it lasts."