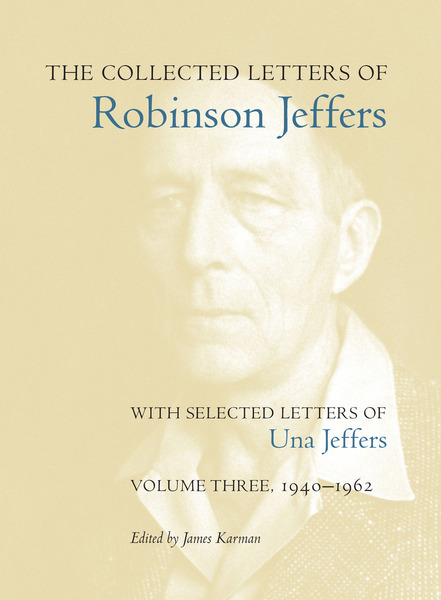 This volume of correspondence, the last in a three-volume edition, spans a pivotal moment in American history: the mid-twentieth century, from the beginning of World War II, through the years of rebuilding and uneasy peace that followed, to the election of President John F. Kennedy. Robinson Jeffers published four important books during this period—Be Angry at the Sun (1941), Medea (1946), The Double Axe (1948), and Hungerfield (1954). He also faced changes to his hometown village of Carmel, experienced the rewards of being a successful dramatist in the United States and abroad, and endured the loss of his wife Una. Jeffers' letters, and those of Una written in the decade prior to her death, offer a vivid chronicle of the life and times of a singular and visionary poet.

"This meticulous edition of his letters, many previously unpublished, profoundly complicates our understanding of Jeffers the person, offers powerful insights into his poetry, provides an important context for understanding the literary culture of California in the 1920s and 1930s, and reminds us that Modernism was an aspect of modern poetry and not the whole of it."

"What Stanford University Press accomplished in The Collected Letters of Jack London, it is now accomplishing on behalf of another giant of American letters. In The Collected Letters of Robinson Jeffers, Professor James Karman is setting new standards for skillful editing, and the project itself, now underway, will further establish Jeffers as a leading American poet of prophetic vision."

"The Collected Letters of Robinson Jeffers, with Selected Letters of Una Jeffers represents a truly important addition to American literary scholarship. Not only was Jeffers a great Modernist poet, he was the only major one writing from the western half of the United States. In these splendidly edited volumes of his and his wife's letters, we are finally able to glimpse into the life and mind of this prophetic figure."